Akins explained that not all electric grids are created equal, but the industry is at the leading edge of a transition to cleaner, renewable power. In the dead of winter in cold climates, renewables alone will not be enough.

Akin said that industrial activity continues to pick up as companies make up for lost time. Meanwhile, the work-from-home economy continues to propel residential electric demand.

Finally, when asked about the sale of Kentucky Power for $2.8 billion, Akins explained that as the company transitions, portfolio adjustments will need to be made.

We looked at the chart of AEP on July 23 where we wrote that "Traders could continue to hold long positions in AEP for the yield and potential price appreciation. The $97 area is our nearest price target." Let's check on the charts again.

In this updated daily bar chart of AEP, below, we can see that prices rallied from late July into late August but then retreated into late September. The late May low was broken but prices appear to have respected that support level since then. AEP is trading below the declining 50-day moving average line and the rising 200-day line.

The On-Balance-Volume (OBV) line declined in September but looks like it is stable now. The Moving Average Convergence Divergence (MACD) oscillator just failed at the underside of the zero line.

In this weekly Japanese candlestick chart of AEP, below, we can see that prices have been stuck around the 40-week moving average line the past few weeks. The weekly OBV line is neutral to slightly weak as it has mirrored the price action recently. The MACD oscillator has fallen below the zero line for a sell signal.

In this daily Point and Figure chart of AEP, below, we can see an upside price target in the $92 area. A trade at $79.84 or lower will probably weaken the chart. 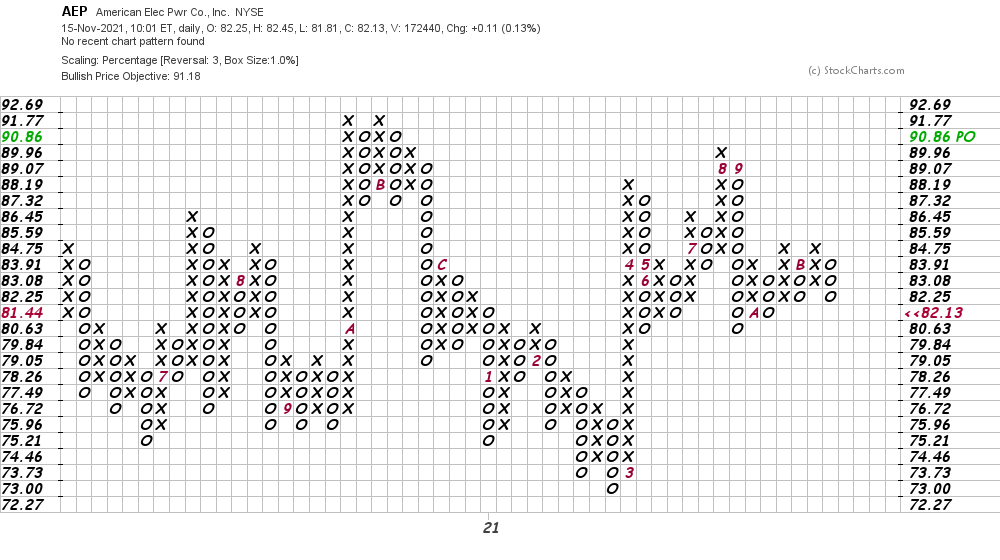 Bottom line strategy: The fundamental story with AEP sounds positive and the yield on AEP is attractive but the charts suggest to me that traders are focused on something else. Hold previous longs in AEP but let's have a stop just below $79.84.

Get an email alert each time I write an article for Real Money. Click the "+Follow" next to my byline to this article.
TAGS: Fundamental Analysis | Investing | Stocks | Technical Analysis | Trading | Utilities | Mad Money | Executive Interview