Parker explained that American has invested $31 billion to upgrade and modernize its fleet, and that it now has the youngest fleet in the business. Those investment costs will be dropping off quickly, he noted, which will be a big boost to cash flows.

When asked about the competitive environment, Parker said the airline business is always competitive. Consumer demand remains strong, he said.

Finally, Parker spoke about Boeing's (BA) 737 Max. He said Boeing failed to deliver on their promises and the $540 million loss American has suffered should not be paid by American's shareholders. When asked about the plans to return the aircraft to service, Parker said American's pilots are heavily involved with both Boeing and the Federal Aviation Administration, and when American Airlines' pilots say the plane is safe, it will be safe.

Let's check and see if the charts are safe for purchase. In this daily bar chart of AAL, below, we can see that prices and the indicators have improved significantly this month. Prices are trading above the now rising 50-day moving average line and above the still declining 200-day line.

The daily On-Balance-Volume (OBV) line moved above its September peak to make a higher high and start an uptrend. A rising OBV line tells us that buyers are more aggressive, which is different than the declining pattern we have seen since November. The Moving Average Convergence Divergence (MACD) oscillator just moved above the zero-line for an outright go-long signal.

In this weekly bar chart of AAL, below, we can see that prices have been in a decline from early 2018. We can now see a small double-bottom around $25, and that prices are testing the underside of the bottoming 40-week moving average line. The weekly OBV line shows a similar double-bottom, and the weekly MACD oscillator crossed to the upside from below the zero-line for a cover shorts buy signal.

In this Point and Figure chart of AAL, below, we can see that an upside price target of $36 is projected. A rally to $36 would break all the highs going back to February and would probably precipitate further gains. 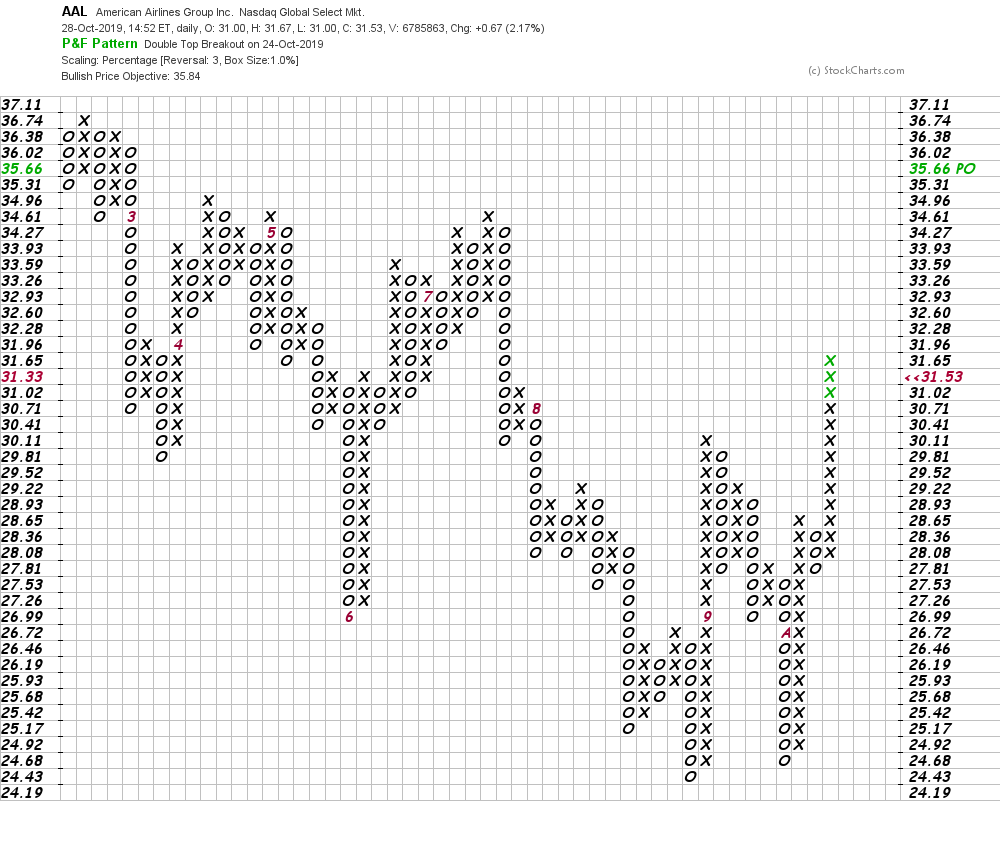 Bottom line strategy: AAL has made a nice turnaround. I want to be a buyer of AAL, but on a one- to three-day pullback and then risk a close below $28.

Get an email alert each time I write an article for Real Money. Click the "+Follow" next to my byline to this article.
TAGS: Investing | Technical Analysis | Airlines | Transportation | Mad Money | Executive Interview