Sticking with adjusted metrics, AMD produced a gross margin of 50%, up from 45% a year ago, and 48% for the third quarter. Operating expenses increased 40%, while operating income increased 100%... that's right, a double. Operating margin increased to 27%, from 20% a year ago, and from 24% a quarter ago. This led to net income that increased 76.4%.

- Computing and Graphics... revenue was up 32% over last year and 8% sequentially to $2.6B. The gains were driven by sales of both Ryzen and Radeon processors. Client processor average selling prices (ASP) increased due to a richer mix of Ryzen processor sales, while GPU ASP (Radeon) increased year over year, but decreased quarter over quarter. Operating income increased 34.8% to $566M.

- Enterprise, Embedded, and Semi-Custom... revenue was up 75% over last year and 17% sequentially. These gains were driven by increased sales of EPYC and semi-custom processors. Operating income increased 214% to $762M.

On 2021... "2021 was an outstanding year for AMD with record annual revenue and profitability. Each of our businesses performed well, with data center revenue doubling year over year driven by growing adoption of AMD EPYC processors across cloud and enterprise customers. We expect another year of significant growth in 2022 as we ramp our current portfolio and launch our next generation of PC, gaming, and data center products."

On Xilinx (XLNX) ... "We are pleased to announce that China's State Administration for Market Regulation approved the transaction on January 27th. The only remaining regulatory approval required is FTC approval of our HSR refiling, and we expect to close the transaction in the final quarter of 2022. I am more excited than ever about the benefits of the acquisition for both AMD and Xilinx stakeholders."

On logistics... "We've been working on the supply chain for the last four or five quarters, knowing the growth we have from a product standpoint. We've made significant investments in wafer capacity and substrate capacity and backend capacity. We feel very good about our ability to meet the guidance."

For the current quarter, AMD sees revenue of roughly $5B (+/- $100M) versus the $4.34B that Wall Street had in mind. That number would be good for year over year growth of 45%. For the full year 2022, AMD sees revenue of about $21.5B, which would be good for growth of 31% from full year 2021, and well above consensus view of $19.27B. Growth for the quarter and for the year is expected to be driven by growth across all businesses.

Over the past year, AMD's net cash position has grown more than $1.3B to $3.608B. Current assets are up more than $2.4B to $8.583B, which is nearly three times the size of net liabilities. Total assets are up a rough $3.5B to $12.419B. This dwarfs total liabilities that are barely any larger than current liabilities less equity. The firm has literally little to no exposure to long-term debt, just a small amount of lease liabilities on the books. This balance sheet is not just strong, this balance sheet is fortress-like. 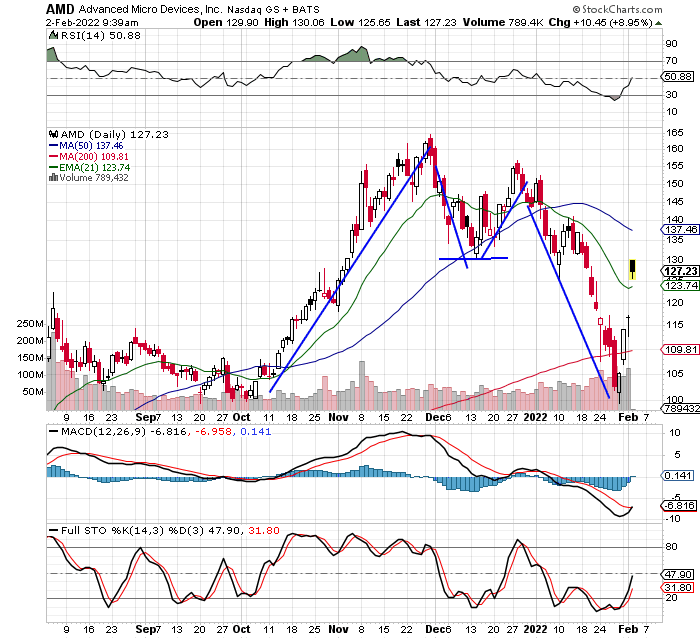 It appears that AMD is now snapping back smartly after suffering a 23% decline beyond a $130 downside pivot created by a double top reversal pattern. The shares are now up significantly from last Friday's low of $99.35 and have retaken its own 200 day SMA (Monday) and now, the 21 day EMA. Will the stock have to fill the gap created this morning? More often than not, yes.. unfilled gaps do fill, but timing is in my opinion, impossible.

The good news is that even now, AMD's Relative Strength is just hitting neutral, the Full Stochastics Oscillator is still closer to oversold territory than to overbought territory and the daily MACD is just getting started. In my opinion, AMD is still a long-term investment, and it certainly appears that AMD already is, and will continue to be, Nvidia's (NVDA) toughest competitor for the cutting edge of the high end of the semiconductor industry. Intel (INTC) is not even in the same area code any more.

(AMD and NVDA are holdings in the Action Alerts PLUS member club. Want to be alerted before AAP buys or sells these stocks? Learn more now.)