The news on Monday morning was a little surprising. Long-time Sarge fave Advanced Micro Devices (AMD) had agreed to acquire edge computing startup Pensando for about $1.9B... just weeks after closing the $50B deal to acquire Xilinx. It wasn't long before another long-time Sarge fave, AMD CEO Lisa Su herself, was out and about talking up the deal, and her firm.

Su appeared at CNBC, She spoke about "doubling down on the data center" where the firm competes against the likes of Nvidia (NVDA) and Marvell Technology (MRVL) as well as others. She spoke about the hit and miss environment of selling processors for PCs, where the firm has taken share away from Intel (INTC) . Su also spoke on gaming where even though not quite as hot as the data center, growth remains strong. AMD provides GPUs to both Microsoft (MSFT) and Sony (SONY) for their gaming consoles and competes here against the likes of Nvidia as well. On Gaming, Su said, "It's a very strong gaming cycle here this year and into '23 and beyond."

AMD is expected to report the firm's first quarter financial results in three weeks. Consensus view is currently for EPS of $0.92, with a range spanning from $0.84 to $0.96. Expectations on the revenue generation side are for about $5.6B. The range for top line results spans from $5.5B to $5.67B. Should AMD report precisely on expectations, these numbers would amount to earnings growth of 77% on revenue growth of 62%. This would maintain the pace of earnings growth of 78% and 77% the last two quarters and accelerate sales growth from the 54% and 49% reported for those same two quarters. In short, AMD is and has been about as hot as it gets. Yet, the stock trades at "just" 27 times forward looking earnings, less Marvell's 31 times and Nvidia's 48 times, two firm's growing performance similarly.

Fundamentally, Advanced Micro Devices is in great shape. A net cash balance more than five times total debt, A very healthy current ratio of 2.02, and total assets that run at about two and a half times total liabilities less equity. As of the end of the fourth quarter, AMD had a tangible book value of $5.70 per share, while producing free cash flow of $2.65 per share for that quarter. AMD passes all of the Sarge tests with flying colors.

I may have a bias. That said, I see AMD more likely to take further share from Intel, especially now, after the Xilinx takeover, than market share is likely to go the other way. I think acquisitions like Pensando better prepare the firm to defend itself in the data center (and gaming) in what will be a serious turf war among the more elite processor manufacturers. I like AMD in terms of valuation and leadership. Can the stock still come in? Of course it can. Demand, in my opinion... is going nowhere. Dips in AMD, from my view, are to be used for the purpose of share accumulation. 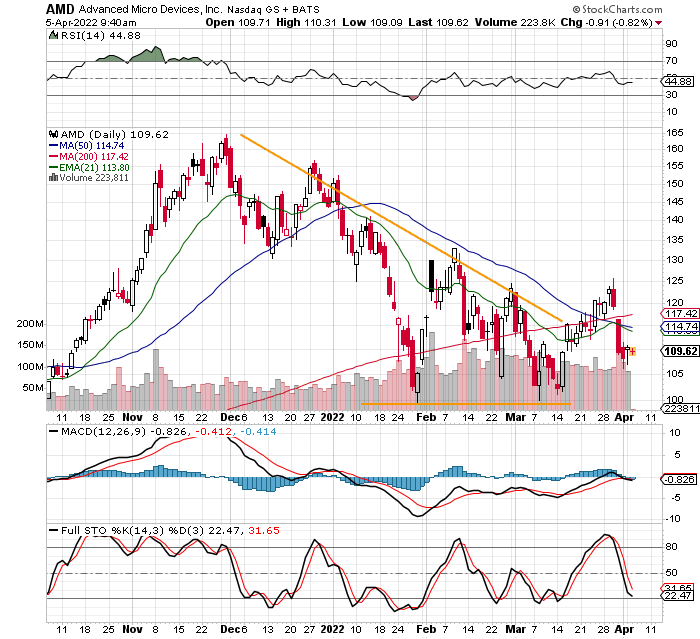 Readers will see that a descending triangle had been in place (which is bearish) and that the triangle was disrupted as it came to a close in mid-March. Though the shares have again come in, and surrendered all three of our more important moving averages (21 day EMA, 50 day SMA, 200 day SMA), I don't think I run for the hills here.

The stock has found support at an even $100 twice now. That is the serious line that we don't want to see break. This makes for me, with no discernible pattern in place, the 200 day SMA, currently at $117.42, the moving pivot. Readers will note that we have had to make some adjustments.

(AMD, NVDA, MRVL, MSFT is a holding in the Action Alerts PLUS member club. Want to be alerted before AAP buys or sells these stocks? Learn more now.)