Amazon.com Inc. (AMZN) was last reviewed in late October. At the time I wrote, "The lower AMZN goes on the chart the weaker it looks. AMZN could bounce, but I fear it will only happen from a lower price area." I also showed a Point and Figure chart with a price target around $1,450. Now that the Point and Figure chart has been reached, a fresh look at the charts is in order for Amazon, which is a holding of Jim Cramer's Action Alerts PLUS charitable trust.

In this daily Japanese Candlestick chart, below, we can see some interesting technical developments. Prices are below the declining 50-day simple moving average line, which has been negative since early October. Prices are also below the cresting 200-day line. Notice the volume pattern, with very heavy volume spikes in October and less volume done in late November as prices made a lower low. This decline in volume despite prices making a new low for the move down suggests that sellers were sated.

The daily On-Balance-Volume (OBV) line shows a peak in early September, telling us that sellers of AMZN have been more aggressive for nearly three months now. The trend-following Moving Average Convergence Divergence (MACD) oscillator has narrowed and looks like it is close to a cover-shorts buy signal.

In this weekly Japanese Candlestick chart of AMZN, below, we can see that prices are below the cresting 40-week moving average line. The weekly candle bars show lower shadows below $1,500, which indicates that prices were being rejected. The weekly OBV line show only a modest decline the past three months and the MACD oscillator is bearish but still above the zero line.

In this Point and Figure chart we can see that prices are in a downtrend. A rally to $1564 will be a positive. There is a downside price target of $1,300 being projected, but the volume-at-price scale on the left side of the chart shows what should be good support below the market. 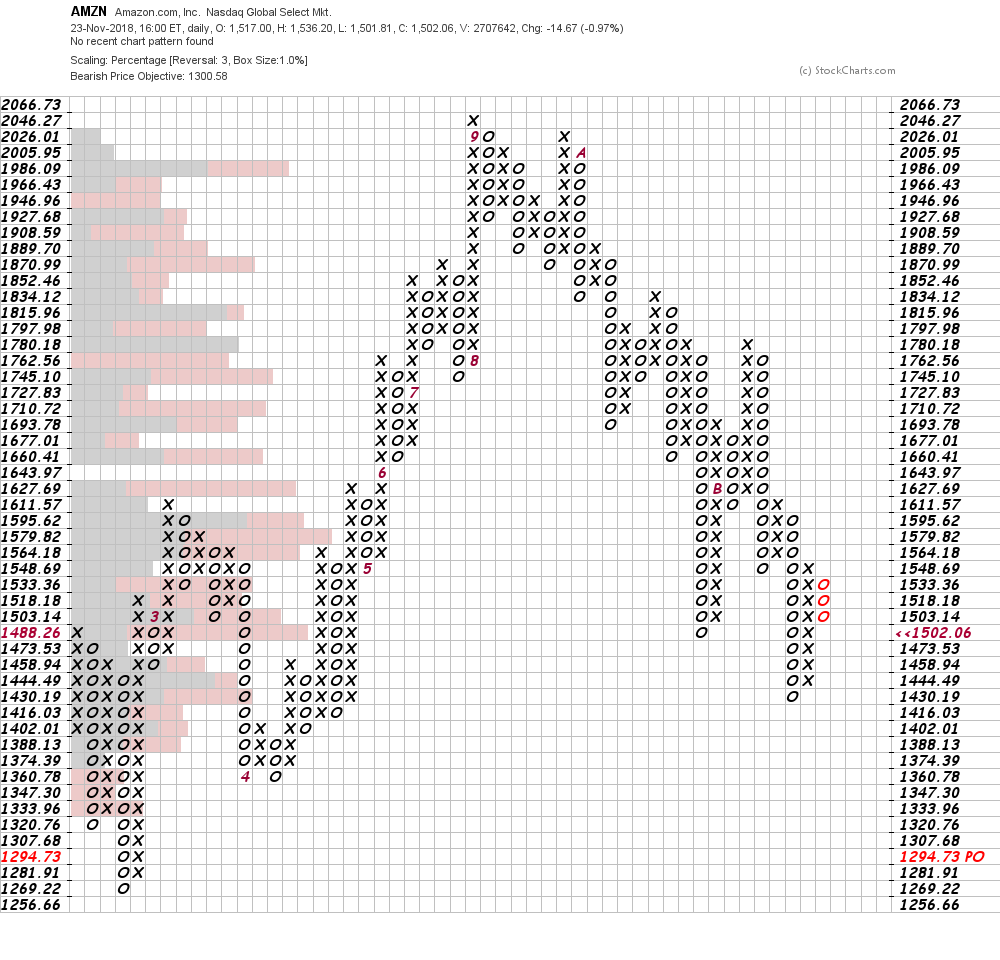 Bottom line strategy: Yes, the price of AMZN could go lower, but the broad market is now poised for a year-end rally ( see my story on the S&P 500) and I would anticipate that AMZN participates. Prices may not go onto new all-time highs, but we could see a retest of $1,800 to $1,900 area in the weeks ahead.
Get an email alert each time I write an article for Real Money. Click the "+Follow" next to my byline to this article.
TAGS: Investing | Technical Analysis | Consumer | Retail | Television Production/Distribution | E-Commerce | Stock of the Day