With a nod toward Maurice Sendak, little Max asked... "Holy Moly, what was that?"

That was Amazon (AMZN) , little Max, they just reported fourth-quarter financial results. With that, little Max went back to bed, back to the land of the Wild Things.

This was one that your old pal got right. Amazon remains a Sarge fave. That said, I sold half of my long position after hours on Thursday night... after doubling my core position's size on weakness Thursday afternoon. The trading was done in self-defense, but it did have some foundation. I hoped for, but did not expect a stock split.

I knew, in my heart, that Amazon would have to raise prices for Prime membership subscriptions. Outside of AWS, and advertising, the recurring revenue of a broad subscription service is the best weapon a firm clearly in "spend to invest" mode has. The fact that my thesis -- which I expressed on television Thursday afternoon -- worked? That was a relief, given that my stance was public.

On Thursday afternoon, Amazon posted fourth-quarter GAAP EPS of $27.75. Wall Street's expectations were for a rough $3.54, but is not comparable. Amazon included a pre-tax gain of $11.8B in non-operating income from the firm's investment in Rivian Automotive (RIVN) . Had Amazon stripped out this pre-tax gain and other one-time items, and reported an adjusted EPS, Refinitiv places that result at a supposed $580, which still crushed Wall Street.

The firm did not do as well on the top line. Amazon generated revenue of $137.4B over the three month period, which was good for growth of 9.4% annually, but did fall short of consensus view which was for roughly $138B.

I will start with cash flows, because that's where Amazon started in their press release.

Operating cash flow for the full year landed at $46.3B, which compares to $66.1B for FY 2020. Free cash flow swung to an outflow of $9.1B for the full year from an inflow of $31B for FY 2020. Wall Street had been looking for operating cash flow above $60B, and free cash flow of more than $+10B, so these numbers are indeed disappointing. Free cash flow less principal repayments of financial leases and obligations decreased to an outflow of $20.4B. For the quarter, operating income decreased to $3.46B, down from $6.9B for the year ago period. However, this number was nearly a cool $1B better than estimates.

You'll notice in the above paragraph that I mention that operating income for the entire firm as $3.46B. Well look at these three segments and do the math. That's how key AWS is to this firm's profitability and its ability to keep investing in expanding not just in cloud computing capabilities, but in safety and logistics for employees and customers alike across the rest of its businesses. Both the North American and International businesses swung to operating losses solely due to rising expenses. AWS, this quarter accounted for 13% of Amazon's net sales, but 153% of Amazon's operating income.

Note 1: This is the first quarter that Advertising Services were broken out from Other.

Are you going to cancel your membership? Me neither. Having a subscription to Prime has become almost an unquantifiable life hack, in my opinion. Amazon is counting on that.

Assuming little to no churn in membership, these price hikes alone can add up to $3B to the firm's top line annually. This is also the highest quality revenue... recurring revenue.

I can find 18 five-star rated (by TipRanks) sell-side analysts that have opined on Amazon since these results were released last night. All 18 have "buy" ratings or their firm's buy equivalent rating on the stock. The average target price of the 18 is $4,212.44, with a high target of $5,000 (Shyam Patil at Susquehanna), and a low target of $3,600 (Daniel Salmon at BMO Capital). 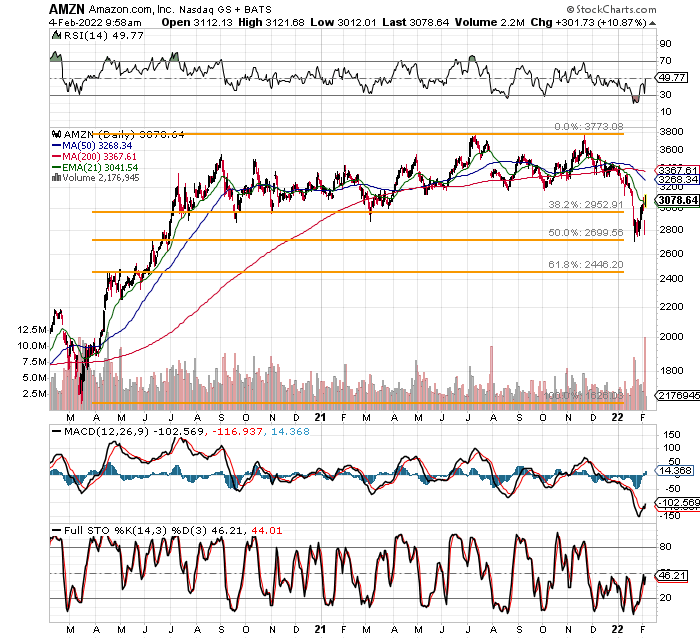 Readers can see, and investors well know that Amazon pretty much remained in a trading range (mega-basing pattern) from July 2020 through early January 2022. The January plummet broke the range to the downside, but support was indeed found in late January (and again yesterday - sort of) at a 50% retracement of the March 2020 through July 2021 rally.

Despite this morning's action, the daily MACD and Full Stochastic Oscillator both still look rather weak. The Relative Strength Index has reached a neutral reading. (Can you imagine if these guys ever decide to split the stock? Is it an ego thing?)

The shares have retaken their 21-day EMA on Friday, but remain a long way from retaking either the 50-day SMA or the 200 day SMA. Those are the big two for portfolio managers. You can see above that Wall Street is still behind this name. Taking that a step further, as of year's end, 6,491 funds were invested in AMZN, up 70 funds from the end of Q3 2021. Only 33 funds had taken the lunge over the three months prior. Hence there is evidence that Wall Street wants to be here. We will have to see how many funds jumped ship after New Year's given the volatility, but I won't have that information until early April.

Like I said above, I traded this earnings release, and yes, this one was a home run. More importantly, I remain invested. Being that we do not have an identifiable pattern or at least we don't have one that I can easily identify as anything that has worked for me before, I am being cautious.

Where will I panic? I suppose I don't unless we approach a retest of the lows of 2022. That would be an awful sign.

I will of course, update these levels should a recognizable technical pattern develop.

Get an email alert each time I write an article for Real Money. Click the "+Follow" next to my byline to this article.
TAGS: Earnings | Economy | Investing | Markets | Stocks | Technical Analysis | Trading | Technology | E-Commerce | Consumer Products