Any impact from today's Cyber Monday numbers will be a short-term event for Amazon (AMZN) .

Any impact from today's Cyber Monday numbers will be a short-term event for Amazon.

Given how late Thanksgiving fell this year, it feels as though we've had Black Friday and online deals for a full month leading up to Cyber Monday. After $11.6 billion in online sales on Thursday and Friday of last week, today's total will fall short of that but should come in close to double digits, $10 billion give or take $500 million.

The biggest irony I've seen thus far is a headline that alluded to Walmart (WMT) and Target (TGT) threatening Amazon's online sales. It wasn't that long ago when headlines discussed Amazon threatening Walmart and Target. The hunter has become the hunted.

Still, there's plenty of room and plenty of dollars for all three. The retail race has become Amazon, Walmart, Target, a handful of niche players, 50 feet of crap, then department stores. This was one of the first years I got out to the stores and the mall on Thursday, Friday, and Saturday. While I managed to capture some epic pictures of goofy around with my kids, the overall takeaway was underwhelming. The mall was crowded, but very few people carried bags. I will say the traffic in American Eagle Outfitters (AEO) surprised me a bit, but the lines in Apple (AAPL) did not.

None of our friends from Friendsgiving were hitting the stores. They all had the same response: haven't you heard of this online shopping thing?

Remember, Amazon already guided revenues lower for Q4. Estimates sat at $87.37 billion, but management lowered them to a range of $80-$86.5 billion. So even if Cyber Monday comes in around $9 billion, after the strong Thanksgiving and Black Friday online sales action, I'd say this core 5-day period won't be a drag on Amazon's quarter. In fact, I'd figure the early overall results are strong enough to feel better about the quarterly revenue guidance from Amazon. Where the bottom line numbers falls would be a slightly bigger worry amid the stronger competition from Walmart and Target. 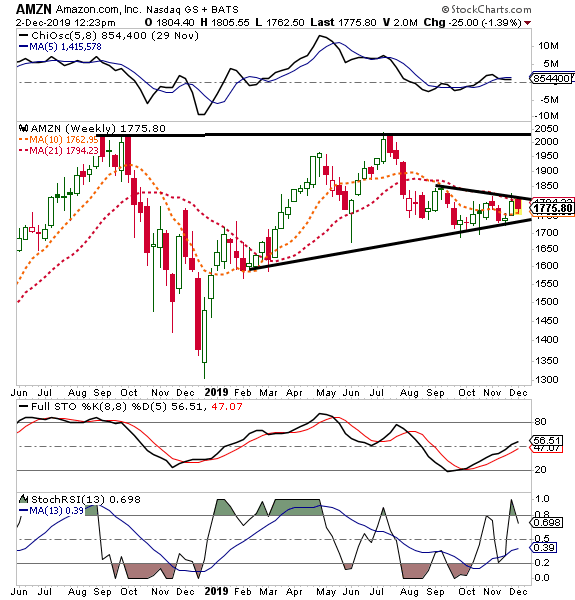 In terms of price, I have my eyes on $1740 as support and $1800 as resistance. While the stock trades in between those numbers based on a weekly closing price, I don't have an inkling to go long or short. If I already held a position, I would continue to hold, but there's no trigger here to begin a new position. Moving averages, volume, moment, and trend indicators are conflicting. Full Stochastics is trending bullish, StochRSI is reversing from overbought (usually bearish), volume is muddled, and the moving averages are split. Again, all taken together they point towards sitting on your hands until price makes a move.

I wouldn't read much into today's action or Tuesday's response to Monday's final cyber tallies. Instead, let price be your guide at the end of the week.

(Amazon and Apple are holdings in Jim Cramer's Action Alerts PLUS member club. Want to be alerted before Jim Cramer buys or sells AMZN or AAPL? Learn more now.)

You've Got Volatility 'Covered' With This Strategy

This simple option strategy, which I continue to use with small-cap biotechs, is one of the easiest and cheapest risk mitigation approaches an individual can take.

Mattel Is Doing Swell, So Add to It on Fresh Highs

It appears buyers of the toymaker's stock have been more aggressive of late based on its charts.

The market was surprised by aggressive tax proposals that whacked a small-cap recovery just as it started to build.