This goes for Amazon customers in Austria, Australia, Belgium, Brazil, Canada, China, France, Germany, Italy, Japan, Luxembourg, Mexico, the Netherlands, Poland, Portugal, Singapore, Spain, Sweden, the UK, and the US. Poland and Sweden are new to the list this year. Amazon customers residing in Egypt, India, Saudi Arabia, and the UAE will have a separate discount event on a different date.

As the event approaches, early deals are expected to start by June 21st (first day of summer) that will include 55% off sales on Amazon electronic devices and up to 50% off on Fire TV.

Time To Get Back Into The Stock?

Prime Day is a big deal from a retail perspective, and the firm will see a surge in sales, though margin will be squeezed. There is still the persistent, resilient success of AWS. Morgan Stanley reminded us of that this week. The stock split has made the stock more affordable for retail investors. They are yet to arrive.

Amazon does not report second quarter earnings until late July. At the moment, Wall Street looks for EPS of $0.17 within a range spanning from $-0.03 to $0.47, on revenue of slightly less than $120B. The range for revenue generations stretches from $116B to $121.5B. Should Amazon meet current consensus on these metrics, the comparison would be against EPS of $0.76 on revenue of $113.1B for Q2 2021.

That would be a second consecutive quarter of extreme earnings contraction on revenue growth of about 6%. Obviously nothing to write home about, other than the sheer size of the numbers we are talking about. As a refresher, on April 28th, Amazon reported an EPS loss of $7.56 per share on revenue of $116.44B (+7.3% y/y).

The numbers behind the numbers for the first quarter were indeed as awful as were the headlines. Free cash flow ran negative to the tune of $-1.74 per share. What I bet most Amazon shareholders might not realize is that free cash flow has run negative in four of the past five quarters and ran negative for the trailing 12 months as of the period ended March 31st. Operating income for Q1 dropped to $3.7B from $8.9B one year earlier, while net income/loss amounted to $-3.8B compared to $+8.1B 12 months earlier.

Oh, AWS still grew 37% year over year, and the customer business 23%... but the pandemic and the war in Europe has taken their toll. The firm had doubled the size of its fulfillment network over two years, and had beefed up payroll to the point where capacity is no longer an issue. CEO Andy Jassy told us at the time that right sizing the firm in the face of inflationary pressures and supply chain problems could take some time. I expect he told the truth.

Amazon ended the first quarter with a net cash position of $66.385B, down about $30B from three months earlier and the lowest end of quarter net cash position for the firm in two years. Current assets dropped to $133.876B (from $161.6B) as inventories increased to $34.987B. Current liabilities dropped, but not nearly as much as current assets... to $139.508B. This includes $10B in new short-term borrowings.

This leaves Amazon with a current ratio of 0.96. We would call out any other firm with a current ratio of less than one. Do we not mention that with Amazon because it is Amazon? Omit the entry for inventories and Amazon runs with a quick ratio of 0.71. Yes, Amazon is a retailer and we have to be lenient with retailers for having to stock up on inventories, but Amazon is much more than that.

Total assets add up to $410.767B, including $20.229B in "goodwill", which I do not consider to be abusive. Total liabilities less equity amounts to $276.766B including $54.356B in long-term debt and $65.731B in long-term leases. Yes, the net cash position is large enough to cover both long-term debt and short-term borrowings, so there is no problem here. Tangible book of $11.19 per share is nothing to sneeze at.... but I do not love this balance sheet. The firm has to return to profitability and positive cash flow in order to make me more comfortable. 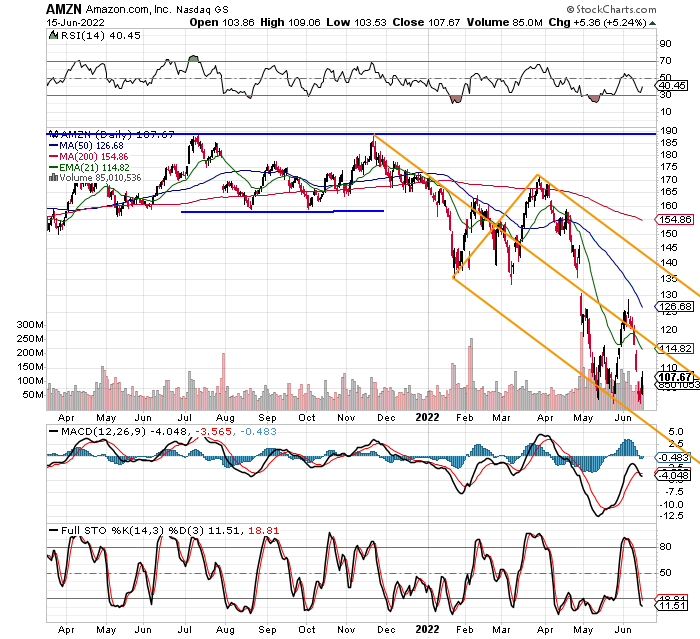 We all know that Amazon is sitting on a ton of dough, but that a ton of dough is already spoken for as well. I would never call Amazon weak, but the fundamentals are not what they were a few months back. The chart shows the stock break down and out of a basing pattern that had held (adjusted for split) in between $158 and $188. In mid-November, the stock peaked for the last time.

A Pitchfork model applied to this now seven month long sell-off shows the stock reaching toward the lower trend line, while testing $101 support for a third time. You know what happens when you knock on a door three times, right? Either they tell you to "scram" or they open the door.

I see the 21 day EMA of $115, which is currently running with the Pitchfork's central trendline as a pivot for now. I don't think I would buy any shares right here ($107-ish). I would rather grab something either on momentum upon taking that level, or get paid to nab a few shares at $101 (or less on a net basis) to start. Last night, the $95 August puts were paying almost $4. They'll likely pay more than that on Thursday. The August $90 puts were paying almost $2.75. Now, that sounds interesting.

(Amazon is a holding in the Action Alerts PLUS member club. Want to be alerted before AMZN buys or sells AAPL? Learn more now.)

Get an email alert each time I write an article for Real Money. Click the "+Follow" next to my byline to this article.
TAGS: Earnings | Economy | Investing | Stocks | Technical Analysis | Trading | Retail | E-Commerce