We've all been expecting Amazon (AMZN) to rule the world one of these days. The stock is certainly not an easy one to own, or to short for that matter. Readers know that I exited my long-term position back in September. That was a good out at the time. Still is. Amazon, remains the great disruptor... off basically all industries, not just retail.

Yet, as the firm moves to compete with Walmart (WMT) and Kroger (KR) for the national grocery business, the firm spends money. As the firm moves to compete with United Parcel Service (UPS) and FedEx (FDX) in delivery services perhaps beyond it's own needs, the firm spends money. As the firm develops it's own custom processors, the firm may save money, but must spend money to get there, forcing at first reduced reliance upon Intel (INTC) , but then perhaps competition with the very same Intel, not to mention Advanced Micro Devices (AMD) . That brings us to the cloud, where Amazon's AWS had built a sizable lead across the business to business space. A lead that has drawn intense competition from the now quite formidable Microsoft (MSFT) Azure, as well as Alphabet's (GOOGL) difficult to gauge progress made in the Google Cloud.

Yes, Amazon is everywhere, and omnipresent. Yet, perhaps it is that omnipresence that forces the hand of this capital expenditure. Huh? Listen here... as Amazon forces disinflation, or even deflation into various corners of the corporate economy, the firm must... is absolutely forced to protect the spots where either robust growth or high margin is quantifiable.

Let's not forget that Amazon will run the AWS re:Invent 2019 cloud computing conference all week this week from Las Vegas, Nevada. One might think they might experience some kind of benefit as there will be several executive addresses labeled as "keynotes" throughout.

AWS cloud computing is all about margin for Amazon. Operating margin for that segment printed at 25.1% in Q3 2019, down from 31% the year prior. Management noted at the time that 2018 numbers were resultant of increased spending in 2017, and that the firm is spending similarly on that business yet again. The difference in my viewpoint, is that the firm's lead has shrunk, and that this spending is now in self defense. Microsoft and Alphabet - not to mention Oracle (ORCL)  and International Business Machines (IBM) - are going nowhere. Any future boost in margin will be hard fought from here, and come at someone else's expense.

Then there is the advertising business. Given that the firm is the dominant player in consumer based e-commerce, and that this is not a high margin business, the firm must make every effort to protect the attraction of the U.S. consumer to the retail site as that is a key cog in what is rapidly growing advertising sales. Amazon lumps advertising dollars under the label "Other Revenue", and "Other Revenue" grew 45% year over year in the recent quarter, up from 37% a year earlier. Right now, it seems a cinch that Amazon continues to lead this growing slice of domestic retail, yet not a soul can deny the aggression with which both Walmart and Target (TGT) are pursuing market share, and they both seem willing to subsidize segment specific losses to get there. 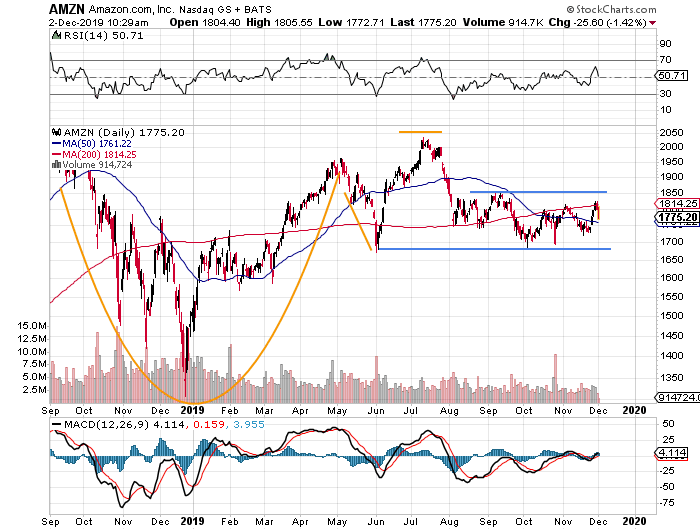 Going back, it becomes easy to see in hindsight that the real warning for this name was the failed breakout of the 2018-2019 cup with handle pattern. (That's in percentage terms. The failed breakout still returned $70 per share from pivot to failure.)

Since the summer 2019 beat down, the shares have settled into a trading range spanning from the $1665 level to just above $1850. This has made the name a fairly solid vehicle for day/week trading, but only in small to moderate sized lots. At least for me. More alarmingly, I think... the shares have hit resistance rather sharply on every attempt made to retake the 200 day SMA since mid-October. That line had been summer support.

I think this name could provide a good very short-term trade from the long side... this week. For a long term buyer, I would rather try to grab some on momentum above the 200 day line than more cheaply just below that line.

Remember this. The name trades technically. The algorithms that trade this name are programmed by kids like us who are hired by these trading firms to interpret charts. Is it really that simple? Heck, nothing is absolute, but yeah a lot of the time it is.

Thoughts That Have Nothing To Do With Amazon

Just a heads up. Roku (ROKU) is fast approaching that stock's 50 day SMA at $132. That's probably where I start to reenter. Just sayin'. A big hug out to Morgan Stanley for the downgrade.

Get an email alert each time I write an article for Real Money. Click the "+Follow" next to my byline to this article.
TAGS: Investing | Markets | Stocks | Technical Analysis | Trading | Retail | E-Commerce | Jeff Bezos | Stock of the Day