If it seems that maybe I bring up the stock of Amazon (AMZN) often enough, it's because I do. I really do, and it's on purpose. Not only is this name arguably the most common name mentioned in my Market Recon column at Real Money, I mentioned the shares on three separate television appearances last week when asked what names I like best in this environment, or if economic growth should stall, or what might still do well regardless of the electoral outcome. Amazon was one of my answers. Did not matter what eventuality I looked at. Does it mean that the shares will never come in again? Of course not. Actually, they are due for a bit of a fall. That said, the firm is at the middle of everything important, remains centered on effective response to consumer demand, while both disrupting and remaining indispensable to corporate America.

It Boils Down To E-Commerce

Right now, in this Covid world, it really does. Readers well know by now how both Amazon and Walmart (WMT) have won my loyalty throughout the crisis. Readers know that I am now starting to warm up (once again) to Costco (COST) . Why such enthusiasm over a low margin business? That's easy, low margin drives high margin. Not only does dominance in e-commerce drive high margin Prime membership, this dominance also drives the lucrative advertising business. Why do you think Walmart is trying to crack that code. Even as we move into a new era of reduced corporate budgets that will impact marketing, holding down the lion's share (and it's not close) of this business does provide something of a mote.

Oh, and concerning the low-margin e-commerce business, this is exactly what the $1.3 billion acquisition of Zoox announced in late June is all about. That is eventually reducing the expense of last mile delivery. Then there's the rest of the Amazon story that includes not just market share leadership in the corporate cloud with AWS, but services such as music and video, hardware such as Alexa, Fire, and Kindle, and brick and mortar groceries such as Whole Foods. Today though, we are discussing e-commerce, so let's go back there.

On Friday morning, Citi analyst Jason Bazinet maintained his "buy" rating on Amazon, while increasing his target price from $2700 to $3550, which happens to be the most aggressive target price for this name on Wall Street. Bazinet sees retail sales in the U.S. recovering to the point where sales are up 1% in 2022 from 2019. Bazinet gets there by factoring in 43% growth in e-commerce as well as a 4% decline in brick and mortar retail.

Bazinet also notes consistently increasing market-share gains made by Amazon within those isolated e-commerce sales. He sees Amazon's share moving from 38% of all e-commerce and 4% of total U.S. sales to 43% and 7%, respectively, by 2022. He then uses these figures to apply a 25 times multiple to his projection for 2022 EBITDA. Bazinet also sees Amazon reducing expenses and eventually taking market-share in the parcel delivery business. 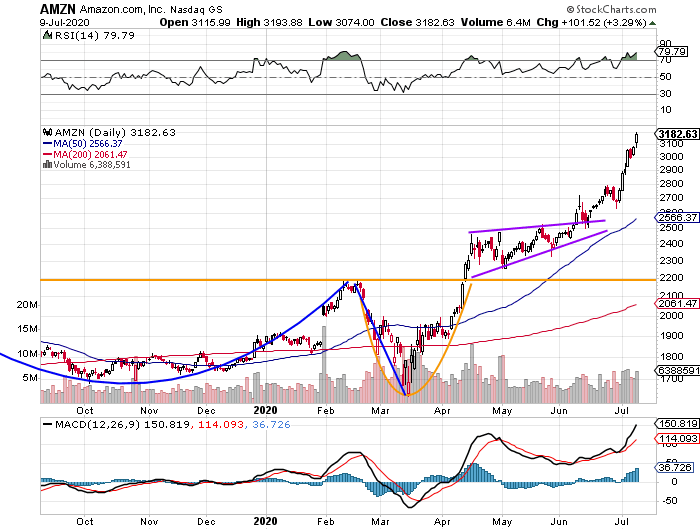 Yes, the shares have gone semi-parabolic since late June. Three weeks ago I gave readers a price target of $2970, which was about $320 dollars north of the last sale at that time. The stock easily made short work of my target. Clearly overbought? Yes. Does that mean it comes in? Yes. When? I don't know. I do expect that when managers and insiders decide to turn on the mega-caps that the shares could test that target from the upside. At that point, I think Amazon is a buy.

Right now, I am hanging on until that worm turns. Is Bazinet correct? He might me. He might even be a little low. I do think Amazon trades at $4000, maybe even this year. I also think maybe we will get to buy some at 2800 before then. Will we when we can? Tough question. I will. I will also expect to add to Microsoft (MSFT) on that day.

(Amazon, Costco and Microsoft are holdings in Jim Cramer's Action Alerts PLUS member club. Want to be alerted before Jim Cramer buys or sells these stocks? Learn more now.)

Get an email alert each time I write an article for Real Money. Click the "+Follow" next to my byline to this article.
TAGS: Economy | Investing | Markets | Stocks | Trading | Retail | Technology | E-Commerce