Leviathan. One definition of the word is a mythical sea-monster mentioned in several books of the Tanakh (Hebrew Bible). Not that definition. According to Merriam-Webster, the word leviathan can also mean something of "enormous size"... yeah, that leviathan. That's the ticket. I just wrote to you maybe 24 hours ago to tell you what a great quarter Apple (AAPL) had experienced for this past reporting period. Uhm... hold that thought. Or, in modern day parlance... "hold my beer."

Amazon (AMZN) reported the firm's first quarter performance on Thursday evening. I imagine that you have seen the numbers by now, but just in case the NFL draft was all you could think about last night, you should probably sit down. Amazon posted GAAP (the real kind) EPS of $15.79, trouncing consensus by more than six bucks and the very top of consensus range by more than $3. This was good for year over year earnings growth of 215%, the fourth consecutive quarter for the firm of earnings growth of 97% or more. Revenue generation increased 43.7% to $108.52 billion, beating the street by almost $4 billion. Operating Income of $8.9 billion beat expectations by 47.6%. These are, as my young adult children might say... "video game numbers."

Online Stores - This is the e-commerce business that saved us all throughout the pandemic. Net sales of $52.9 billion beat expectations and was good for growth of 41%. This is the heart of Amazon and the actual driver for growth in both advertising revenue as well as Prime membership. Those numbers come up elsewhere. One negative here, and under the circumstances, I consider this acceptable. Worldwide shipping costs increased 57% to $171.2 billion.

Third Party Seller Services - This is where all things related to third parties using Amazon's storefront are recorded to include commission and fulfilment fees, so this could technically be included in Online Stores, but Amazon breaks it out, and independent, this is still Amazon's second largest business. This segment posted sales of $23.7 billion, which was up 64% year over year, and also bested estimates.

Amazon Web Services - This is the unit that most folks who watch Amazon closely watch the closest. Would rising sales on increasing margin make you happy? AWS put a revenue print of $13.5 billion to the tape (+32%), improving on the 28% growth posted for Q4 2020. Order backlog increased from $50 billion to $52.9 billion. Operating margin improved to 30.8% sequentially from 28%.

Subscription Services - This is where the already mentioned annual memberships to Prime show up, not to mention video, music (which is a great product by the way), and other offerings also exist. The contribution in sales here amounts to $7.6 billion, beating projections and good for 34% growth. Amazon indicates that more focus will be placed upon Amazon Prime Video moving forward in an effort to compete better with the likes of Netflix (NFLX) , Walt Disney (DIS) and others, as the firm has noticed a high conversion rate from trial memberships to paying customers.

Other - This is probably the second most closely watched business segment within the firm as advertising dollars are not broken out by themselves but are recorded here. "Other" sales came to a cool $6.9 billion, up 72% over last year, and easily beating expectations.

Physical Stores - This is mostly Whole Foods, which also helped my family get through the worst of the pandemic, basically because they delivered back when most grocery stores would not. Physical Stores are the only segment in outright contraction as you may have expected. Revenue here printed at $3.9 billion, -16%, and below the street's estimates.

Amazon expects to have a very solid second (current) quarter. Net sales are expected to land in a range spanning from $110 billion to $116 billion (growth of 24% to 30%). This guidance anticipates a favorable 200 basis point impact from currency exchange rates as well as assume that Prime Day 2021 comes off as planned later in the quarter. Amazon sees operating income of at least $4.5 billion, but not more than $8 billion. Guidance also includes an expected $1.5 billion in expenses related to safely operating around COVID-19.

I have rarely if ever seen a large company crush expectations so decisively. I urge investors not quite so impressed with guidance that Amazon is historically conservative when officially communicating outlook. I think the only possible disappointment that investors and traders might pull from this report... and I mentioned this on Thursday on the Claman Countdown on the Fox Business Network yesterday... would be that the euphoria around a potential blowout quarter might abate if there was no mention of a stock split.

We have already seen the shares, though up nicely from Thursday's close, come way, way off of the overnight highs. This is a big win for me personally, despite that much of my risk taking was built around the stock split narrative. What provoked my risk taking was incorrect, at least for now, but I will take the money and run. Thank you. I have an equity long to reduce back to core, and I have a $3470/$3500 bull call spread (that I paid an average of $13 for) that I need to unwind intelligently so as to try to squeeze the max profit out of it. 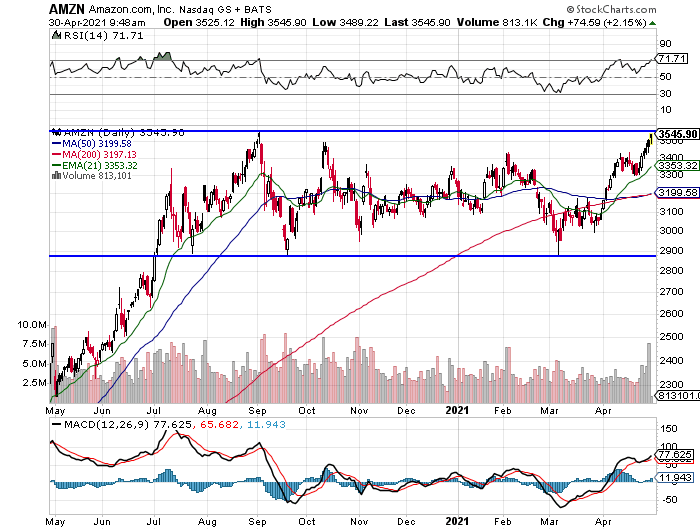 How long can a basing pattern last? Apparently a very long time. Even now, Amazon so far has failed to break out beyond our established pivot. I see no reason to change the plan that we have discussed in the past.

(Apple, Amazon and Disney are holdings in Jim Cramer's Action Alerts PLUS member club. Want to be alerted before Jim Cramer buys or sells these stocks? Learn more now.)

Get an email alert each time I write an article for Real Money. Click the "+Follow" next to my byline to this article.
TAGS: Earnings | Investing | Markets | Stocks | Technical Analysis | Trading | E-Commerce | Jeff Bezos

I think holiday shoppers are going to return with vengeance this year.