We looked at the charts and indicators of Amazon.com (AMZN) back on October 28, and wrote that "Millions of people will continue to shop on Amazon but the charts of e-commerce behemoth have weakened and the risk of a decline has risen. Raise your stop protection."

Here we are four and a half months later and the charts still look risky. Let's check.

In this updated daily bar chart of AMZN, below, we can see that prices have traded sideways since the end of October but a fresh decline started at the beginning of February of this year. AMZN is now below the declining 50-day moving average line and it has been trading below the still rising 200-day moving average line.
The price action this week looks like a rally failure around the underside of the 200-day line. This is the opposite of traders buying a dip to the 200-day line.
The On-Balance-Volume (OBV) line has been drifting lower since early February telling us that sellers of AMZN are more aggressive. This means that the trading volume has been heavier on days when AMZN has closed lower.
The Moving Average Convergence Divergence (MACD) oscillator fell below the zero line in late February for an outright sell signal. The MACD oscillator looks close to a cover shorts buy signal but it will probably take a rally back above the 200-day line.

In this weekly Japanese candlestick chart of AMZN, below, we see a mostly bearish picture. Prices closed below the 40-week moving average line last week (red candle). This week the bounce (white candle) has so far stopped at the underside of the moving average line.
The OBV line has been in a decline from early October which signals months of aggressive selling. The MACD oscillator has been pointed down since September and is getting close to the zero line.

In this daily Point and Figure chart of AMZN, below, we can see that a trade at $2850 will be a new low for the move down on this chart. This could precipitate further weakness. The software suggests $2351 as a potential downside price target. 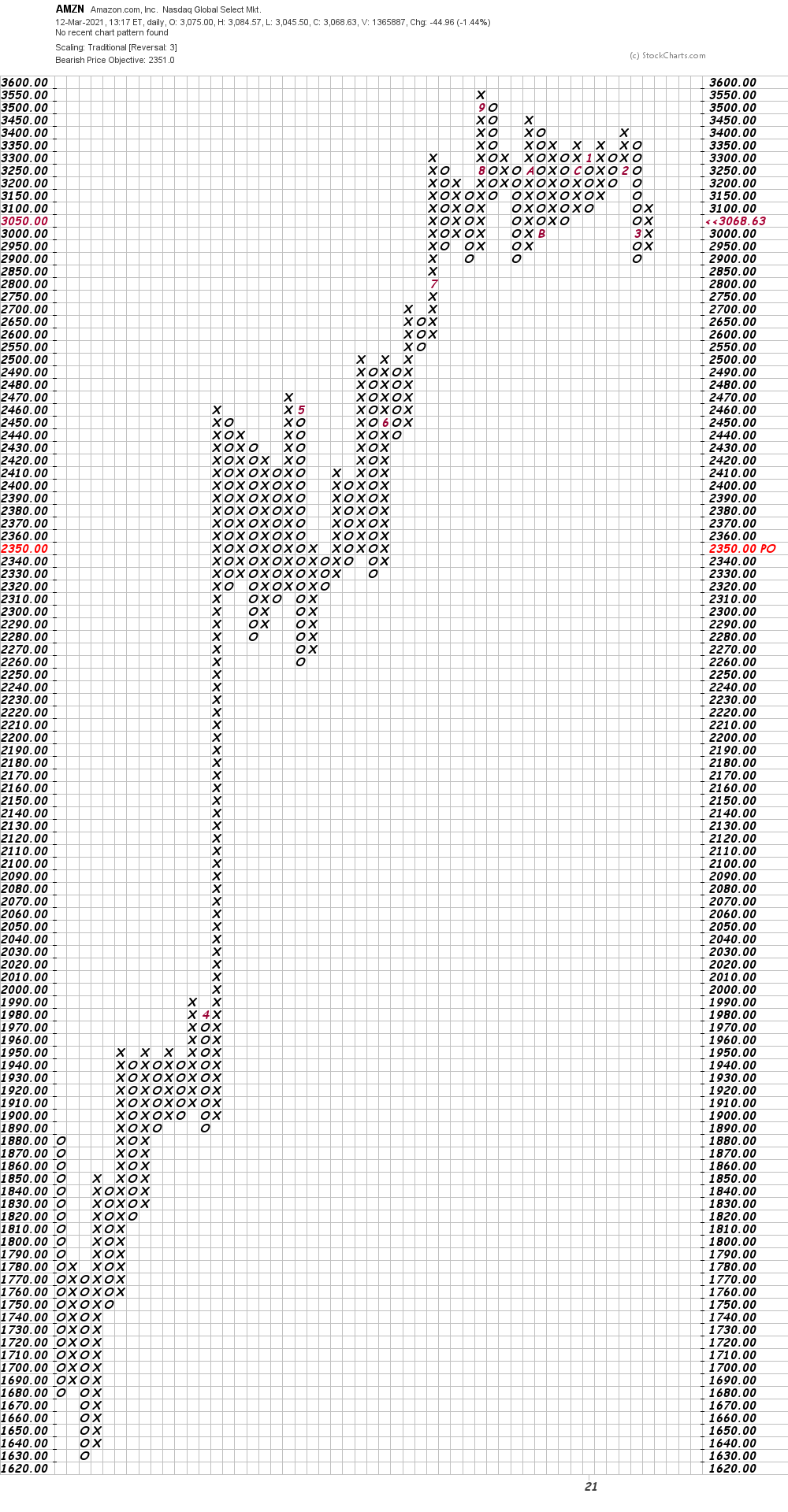 Bottom line strategy: AMZN is so ingrained in our daily life how could it possibly decline? AMZN has already spent eight days below the 200-day line. Another week below this key long-term indicator may be the breaking point. A trade at $2850 will weaken the Point and Figure chart.

Get an email alert each time I write an article for Real Money. Click the "+Follow" next to my byline to this article.
TAGS: Investing | Markets | Stocks | Technical Analysis | Trading | Retail | E-Commerce | Jeff Bezos