Is it possible to be impressed with an earnings release that misses by a mile on both the top and bottom lines? With a revenue print that hits the tape down 52.5%? With negative gross margin? The quarter reported was just plain awful for TJX Companies (TJX) , the parent of the TJ Maxx, Marshalls, MarMaxx, and Home Goods brand names. Just plains awful, I think, but when one takes a deeper, more detailed look into what management has done to finesse this terrible situation, there is cause to come away impressed with the effort, the creativity, and yes... the plain old ingenuity. Let's dig in.

Do we need to go there? We just told you that revenue was more than halved. Earnings printed deeply negative, badly missing expectations that already came with a minus sign. Not only was TJX forced to shut down its primarily brick and mortar locations during the height of the public health crisis, but the firm made the decision to halt on-line operations as well in order to protect employees. That in my opinion, is really quite decent.

The firm had made the decision to not pay a Q1 dividend, nor will one be paid to shareholders for the current quarter. The share repurchase program has been suspended. The firm does have something going for it. For the most part, the TJX brands are the kinds of retailers that consumers turn to when suffering from financially stressful conditions themselves. The firm's business really is purchasing merchandise in mass from retailers usually higher up on the food chain once that merchandise has gone unsold, and must be liquidated. In other words, TJX tries to buy stuff cheap and turn a profit. They're good at it.

So far, so good. The firm states a certain level of encouragement as sales have been strong in stores that have started to reopen. Management is plainly open about just how early it is, and how uncertain the future will be. The effort to get from sitting in place to reopening the stores incrementally has been Herculean. The firm had to draw down its entire $1 billion revolving credit facility. The firm has issued $4 billion in corporate debt across maturities of 5, 7, 10, and 30 years in the form of senior notes at an average weighted rate of 3.85%. The firm has cut capital expenditures to in between $400 million and $600 million from the $1.4 billion expected, all while writing down some $500 million in inventory.

On the local level, workers are required to wear masks, sanitizing programs have been put in place, fitting rooms remain closed, and there are new merchandise return policies being implemented. The firm has also been able to defer some April rent as well as what is termed as a "meaningful" portion of Q2 rent out into fiscal 2022. The firm, from the information released this morning, appears to be looking forward to what is expected to be a plentiful environment for perhaps major brand off-price purchasing opportunity. That after all has always been this firm's bread and butter. 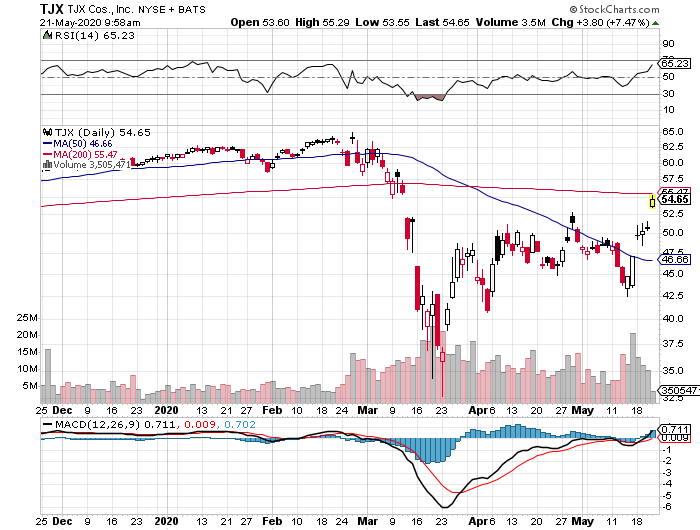 Am I going to buy these share today? Of course not. Too much uncertainty to speculate, which is what this is for now. Remove the pandemic, and in an economy weaker than it was before, this might be a solid investment. Technically, I have trouble liking a stock up almost 4% for the day, with really good looking relative strength, plus a solid looking daily MACD.... but, and this is a big but.... still trading just below the 200 day SMA of $55.47.

This spot could very possibly provide resistance upon approach. I often speak of gaps needing to be filled. This stock has now created two such gaps over just five trading sessions. My gut instinct is that at least one of these gaps will fill, and though I am impressed with what management is doing, I can not buy some until I see if that scenario actually plays out the way I think it will. Remember, there is no dividend for now, and the company is not buying these shares by your side. This likely matters at some point.

Get an email alert each time I write an article for Real Money. Click the "+Follow" next to my byline to this article.
TAGS: Earnings | Economy | Investing | Stocks | Technical Analysis | Trading | Retail | E-Commerce | Coronavirus

A Shift in Market Character Doesn't Happen All at Once

We're now in the dog days of summer, and this is typically when we have some of the lowest volume days of the year.

This Is Still One Hot Commodity

Let's look at several energy plays and see which is burning for a trade.