In his 'No-Huddle Offense' segment of Mad Money, Jim Cramer said we are stuck between a rock and a hard place. We want our economy to reopen, but we can't afford another outbreak. What needs to happen before it's safe to reopen? Cramer outlined a recipe for success.

One part of the recipe was that we need contact tracing, like that proposed by Apple (AAPL) and Alphabet (GOOGL) , which will allow people with a phone to know whether they've been close to someone who has the virus.

Let's check out the charts of GOOGL.

In this daily bar chart of GOOGL, below, we can see that prices made a strong rally from early June to February and in just a few weeks all those gains were lost. Prices have since recovered about half of the decline so this is an interesting juncture to check on the progress.

GOOGL is testing the underside of the rising 200-day moving average line and is close to a retest of the underside of the declining 50-day moving average line. The On-Balance-Volume (OBV) line made only a modest decline from February to March and that is very encouraging but the line is only slightly higher than the late March low. So far the OBV line is not showing a strong return by buyers.

The Moving Average Convergence Divergence (MACD) oscillator made a peak in January and then a lower high and bearish divergence in February. The indicator quickly sank to a sell signal and in late March signaled a cover shorts buy. Next target is the zero line and a possible buy signal.

In this weekly bar chart of GOOGL, below, we can see that the big decline of 2020 is not so bearish when viewed in relation to the action of the past three years. Prices have rebounded to retest the underside of the flat 40-week moving average line.

In this daily Point and Figure chart of GOOGL, below, we can see that a potential price target of $1504 is being projected. 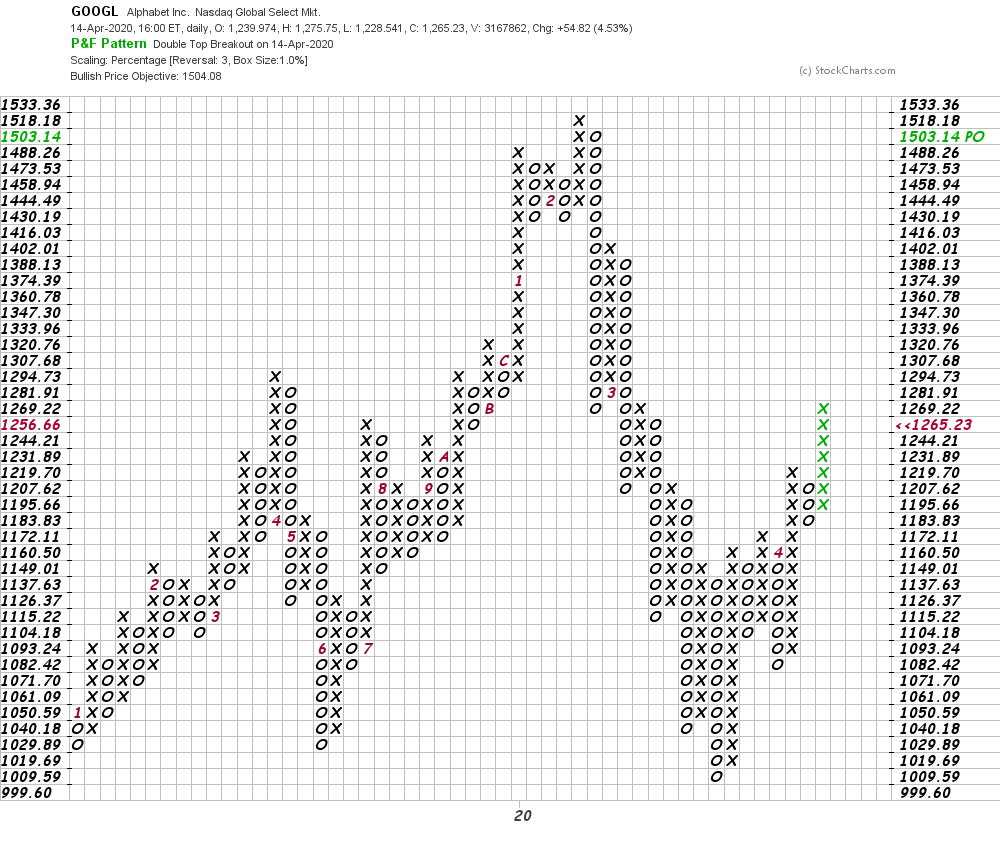 Bottom line strategy: We have good news and bad news. The good news is that GOOGL is pointed up and has retraced about half of its prior decline. The bad news is that it has retraced half of its decline. The bulls and bears are in balance at this juncture and the bulls need to prove themselves by really pushing upward from here. Recent longs might want to book some profits here.

Get an email alert each time I write an article for Real Money. Click the "+Follow" next to my byline to this article.
TAGS: Investing | Stocks | Technical Analysis | Trading | Cybersecurity | Fintech | Media | Technology | Mad Money | Coronavirus

Price action is the only thing that can be evaluated effectively on a daily basis.

Yes, you could make money up and down the market simultaneously, and here's how.