What You Want To Know

There's a lot to take in. Bottom line, you want to know if you should be in Alphabet (GOOGL) going into their Q4 earnings release after tonight's closing bell. That much I know. I have been out of the name for several months now as the firm had to get through some social, political and even regulatory hurdles. Most notably, the firm recently suffered a Eur50 million fine levied upon them by France as that nation claims that the firm's Google unit had failed to fully comply with the EU's General Data Protection Regulation, known as GDPR. That said, there is no denying that this firm is a giant across several competitive yet growing business lines. So, let's take a look.

The stock, at 12.5% off of it's 12 month high, is by some margin the top performer over that time relative to the other firms referred to by usage of the FANG acronym... Facebook (FB) , Amazon (AMZN) , and Netflix (NFLX) . Investors are going to need to hear something on the Google Cloud Platform, as this unit has continued to trail both Amazon's AWS, and Microsoft's (MSFT)  Azure in terms of servicing business cloud needs. To me, this is number one. I know that Alphabet does not like to beak out segment data, but the firm's emerging businesses now draw enough attention that investors need to hear more detail on their development. We all know that the core search-driven advertising business is top dog, but that business faces the potential for slower growth based on how far reaching the internet has become globally, not to mention the obstacle mentioned above, as well as traffic acquisition costs (TAC) that puts the squeeze on that business line's margin.

Another one of these emerging businesses that most analysts see great potential in is the Waymo autonomous vehicle unit. Up until now the unit has really just been an expense. Some expect to see that business line develop into a provider this year. We need to hear that. We also need to hear something on penetration into the hardware markets. Also, the phones, the voice assistants, and not to mention smart-home devices. Did I even mention G-mail? You-Tube? Not just performance, but how the unit plans to compete in a Netflix, Amazon, Disney (DIS) , AT&T (T) world as streaming entertainment goes to the next level. 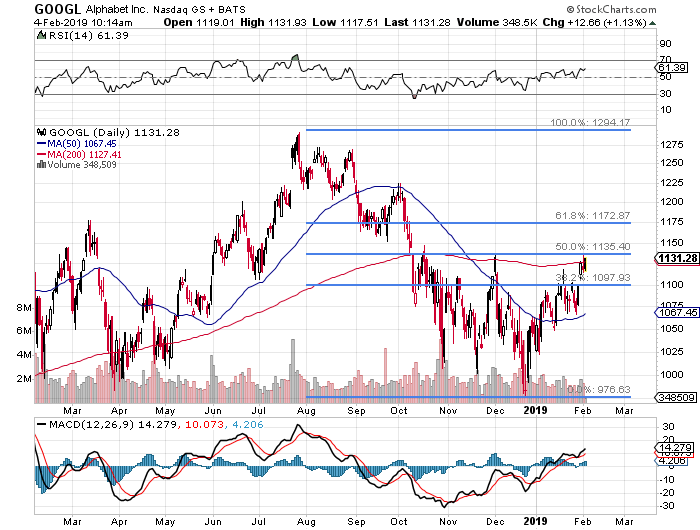 You quickly will see this name trading at a 50% retracement off the July through December move. This spot also served a triple tested resistance. The options market is pricing in a rough $27 move this evening. Visible resistance becomes likely at $1172. My thoughts: I may enter into a small long if I see some late afternoon weakness, but I am certainly not married to the idea. This is another one of those names not safe for naked selling of options on either side of the market.

For this idea, we'll go with a bull call spread. If a trader instead believed that GOOGL will puke the bed tonight, a bear put spread works in similar. Remember, the market is looking for a $27 move.

This will cost the trader $2,690.00 up front, which is a lot to lose if the stock runs the other way post-release. A lot less risky than buying 100 shares, but still a lot of dough to a normal person. What a trader can do to even reduce that risk is subsidize the purchase by making a sale of a call with a higher strike price, but the same expiration date in order to keep everything neat and tidy. If you are new, you don't need to make this complex.

Will thus make you rich? No, but it does control risk, and allows if the directional play is correct for a nice return.

Get an email alert each time I write an article for Real Money. Click the "+Follow" next to my byline to this article.
TAGS: Earnings | Investing | Markets | Options | Stocks | Technical Analysis | Trading | Software & Services | Europe | Stock of the Day