Alphabet (GOOGL) is expected to release its earnings numbers this Thursday. It's one of those companies that could be considered the elephant in the room. Similar to other tech giants it is widely followed on the fundamental side. Let's stick to the technicals to see how traders are positioned ahead of the earnings release.

In this daily bar chart of GOOGL, below, we can see the steep decline earlier this year and the dramatic recovery from the March low. Prices are up about 50% in less than four months. GOOGL is above the rising 50-day moving average line and above the rising 200-day moving average line. The dip where prices tested the 50-day line and approached the 200-day line appears in hindsight as a buying opportunity.
The On-Balance-Volume (OBV) line has risen from late March and has moved up to new highs, telling us that buyers of GOOGL have been more aggressive. The OBV line has stalled a bit this month and while it could be foreshadowing price weakness, I do not anticipate that it means we are in for a downward reaction from earnings on Thursday.
The Moving Average Convergence Divergence (MACD) oscillator has crossed to the downside for a take profits sell signal.

In this weekly bar chart of GOOGL, below, we can see a mostly bullish picture with prices at new all-time highs. GOOGL is above the rising 40-week moving average line.
The OBV line has been moving up from March but it has not (yet) made a matching new high to confirm the price gains. The weekly MACD oscillator is in a bullish configuration above the zero line.

In this Point and Figure chart of GOOGL, below, we can see a potential upside price target of $1,984. We can also see that a trade at $1,595.62 is needed for a breakout on the upside and to refresh the uptrend. 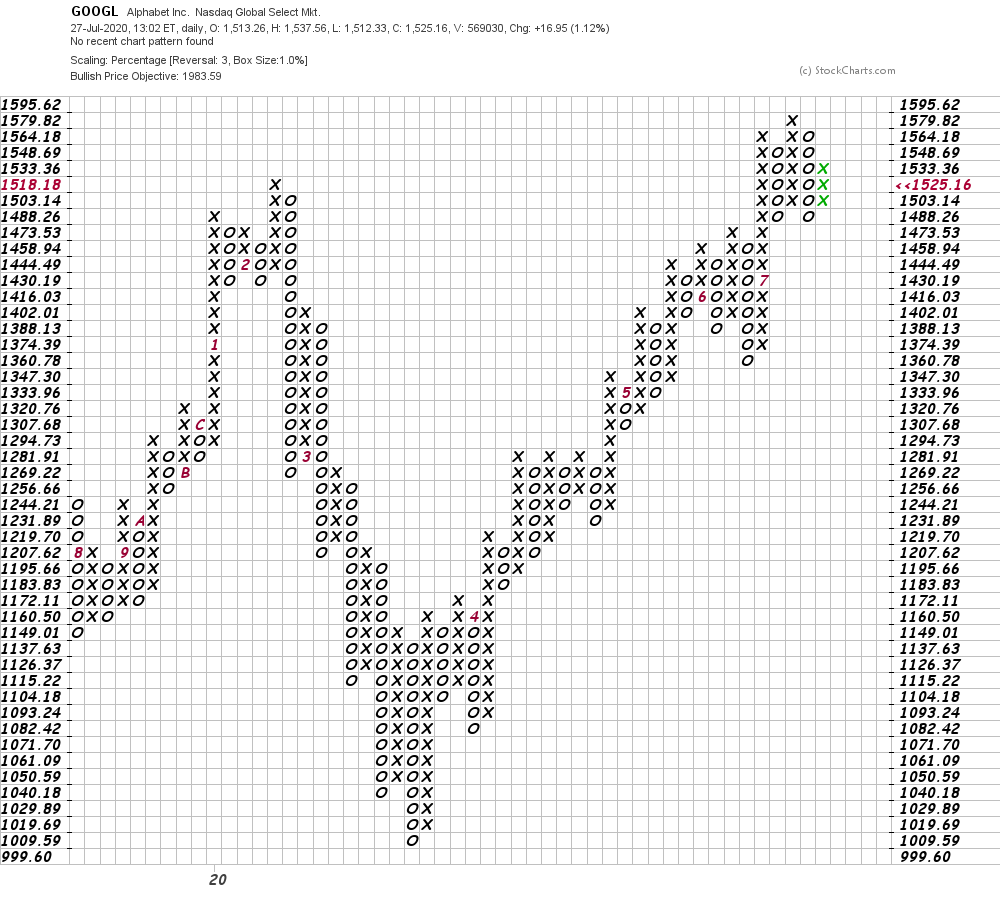 Bottom line strategy: I have no special knowledge or insight about the earnings numbers coming out this week but at this juncture in time it looks like GOOGL can trade still higher. Traders who have trouble sleeping could also reduce their position or buy ATM calls.

Get an email alert each time I write an article for Real Money. Click the "+Follow" next to my byline to this article.
TAGS: Investing | Markets | Stocks | Technical Analysis | Trading | Fintech | Technology | Advertising | E-Commerce | Earnings Preview