Alphabet (GOOGL) is the 'Stock of the Day' at Real Money Wednesday. The company confirmed that there was a federal inquiry into its deal with Ascension and a project called Nightingale where Google was supposedly accessing and analyzing Ascension patient data without patient or doctor knowledge. St. Louis- based Ascension is the largest Catholic health system in the world and the largest non-profit health system in the United States.

Let's check out the charts and indicators of GOOGL to see who may be voting with their feet.

In this daily bar chart of GOOGL, below, we can see that prices broke out to new highs this month besting the April zenith. GOOGL is trading above the rising 50-day and 200-day moving average lines. The trading volume looks like it increased in late October as prices broke out to new highs. Chart watchers like to see volume increase when prices break out.
The daily On-Balance-Volume (OBV) line shows a rise from early October indicating that buyers were being more aggressive. The OBV line is not far from making a new high to confirm the new price highs.
The 12-day price momentum study in the lower panel shows some slight weakness from October to November and this is a small bearish divergence when compared to prices making higher highs. This divergence is not likely to have an impact on the current uptrend.

In this weekly bar chart of GOOGL, below, we can see that prices have broken above the highs of 2018 and 2019. Prices are above the rising 40-week moving average line.
The weekly OBV line shows improvement in October but the bigger picture is not that robust.
The weekly Moving Average Convergence Divergence (MACD) oscillator is in a clear bullish configuration above the zero line. 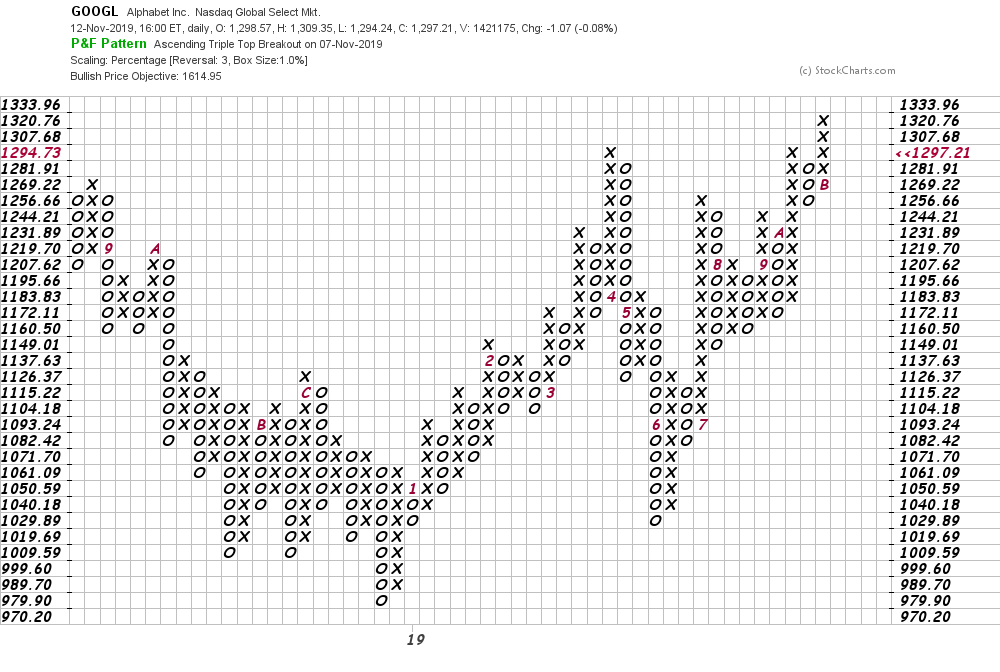 Bottom line strategy: I have no knowledge or insight of how serious this inquiry is or whether it will impact earnings, but at this juncture in time the charts and indicators are still bullish. A close below $1,250 would weaken the picture and that is the stop loss I would suggest.

Get an email alert each time I write an article for Real Money. Click the "+Follow" next to my byline to this article.
TAGS: Investing | Stocks | Technical Analysis | Trading | Cybersecurity | Financial Services | Fintech | Software & Services | E-Commerce | Stock of the Day