Monday's candle pattern looks like a potential hammer - a bottom reversal pattern. The lower shadow is at least two to three times the size of the real body. Today's candle pattern is on its way to confirming yesterday as a low.  Reversals using candles are different from other techniques. The Japanese consider a reversal as a turn from down to up AND a turn from down to side. Western techniques concentrate on the 180 degree turns. GOOGL could end its downtrend and trade sideways for a while rather than restart its uptrend.
The On-Balance-Volume (OBV) line shows a pretty good decline the past six weeks so a good reversal would include fresh strength in the OBV line.
The 12-day price momentum indicator is still making lower lows and thus not (yet) showing us that the decline has slowed. Signs that the decline has slowed should be watched for.

In this weekly candlestick chart of GOOGL, below, we can see some interesting clues. Prices declined quickly but are now showing a lower shadow below $1,050 telling us that these prices are being rejected. The 2018 lows in the $1,000 area are still intact.
The weekly OBV line shows a steep decline but the lows of 2019 are still intact. The 12-week price momentum study has not started to slow yet.

In this Point and Figure chart of GOOGL, below, we can see that there is a potential downside price target of $1006. If prices declined further to reach that price target it would be a new low on this chart. It would be helpful if GOOGL does not make a new low here. We will see what happens. 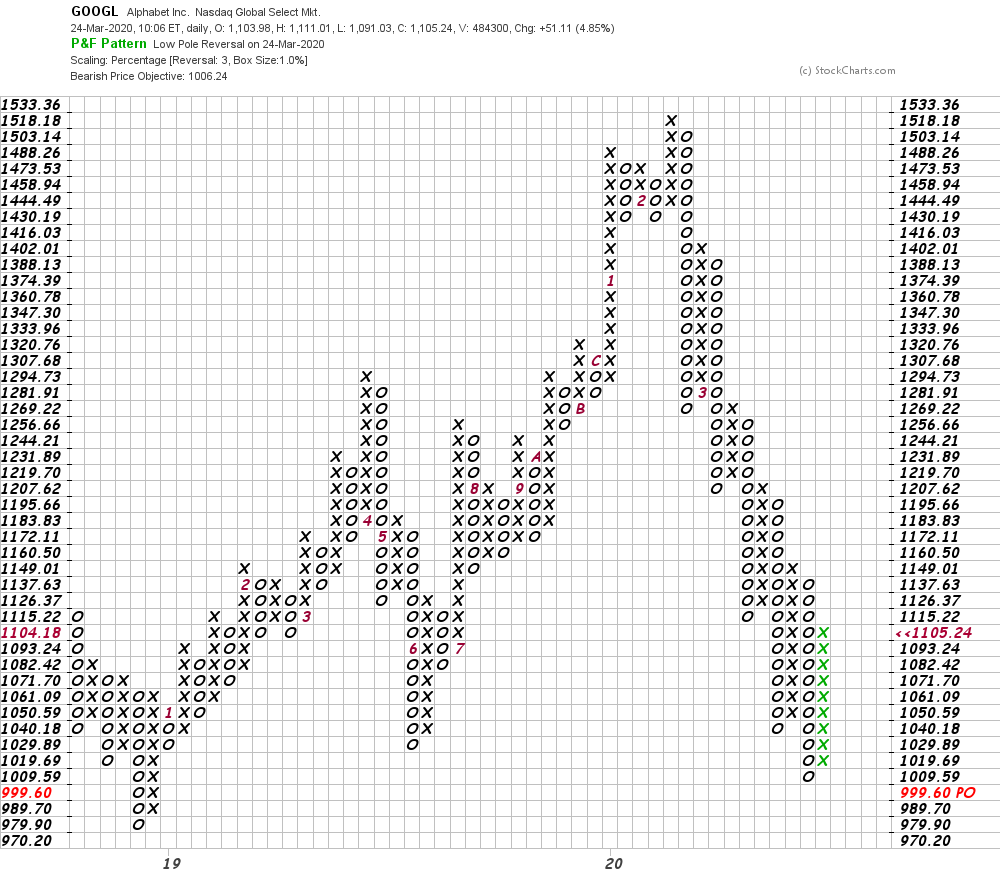 Bottom line strategy: At a market low keen observers look for leadership from individual stocks and from some of the 11 sectors. Strength above $1,150 would be a good sign for GOOGL and the broad market.

Get an email alert each time I write an article for Real Money. Click the "+Follow" next to my byline to this article.
TAGS: Investing | Markets | Stocks | Technical Analysis | Trading | Technology | Advertising | E-Commerce