Nike (NKE) released the firm's fiscal fourth financial quarter results on Monday evening. Nike beat Wall Street on both the top and bottom lines. This does not even begin to tell the story. The story of a tough quarter that could have been much worse and how the firm expects to proceed from here. This is that tale.

Wholesale revenues of $6.8B were down 7% or 3% on a currency neutral basis. Gross margin contracted 80 basis points to an even 45% as operating overhead expense increased 8% to $3B due to higher strategic technology investments and an increase in NKE Direct variable costs and wage-related expenses.

Nike ended the quarter with a net cash position of $12.997B, which is down 3.5% from a year ago as free cash flow was offset by returns to shareholders. That said, current assets were up 7% to $28.213B on the back of inventories which grew 23% to $8.42B. Inventory growth was driven by elevated in-transit product due to extended lead-lag times from ongoing supply chain disruptions.

Current liabilities increased 11% to $10.73B, primarily on an 18% pop in account payable. This makes sense given the inventory print. That leaves NKE with a current ratio of 2.62, which is excellent. Even without inventories, NKE runs with a quick ratio of 1.84, which is still excellent.

Total assets of $40.321B are up 7%. This number includes $570M in "goodwill" and other identifiable intangibles. That number is certainly not abusive. Total liabilities less equity amounts to $25.04B, including $8.92B in long-term debt, which is down 5% and $2.777B in operating lease liabilities. This is also down 5%.

Not only is this balance sheet in very good shape, leadership has displayed great skill in managing it through a difficult period. I am deeply impressed. Unfortunately, bloated inventories will weigh on margin going forward.

During the past quarter, Nike paid out $481M in dividends, which was up 11% from the year prior, while repurchasing $1.1B worth of common stock accounting for 8.5M shares as part of the four-year $15B repurchase program approved by the firm's Board in June of 2018. The Board has now authorized a brand new four year $18B repurchase program to replace the old.

Nike sees FY 2023 (the current quarter is Q1) revenue growing low double digits on a currency neutral basis, partially offset by foreign exchange headwinds of approximately 400 bps. For the current quarter, the firm expects real dollar revenue growth to be flat to slightly higher versus the one year ago comp due to continued Covid disruptions in China and more than a 500 bps currency related headwind.

Gross margin pressure is expected to exceed 100 bps for the current quarter as the firm recalibrates supply and demand in Greater China. The firm also anticipates higher promotional activity to sell seasonal inventory that arrived late due to disruptions.

I can find nine sell side analysts who are either rated at four or five stars by TipRanks who have also opined on NKE since these earnings were released last night. After accounting for changes, there are eight "buy" or buy equivalent ratings and one "hold" rating. The average target price across the nine is $135.11 with a high of $155 (twice: Robert Drbul of Guggenheim and Randal Konik of Jefferies) and a low of $116 (Paul Lejuez of Citigroup who is our "hold"). Omitting one of the $155's and the $116, the average target price of the other seven analysts is $135.00. Almost no change.

I think Nike had a solid quarter all things considered. I think perhaps the firm is being very conservative in their look forward, carefully and intentionally. The balance sheet is a work of art, and at some point that matters. We all know that CEO John Donahoe who ran ServiceNow (NOW) previously, is a pro. I think the 38% decline in share price from November on was warranted given the circumstances. The stock still trades at 23 times forward looking earnings, which is not cheap, but is not insane, especially if the look forward is designed to be beaten. I am inclined to initiate NKE on weakness. 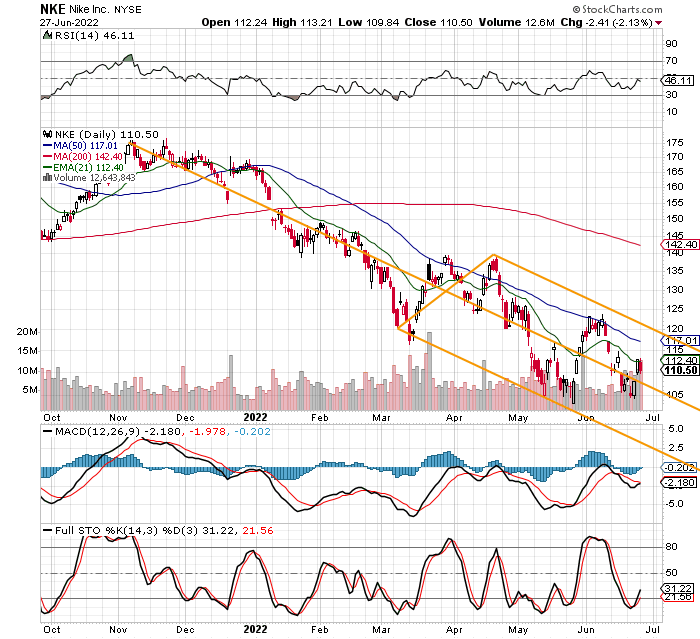 Some will see a downward sloping Pitchfork with no hope of breaking out that has been tested at both the top and bottom trendlines. They would not be wrong... but look again, below. 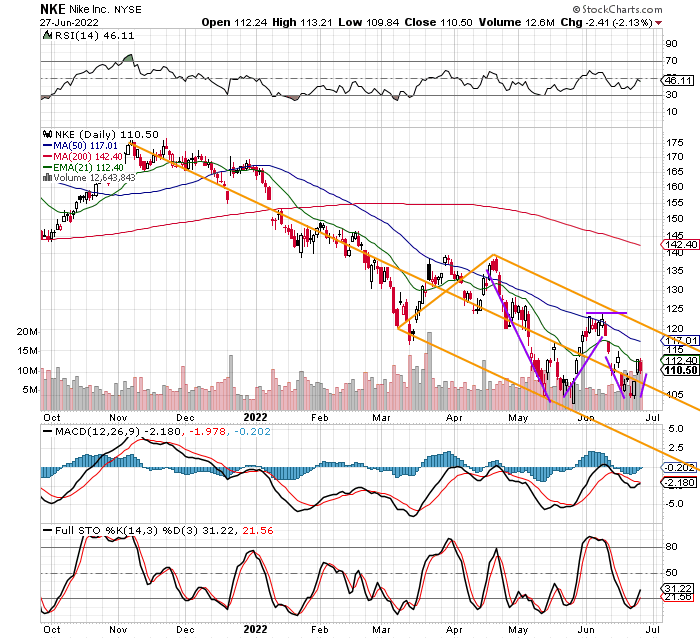 Others might see a developing double bottom reversal with a $123 pivot still under construction. Those folks would not be wrong either. I am one of those folks.

Note: I am flat right now. I will wait for this note to publish prior to taking any action for myself.

Get an email alert each time I write an article for Real Money. Click the "+Follow" next to my byline to this article.
TAGS: Earnings | Economy | Investing | Stocks | Technical Analysis | Trading | Apparel | Retail | Sports business | E-Commerce