Hogan reminded viewers that Align is a fully customized business, and all of their aligners are made to order.

When asked about the probability of increased competition or knockoffs, Hogan explained that their market is only 10% penetrated, leaving room for multiple players in their space. That said, he noted that it is very difficult to replicate Align's end-to-end solution from scanners to algorithms to 3D-printing technology.

Let's check out the charts of ALGN.

In this daily bar chart of ALGN, below, we can see that prices have been under selling pressure the past 12 months. The decline this calendar year has been particularly cruel with prices off more than 50% from January to March. ALGN has rebounded but I cannot get too excited about the recovery. Prices are back above the declining 50-day moving average line and so far have stopped at the underside of the declining 200-day moving average line.

The trading volume has not been particularly robust and the On-Balance-Volume (OBV) line declined from January into March telling us that sellers were more aggressive. The OBV line has come off its low point but it hardly says that buyers are more aggressive now.

The Moving Average Convergence Divergence (MACD) oscillator has come back up to the zero line for a buy signal.

In this weekly bar chart of ALGN, below, we can see that prices have been in a longer-term decline from 2018. Prices have rebounded to test the declining 40-week moving average line.

The weekly OBV line shows losses from the beginning of 2020 and the MACD oscillator has yet to cross to a cover shorts buy signal on this time frame.

In this Point and Figure chart of ALGN, below, we used daily price data to construct the X's and O's. The software sees the pattern as accumulation and is projecting an upside price target in the $254 area. 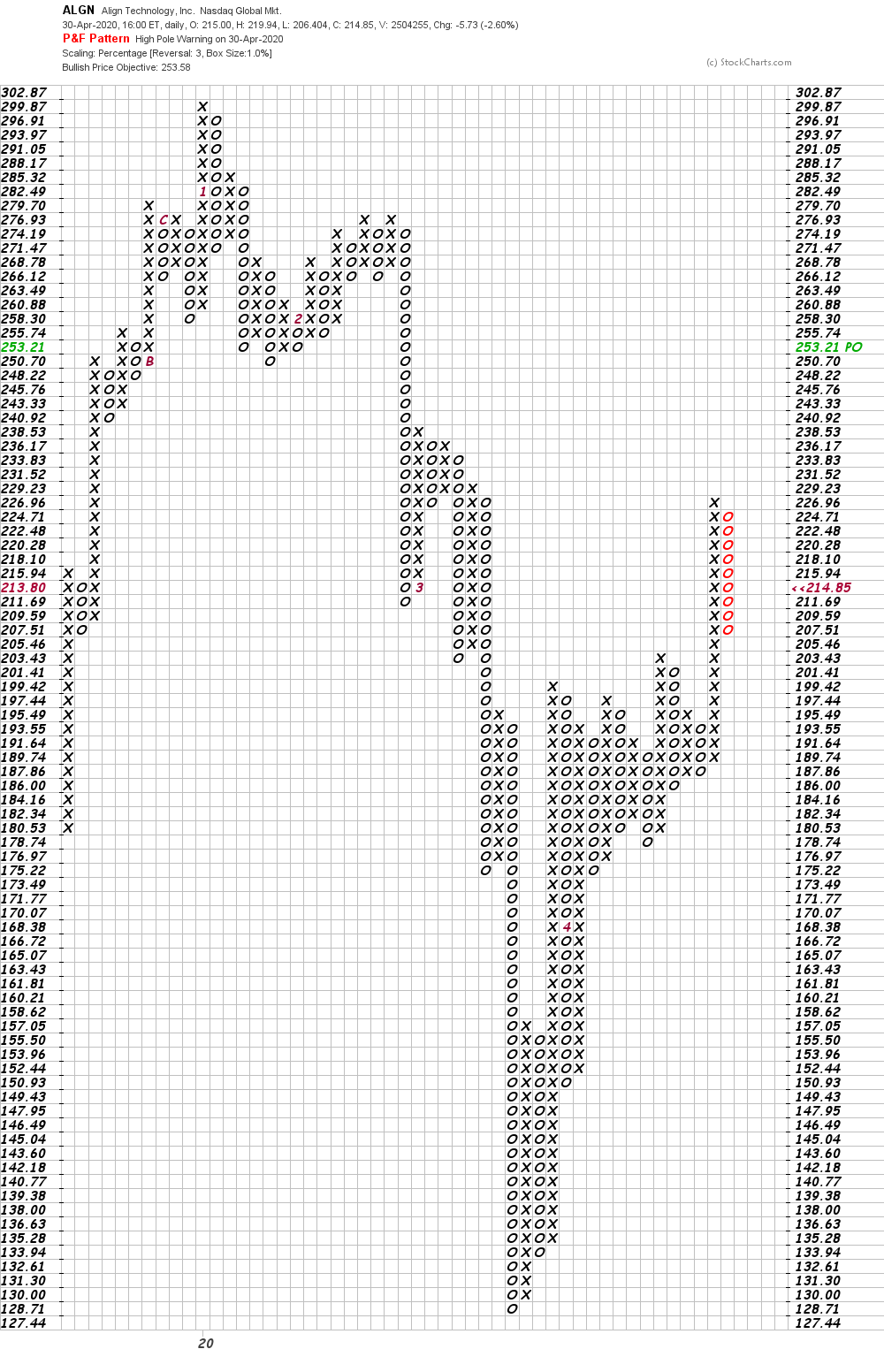 Bottom line strategy: The rally in the price of ALGN from the March low looks like a bounce in a longer-term decline. While prices could push a bit higher to the Point and Figure target of $254, I don't see clear signs of aggressive buying to make this a buy recommendation.

Get an email alert each time I write an article for Real Money. Click the "+Follow" next to my byline to this article.
TAGS: Investing | Stocks | Technical Analysis | Trading | Health Care Equipment & Services | Mad Money | Executive Interview

Airbnb May Not Be So Hospitable in the Weeks Ahead

NovoCure Has Broken Down on the Charts: What to Do Now

Our latest analysis and trading strategy on NVCR.