Sometimes it's not all about earnings. Sometimes it's about policy and regulation. Then again, sometimes it is about a big sales event... or not. On October 27th, Alibaba Group (BABA) traded above $319 per share intraday only to sell off over the next week or so. On November 5th, the firm reported its fiscal second quarter financial results. They were solid. Earnings growth of 44% on revenue growth of 38% easily beat expectations.

Both Cloud Computing and Digital Media & Entertainment beat the street, but Core Commerce, easily Alibaba's largest business did fall short of what investors were looking for. The stock wobbled a little at first, and then regained its footing. The next day, November 6th (last Friday), the shares traded above, and closed just below the $300 level. That's when things got ugly. Even going into the planet's largest on-line sales event, "Singles Day." For those unaware, Alibaba's Singles Day is akin to Prime Day at Amazon (AMZN) , only many times larger. Sales for Prime Day in terms of gross merchandise value this year amounted to more than $10 billion. At last glance, (Singles Day is Nov 11th) the numbers were not final, but I did see an early print of $56 billion go by for this year's event, which would crush Alibaba's own record of $38 billion set last year.

Still, the shares sold off on Monday, sold off especially hard (-8%) on Tuesday, and are lower still in early Wednesday morning trade. So why the beatdown? Let's dig in.

(For more on BABA, see Singles Day Begins With a Bang in China, and a Stock Plunge)

What happened, and this is broader than Alibaba, is that the Chinese Communist Party's State Administration for Market Regulation is looking into drafting anti-monopoly (antitrust) rules that would target online platforms. This has badly damaged many stocks that don't trade here in the U.S., and you may have never heard of. That said, Alibaba is Asia's largest tech stock, and would be harmed by such regulation. Other well known corporations that have taken it on the chin this week include Tencent (TCTZF) , and JD.com (JD) .

Readers will also recall that last week regulators in China put a halt to the Ant Group (which is a fintech) IPO that had been valued at $34 billion. Why is that a big deal? Simple. Ant Group is controlled by retired Alibaba CEO Jack Ma and the company itself (Alibaba) is an Ant Group shareholder.

U.S. tech firms come under regulatory scrutiny here at home as well as in Europe. Sometimes there are fines to be paid, sometimes certain behaviors are modified, but the stocks somehow manage to navigate these issues quite well. I speak of Amazon, Alphabet (GOOGL) , Facebook (FB) , Apple (AAPL) , and Microsoft (MSFT) . Should not Alibaba react similarly? That's the great unknown. Our hearings are, or make an attempt to be, transparent. Our leadership may not like criticism, but is ultimately unable to stop it. Conditions are different on the other side of the Pacific. I am flat BABA and I really see no reason to own any stock domiciled in a nation that runs on a different set of rules than what we would consider normal or open. Oh, you may make a ton of dough trading Chinese stocks. I hope you do. Just understand that you do so while you might not exactly understand the risks involved. 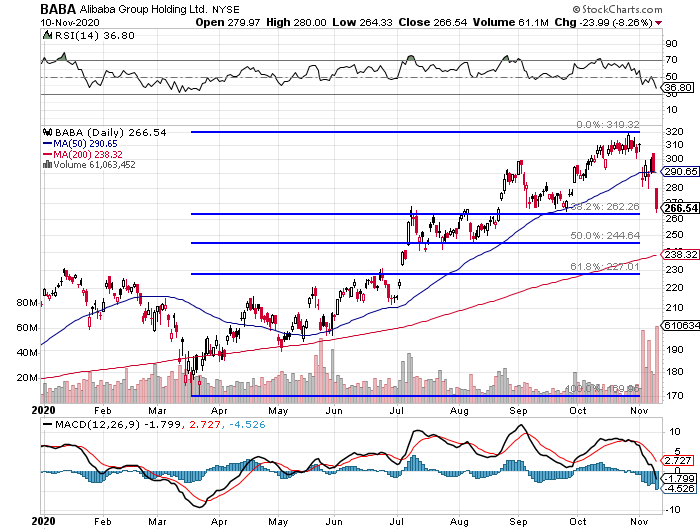 Alibaba appears to have found support at the 38.2% Fibonacci retracement level of the March through October rally. That's key. This spot breaks and there is no reason I see that could halt an approach of the 200 day SMA at $238. That said, if looking to add, I think (I am not involved) that I would rather buy on upside momentum off of confirmed support than to try to pick a bottom. If these firms have raised the ire of the government over there, then the bottom may not be in.

Get an email alert each time I write an article for Real Money. Click the "+Follow" next to my byline to this article.
TAGS: Earnings | Investing | Markets | Politics | Stocks | Technical Analysis | Trading | E-Commerce | China