Thursday's trading was definitely interesting. The decline received a lot of media attention. Bears who have been wrong for weeks or even months got to come out of hibernation. People who held off buying soaring tech stocks gave a sigh of relief after kicking themselves for weeks on end.

The Dow Jones Industrial Average fell 2.78%, the more closely followed Nasdaq fell 4.96% and the S&P 500 lost 3.51% on Thursday. Shocking. On the Nasdaq, 3.43 billion shares of the 4.49 billion shares traded was down volume. That is not particularly intense selling pressure and certainly not a so-called 90% downside day. Oh and let's not ignore the 1.05 billion shares of up volume. Just saying.
Market observers have been complaining for months that the breadth of the market has been narrowing. That the market's movement was disconnected from the real economy and the COVID-19 reports. Just a few large tech names have been powering the gains. And on and on.
Market writers tend to write differently depending on their position. It is human nature. There is one market professional I have known for about 20 years who became very bearish in March -- and has been unable to switch gears enough to become bullish.
First, he looked and waited for a retest of the March lows. Then he couldn't get beyond the news about the pandemic and the collapsing economic numbers to see that the slope of the moving averages was turning positive. This individual lived through the 2002 decline and the 2008 decline, but for some reason he seemed more confused or reluctant to look beyond the news and focus on the Fed doing whatever it takes. As prices approached the February highs, the chorus of "Double Top" grew. But that, too, got brushed aside as the market moved still higher.
I entered the business during the 1973-74 bear market, and it took me years to get over the scars of that bear market. So I know how much your own personal circumstances can influence your thinking. It is human nature. It is hard to be totally objective.
Other market observers have complained that small traders and novice traders have been piling into the markets recently. They have a name -- Robinhood traders -- and that has been interpreted as bearish, as the uniformed "sheep" have to be led to slaughter.
Stock splits became a reason to buy. Vaccine news became a reason to buy. Success in e-commerce became a reason to buy. Rumors in chat rooms became reasons to buy. Working from home or not working at all allowed us time to trade from home. Valuations, I am told, became very stretched -- but the uptrend continued.
Let's look at some charts.
In this daily bar chart of the ( QQQ) , below, we can see that prices declined sharply in February and into the middle of March before reversing to the upside. Trading volume was huge in late February and through March. Prices rebounded in late March, as white knuckles abounded, but the number of new 52-week lows slowed (not shown).
There was a short and shallow dip in early April, and that was the "retest" of the March low. By the middle of April, prices had rallied above the 50-day moving average line and the 200-day moving average line. By late May the slope of the 50-day line had turned positive.
The On-Balance-Volume (OBV) line moved up steadily with the price action to confirm the price gains and tell us that buyers of QQQ were more aggressive. There is no bearish divergence between the price action and the OBV. The 12-day price momentum study shows higher highs from August into September -- and thus no slowing of the pace of the rise and no bearish divergence when compared to the price action. 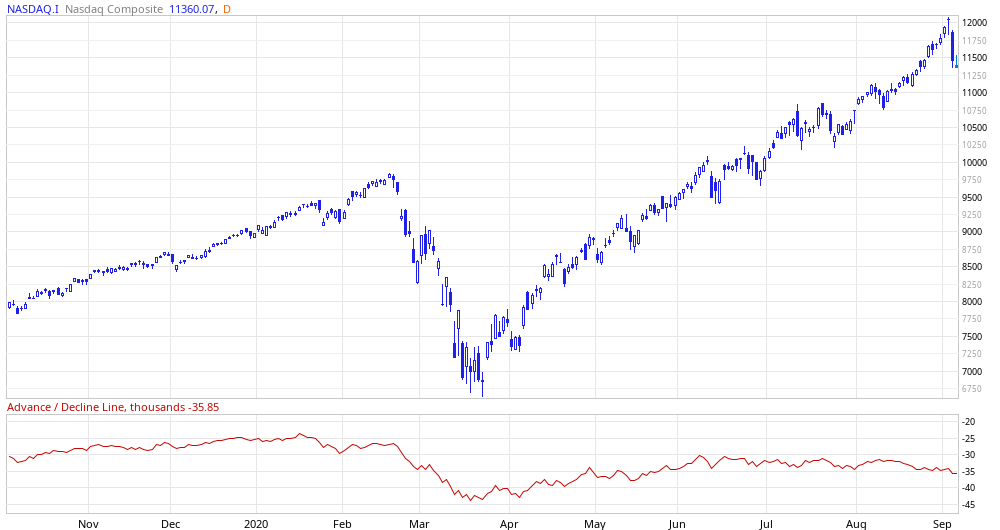 In this chart of the S&P 500, below, we show the S&P 500 and its advance-decline line. This "picture" of the market does not show weakening breadth. 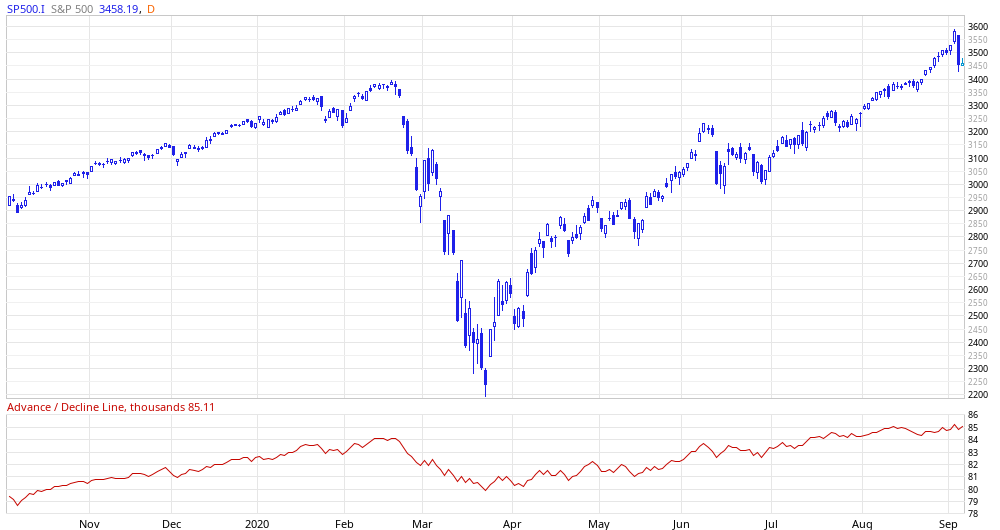 In this weekly QQQ chart, below, we can see that prices are above the rising 40-week moving average line. Prices are not particularly extended (i.e. overbought) above the 40-week line. The weekly OBV line has been firm since March and is close to making a new all-time high. The 12-week price momentum study shows that price momentum has slowed from July, but I would not call this a bearish divergence.

Bottom line: I don't really have a strategy for you here, but just more observations. The rally from March has been amazing in many respects and while we can all find some reason(s) or statistics to talk ourselves out of profitable longs, we are probably going to see higher highs and more overbought readings in the weeks ahead. Just as prices got grossly oversold in March, I suspect prices will get grossly overbought into November before a significant correction unfolds.
Get an email alert each time I write an article for Real Money. Click the "+Follow" next to my byline to this article.
TAGS: Indexes | Investing | Markets | Stocks | Technical Analysis | U.S. Equity