Thursday night was a horror. The first snow/ice storm of the season. The kind of road conditions that motorists dread. I read that there were something like 465 accidents just on New York City roads overnight. Who knows how many more in the burbs? I can believe it. Took my car five hours and 40 minutes just to move roughly 50 miles. The car got stuck twice and nearly veered off of the road three times. Oh, and the mass transit option was not even running, so a lot of folks were mired in a significant state of misery.

What I was aware of, and most other commuters were not, was that for investors, a handful of names reported quarterly earnings results. That handful would disappoint, and that handful would be punished severely. Early Friday morning equity index futures seem to be holding their own after a strange session on Thursday. Markets had reacted well to breaking stories that perhaps the U.S. had softened it's demands of China on trade going into the G-20 meetings in Argentina in two weeks. Those kind of hopes were downplayed later in the session. By then, though, comments made by Atlanta Fed President Raphael Bostic that maybe he felt that short term rates in the U.S. were already nearing the point of neutrality (a mythical level perceived as neither accommodative nor restrictive) were extremely well received by the crowd.

You know that I feel the greater threat comes from the pace of quantitative tightening, but I welcome any evolution of developed thought at the central bank. These comments and some of those made by Fed Chair Jerome Powell on Wednesday evening do suggest that there is a growing cognizance of widespread threats to U.S. economic expansion, both internal as well as external.

Those positive vibes did not extend into the evening, as Nvidia (NVDA) , Applied Materials (AMAT) , Nordstrom (JWN) , and Williams-Sonoma (WSM) all stepped to the plate with quarterly results. For one reason or another, all four would strike out looking. The most glaring defeat among the group will be that of Nvidia of course. The poster child for the technology revolution, as well as the engine behind gaming, and the cloud posted a highly profitable quarter, but also revenue growth of 21% that fell short of expectations. To make matters worse.... in fact to make them much, much worse, the firm guided revenue for the current quarter significantly lower. CEO Jensen Huang also acknowledged excess inventories related to the recent collapse in demand for crypto-currencies. This will take weeks to work through, and despite the firm's place as the industry leader, it did not inspire confidence, at least not to me.

Applied Materials also guided the current quarter lower. This overnight weakness extended to the rest of the semiconductor space. Only Intel (INTC) , though trading lower, seemed to escape absolute carnage as that firm had chosen the perfect evening to announce the addition of $15 billion to it's own corporate repurchase program.

What To Do About It

I gave you a NVDA trade at Real Money and Real Money Pro on Thursday. Can't run from that. There are some good, but mostly some lousy results associated with that trade. If you thought I would just write about something else today, and pretend that I had not steered you wrong, well... I do make mistakes. Everyone does. Honor though, once stained is nearly impossible to clean. Better to just own up.

So, the best thing about yesterday's trade was that through the hedge, the majority of risk exposure was transferred from the $200 level to the $180 level. I have already stressed the importance of defined targets and defined panic points. This, gang, illustrates precisely why we hedge our positions, especially in dangerous names. Yes, being committed at $180 is going to leave a nasty mark, but holding the bag at the $200 level might just be a season ending injury.

What I am going to do (Yes, I am in that foxhole with you) is watch the shares at first. My panic point for this equity was $175 if you recall, but my equity stake is down to small, my options exposure is greater. (I had shorted the $200 Nov 16th puts as well, but got cold feet on Thursday afternoon. That was close. Could have been disastrous. That extra-curricular activity actually turned a profit.)

Unless one has $18K sitting around waiting to be invested per contract, the short will have to be covered sometime Friday in order for the investor to get any sleep this weekend. This will sting, and may require the sacrifice of a winner elsewhere such as yesterday's Amazon (AMZN) trade (Hopefully you follow me at Twitter or StockTwits), though that name will open lower this morning, there should still be some profit in it.

I have been asked at several points overnight if Nvidia is a buy here. It very well might be, but Huang did not seem confident to me last night. Perhaps that is my own perception, but I am not a motivated investor at this point. If you go this route just to try to make some money back, you will do that without me, but I need you to remember... you still need a target price and a panic point, and those levels probably need adjustment. I would also go about this trade the same way we did yesterday, with proper hedging in place. How? For every 100 shares purchased the trader needs to sell one covered call to the upside, and either purchase one put to the downside, or my preference which would be to put on a bear put spread. This way, likely timed around February earnings, the protection ends up paying for itself.

My guess is that most of the readership has noticed the broad beatdown being handed the multi-line retailers. Walmart (WMT) in particular took it on the chin on Thursday despite what was really a very good quarter that showcased nice growth for both same store sales and e-commerce. What obviously weighed on investor sentiment was a slight revenue miss created by a decline in international sales that also provoked so-so guidance.

On retail, much was made of the Census Bureau's October upside surprise. That 0.8% m/m growth must be taken in stride however. Why? Simply because the September print was revised to -0.1% from +0.1% creating a much lower base for the October data. On top of that, once automobile purchases and gasoline are stripped out, the print dwindles to a still respectable, but far less spectacular 0.3% m/m. That 0.3%, btw ... fell short of expectations. Keep in mind also that gasoline prices have not held October levels, and the sudden demand for a set of new wheels also illustrated by dramatically increased prices for used cars in Wednesday's October CPI release is likely a storm related one-off and not sustainable as monetary conditions tighten.

Still, Black Friday is next Friday, and Cyber Monday... three days later. November remains November, and December remains December. What that means to me is that I am adding to my favorite retailer on weakness. That would still be Kohl's (KSS) . I added to the name yesterday, and if the space is weak today, I expect to do so again. I have a much lower basis in this name, adding above cost is not something I make a habit of. That said, the name has retreated a rough 11% just from the November highs, still cooperates with Amazon, still pays shareholders 3.3% just to be there, and still appears from my own myopic view to be well managed. Kohl's reports next Tuesday, and to tell you the truth, I love (usually, no guarantees) a stock that sells off in front of earnings. 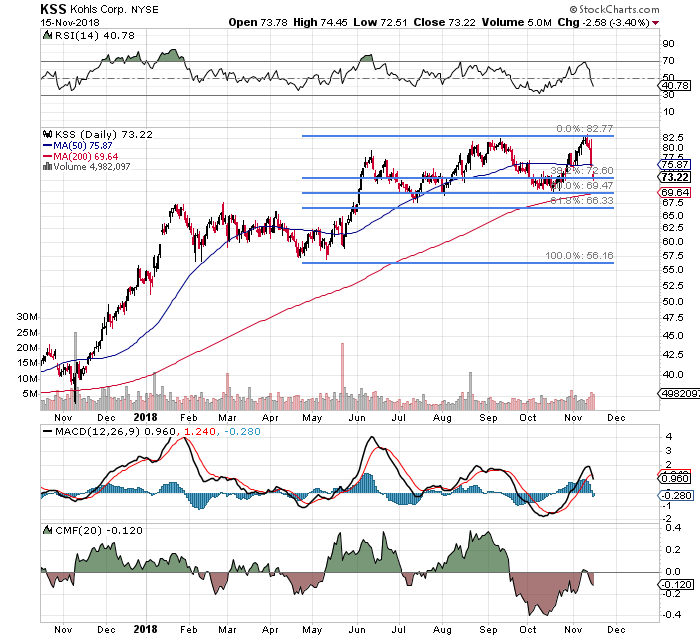 Since the Spring, this name has played to it's Fibonacci levels with the precision of a Stradivarius. The day to day indicators such as Relative Strength, MACD, and Money Flow have all turned against this stock ahead of next week's digits. What stands out to me? That 50% Fib retracement level has lined up with the 200 day SMA at the 69.50-ish level. I don't know if we see that spot before Tuesday, but I do know that I am okay exposing myself to increased risk there.

Long KSS? I am, and I am comfortable with an add at $69.50. This is how I'm thinking about playing this game.

Note: This will increase my downside exposure, but also will reduce net basis per 100 shares by an aggregate $2.27. That's not chump change, that's actually 3.1% of Thursday night's closing price.

For Those Playing With Scared Money

This strategy will in total increase net basis per 100 shares held by 75 cents, but that 75 cents will buy the trader $3.50 worth of downside protection in the event of an earnings related disaster.