Operating loss amounted to $-226.6M compared to $-209.3M for the year ago comp, driven by investment in sales and marketing that include a $102.4M related to warrants granted to Amazon (AMZN) in November of last year. This expense was partially offset by an $81.3M decrease in stock-based compensation compared to the year prior.

Perhaps the single most important or significant forward looking announcement made by Affirm last night was the revealing of the firm' plan to achieve sustained adjusted operating income profitability on a run rate basis by the end of fiscal year 2023. That's why the shares were trading higher.

Affirm ended the quarter with a net cash position of $3.293B and current assets of $5.764B. Current assets amount to just $401.2M. That's good for an almost unheard of current ratio of 14.4. Total assets of $7.032B includes $608.3M in "goodwill" and other intangibles. Even excluding all intangibles, assets still easily outweigh total liabilities less equity of $4.456B. One thing, there is a lot of debt on this balance sheet. Across several varieties of debt, the total comes to about $4.054B. This balance sheet does pass the Sarge test, but that is a lot of debt and not even completely covered (not that it has to be) by a very large cash position. That's really what keeps this balance sheet from getting my highest marks. 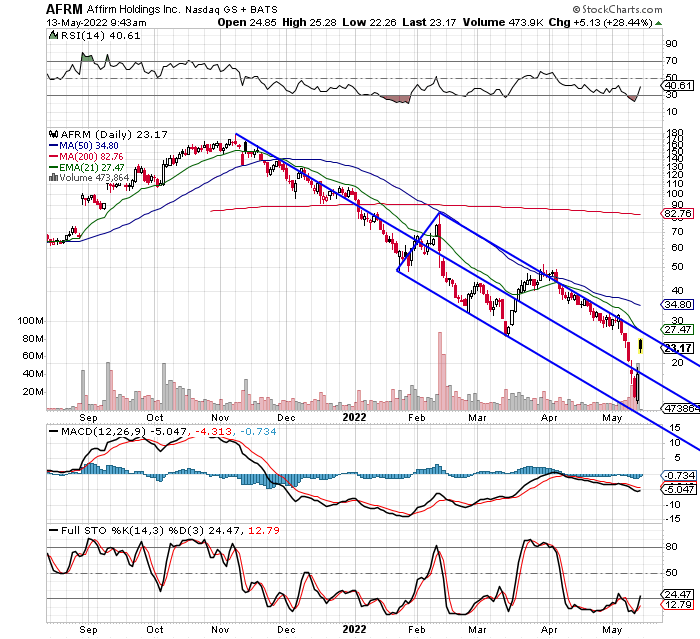 AFRM went out on Thursday afternoon deeply if not technically oversold. Just ask the stock's Relative Strength Index and Full Stochastics Oscillator. They'll tell you. The daily MACD is kinda, sorta ugly as well. The stock traded as low as $13.64 on Thursday ahead of the market's bullish reversal. That means that the shares at $23+ have almost doubled in 24 hours. I don't think I want to buy this kneejerk rally on a move like that. I do want a piece of the action though.

Get an email alert each time I write an article for Real Money. Click the "+Follow" next to my byline to this article.
TAGS: Earnings | Investing | Stocks | Technical Analysis | Trading | Financial Services