AeroCentury Corp (ACY) served at one of yesterday's WTF stocks. No, I'm not talking about the Washington Football Team, although they've had their fair share of moments. Proper decorum prohibits disclosing the full description of small, unheard of names that are moving 50%, 250%, or even 1250% in a day on little to no news.

The only news was the company maintained its listing on the NYSE via the AMEX. A month ago, the aircraft leasing company reported a net loss of $4.1 million, or $2.64 per share. During the first nine months of the year, it lost $27.8 million or $17.97 per share. Book value dropped to negative $2.35 per share as well. The lone bright spot was a positive EBITDA of $900,000.

But the float, ah the beautiful float of only 1.1 million shares, worked perfectly when paired with a stock price under $4.00. A little momentum later and the stock doubled by 10:15 am EST. Thirty minutes later, it printed a high around $21. The chase was officially on. Where the stock stopped was anyone's guess.

That's been the challenge on these. Not only where do you buy, but where do you sell. A run from $4 to $20 would seem untouchable in most other environments but buying the chase can be rewarding. In this case, ACY hit $38 within the next 15 minutes. But for traders that didn't scale out with profits on the way up, tragedy struck. All right, maybe tragedy is a bit dramatic. The stock was halted at 11 am EST.

For the buyers at $20 and above, this is the time when the sweat starts pooling in places you don't want to sweat. The stock didn't reopen until 2:55 pm EST, shortly after the company said it knew of no reason why shares were up that much. After reopening just above $20, panic selling swept the stock to the low teens. It did bounce back to $20, possibly on short-covering or scalpers, but that was short-lived. Ten minutes later, we were back under $17 to stay.

Shares closed the day at $13.85, still a great gain on the day. However, chasers who didn't sell were trapped. The stock opened lower today, now down 37.5% as it continues to struggle post-halt. 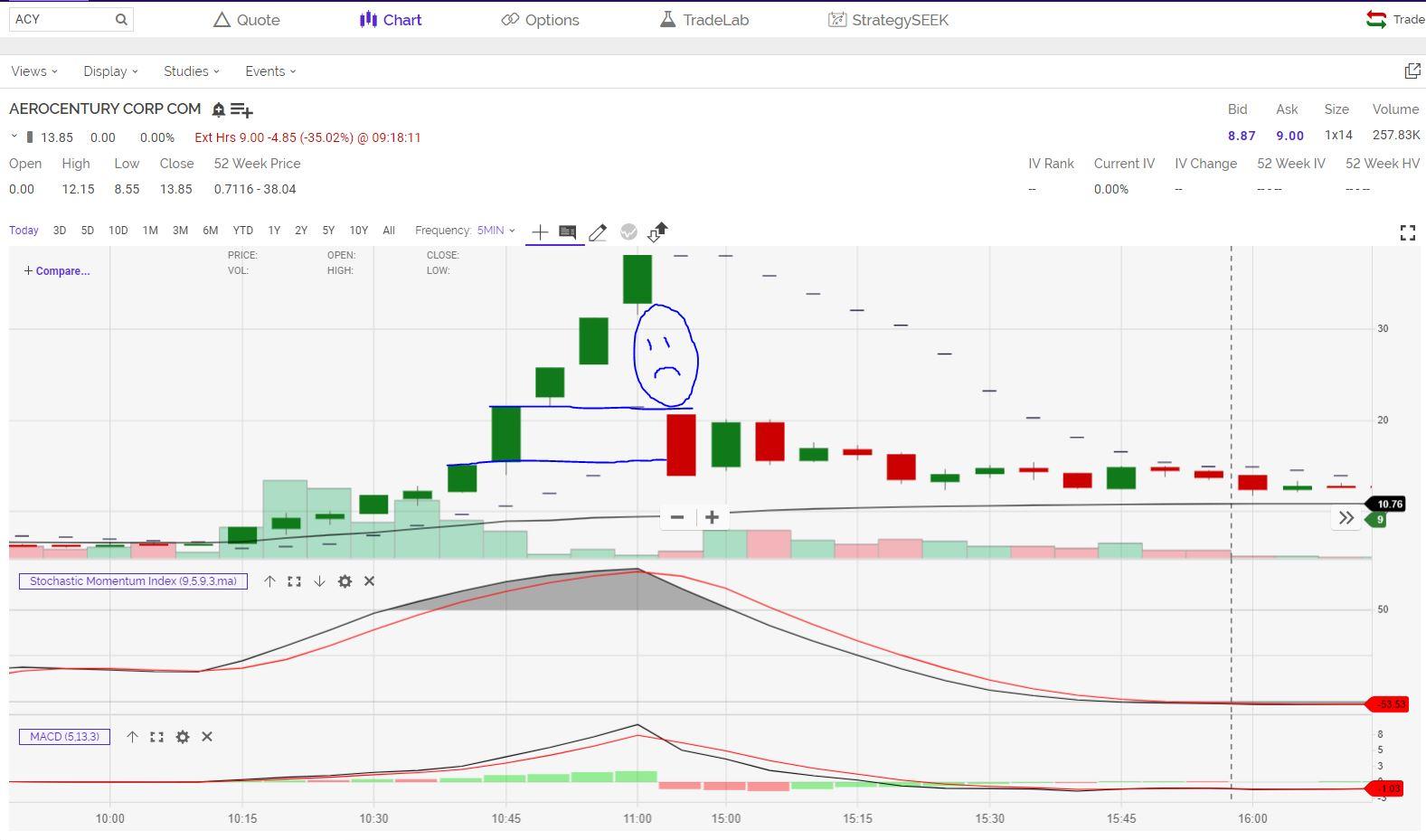 This is a prime example of the risk a trader faces with these WTF moves. While many have allowed a trader to exit on a reversal lower, I believe we're going to see more and more halts for longer periods of time. It won't take many of these -50% post-halt openings to quiet some of the recent WTF action.

Once again, chasers buying at the open had zero opportunity to exit with a gain post-halt.

This is a change of character worth noting. The more this happens, the more likely we are to see this continued transition from the very aggressive valuations on small or private-to-public businesses back over to the large-cap names that were loved earlier in 2020. Two days doesn't make a trend, but you do need two days to start one so keep a close eye on this action. If we see a day three and you aren't making adjustments, you will want to make sure you have a clear understanding of your risks into 2021.

Is It Luck or Is It Skill?

Luck impacts our trading much more than we realize. Acknowledging that fact can help improve results.

These 2 Names Are on My Watchlist Right Now

Here's what to look for with Playboy and Urban-gro.