She did it again. Long time Sarge fave Advanced Micro Devices (AMD) reported the firm's third quarter financial results on Tuesday evening, and just wow... She did it again. If you read me often, then you well know that I have been a fan of AMD CEO Lisa Su pretty much since she started to turn AMD around, and simply put... she and her firm, especially of late, never cease to amaze.

For the reporting period, Advanced Micro Devices posted adjusted EPS of $0.73, up 78% year over year, and GAAP EPS of $0.75. By either metric, Lisa beat Wall Street. The firm generated revenue of $4.31 billion. That number also beat expectations, and was good enough for year over year growth of 53.9%, a fifth consecutive quarter resulting in revenue growth of greater than 50%, and an eight consecutive quarters of greater than 25%.

It's golden. No joke. The firm's cash balance (cash, equivalents and short-term investments) has increased 57.5% to $3.608 billion year to date. Total current assets have grown by nearly $2 billion over nine months, while Total assets have grown by slightly more than $2 billion. Not only do current assets dwarf current assets, current assets (and especially total assets) dwarf total liabilities less equity. The firm has some short-term debt, but literally no long-term debt on the books. In fact, shareholder equity amounts to roughly 64% of the entry for total liabilities and shareholder equity combined. Still the firm bought back 7 million shares of common stock for $750 million throughout the third quarter. That's called kicking tail, my friends.

For the full year, AMD is guiding revenue toward growth or 65% drive by of all businesses. Some of you may recall that Lisa Su guided toward growth or 37% for FY 2021 at the end of CY 2020. The more recent guidance that this is up from was for growth of 60%. The firm expects to sustain an adjusted gross margin of 48%. For the current quarter, AMD expects revenue to land close to $4.5 billion give or take $100 million, which at the midpoint would be growth of 39%.

In a "drop the mic" moment during the call, Lisa Su stated that she expects the market for PCs to be flattish for 2022, as she insinuated a lack of concern given that she expects AMD to keep taking market share away from - sort of, it's not that close anymore - rival Intel (INTC) .

The firm does expect the Xilinx (XLNX) deal to finally close at some point this calendar year. Su is excited about the expansion of the portfolio that this deal will bring, especially in the fields of artificial intelligence and adaptive computing, which is a huge deal as AMD sets its sights on fellow Sarge fave Nvidia (NVDA) , and the very high end of computing projects such as Facebook's (FB) much hyped Metaverse.

... That data center sales doubled and that is just one of several astounding headline take-aways from AMD's quarter. There is much awesomeness to go around. 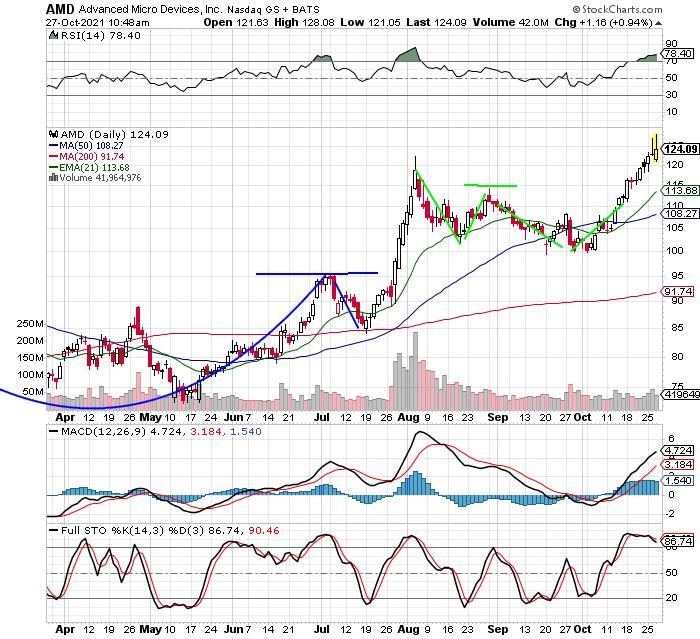 This stock broke out of a $114 pivot created by a double bottom pattern in mid-October, after breaking out of a cup with handle provided $95 pivot in late July. That first pivot provided support for the double bottom. This chart is so geeky, it's cool.

On the cautionary side, Relative Strength, the Full Stochastics Oscillator, and the dairy MACD are all sending "overbought" messages and that could cause the stock to tire a bit after running into earnings. That means that AMD could see some wiggle here. On the bright side, the stock has accomplished all of this without creating any unfilled gap. So one common gravitational force that usually exists in hot stocks doesn't exist here.