Incredible. If you have followed me for very long at all, you probably already know that I have long (for years) labeled Lisa Su "The Best CEO" in the semiconductor industry. If one is aware of how highly I think of Nvidia's (NVDA) Jensen Huang (Lisa Su's cousin), one understands the level of admiration that the statement reveals.

By now, readers are likely well aware of Tuesday's market leading headline. Advanced Micro Devices (AMD) has entered into a definitive agreement to acquire Xilinx (XLNX) in an all-stock deal valued at $35 billion, or about $143 per share. XLNX closed on Monday at $114.55, so the deal represents almost a 25% premium paid. Due to this breaking news, Advanced Micro Devices released the firm's third quarter financial results on Tuesday morning instead of after the closing bell later on in the day. You want to know if you should add, or even be in AMD at this point? I am long the shares and have been for quite a while, so I am asking myself this very question. That said, let's dig in.

Advanced Micro Devices reported a great quarter, and increased forward looking guidance. For the third quarter, AMD posted adjusted EPS of $0.41, besting expectations on revenue of $2.8 billion, also a beat. In fact, these numbers show earnings growth of 128% on revenue growth of 56%. Not too shabby. It gets better.

Breaking down the numbers across business units, Computing and Graphics (PCs, data center, integrated GPUs) contributed $1.67 billion toward total revenue versus consensus of $1.149 billion. This unit reported sequential growth of 22% and annual growth of 31%. The Enterprise, Embedded and Semi-Custom (including gaming consoles) unit put a $1.13 billion print to the tape, better than projected and up 101% sequentially while up 116% year over year. For the firm, gross margin landed precisely on industry consensus of 44%, which was up from 43.3% in Q2.

As if the results were not good enough, the guidance was just as exciting. For the fourth quarter, AMD now expects to see revenue land in a range spanning $2.9 billion to $3.1 billion versus Wall Street's view of $2.62 billion, while gross margin improves to 45%. For the full year, the firm now increases expectations for revenue growth to 41% from prior guidance of 32%, while leaving gross margin at 45%. These results were a breath of fresh air in comparison to some of what we have heard from the tech space so far this early in "the season."

As you read in the first paragraph, AMD now has a deal in place to acquire Xilinx for $35 billion in an all-stock transaction. The good news? The deal would be immediately accretive to margin, cash flow and earnings, while synergies of roughly $300 million become apparent within the first 18 months upon closing. Bad news? There are some for existing AND shareholders. Xilinx shareholders will receive 1.7234 shares of AMD for each share of XLNX. In addition, the deal will have to run the gauntlet of regulatory approval including that of the Chinese government. This deal may not close until late 2021.

Why Xilinx? Simple. Xilinx is different. Xilinx makes field programmable array chips that are flexible enough to be used in a variety of ways. This is why these chips provide more than $3 billion in annual sales. These chips are useful in cloud computing, expanding 5G networks, and in artificial intelligence. This enhances Lisa Su's focus on the data center, while allowing for a more competitive stance across all of these businesses within the broader industry.

What this also does is set up AMD to continue to take market share from Intel (INTC)  - remember Intel's acquisition of Altera in 2015. That's this market precisely. The flexible field programmable chip. This also through increased Total Addressable Market (TAM) allows the combined firm to compete well against the likes of Nvidia, even after the Mellanox deal.

I think Lisa Su has done it again. My only warning to you the reader is that of my bias, which is already apparent. Will I add right here, or close on a shallow dip? No, I can not, I am up almost 160% in the name, and can not add up here, but there is a spot where I will. 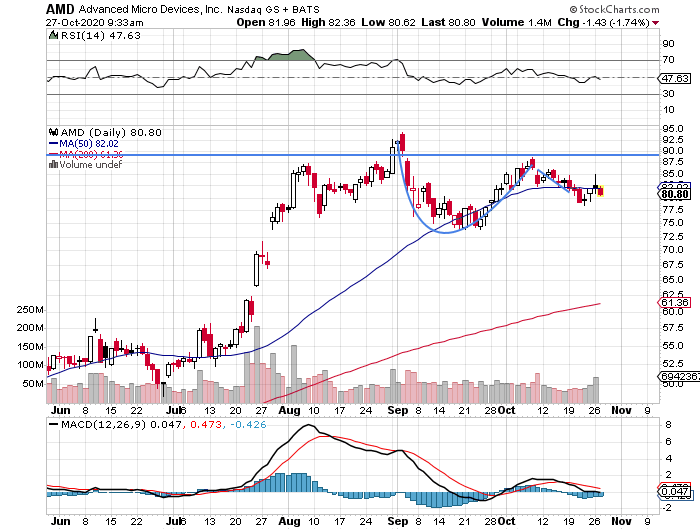 I showed readers this chart recently. This one is either a cup with handle pattern (bullish), or a head and shoulders pattern (not so much). Support will be tested upon how much the firm is paying for XLNX and how dilutive this action is. Still, on their own, which they will be for another year or so, AMD is doing very well.

I think we can expect some short-term weakness. Forget about the 50 day SMA for now. The spot that worries me is the September low close to $74. I will buy more equity there. That spot cracks and we'll have issues to deal with. Until then, I am fine. The pivot, which was $94 will now come under review. Should this handle develop, that pivot will move down to $88. That would give us a target price of $105. Very interesting. Keep an eye on Taiwan Semiconductor (TSM) here as well. That foundry will remain heavily depended upon, regardless.

I am willing to sell AMD $74 puts expiring this Friday for about $0.35, and next Friday (after the election) for about $1.15. Even more interesting.

(Nvidia and Advanced Micro Devices are holdings in Jim Cramer's Action Alerts PLUS member club. Want to be alerted before Jim Cramer buys or sells these stocks? Learn more now.)

Get an email alert each time I write an article for Real Money. Click the "+Follow" next to my byline to this article.
TAGS: Mergers and Acquisitions | Earnings | Investing | Stocks | Technical Analysis | Trading | Semiconductors & Semiconductor Equipment | Technology