During Monday's Mad Money program, Jim Cramer said there was a great need for more data center capacity. This is welcome news for a host of tech companies. Last week we learned of strong demand from Micron Technologies (MU) , which spilled over into Advanced Micro Devices (AMD) , and other names.

Let's review the charts of AMD.
In this daily Japanese candlestick chart of AMD, below, we can see that prices made a strong rally from early October to the middle of February. The subsequent decline held at the rising 200-day moving average line as the lower shadows showed us how the lows were rejected. The downward sloping 50-day moving average line is being tested now.
The daily On-Balance-Volume (OBV) line made only a minor dip in February and then resumed its rise in March which suggests that sellers were not aggressive in the decline and buyers have been using price weakness to buy.
The trend-following Moving Average Convergence Divergence (MACD) oscillator turned bearish at the beginning of March but has since signaled a cover shorts buy message.

In this weekly Japanese candlestick chart of AMD, below, we can see a pretty positive picture. Prices are above the rising 40-week moving average line. There are not many stocks we can say that about right now.
The overall trend of the OBV line the past three years is bullish and we only see a slight decline in aggressive buying the past few months.
The MACD oscillator is in a take profits sell mode but the two moving averages that make up this indicator have begun to narrow and that often results in a new outright go long signal in the weeks ahead.

In this daily Point and Figure chart of AMD, below, we can see that prices just made a new high for the move up at $48.06. The chart is also projecting a potential upside price target of $64. 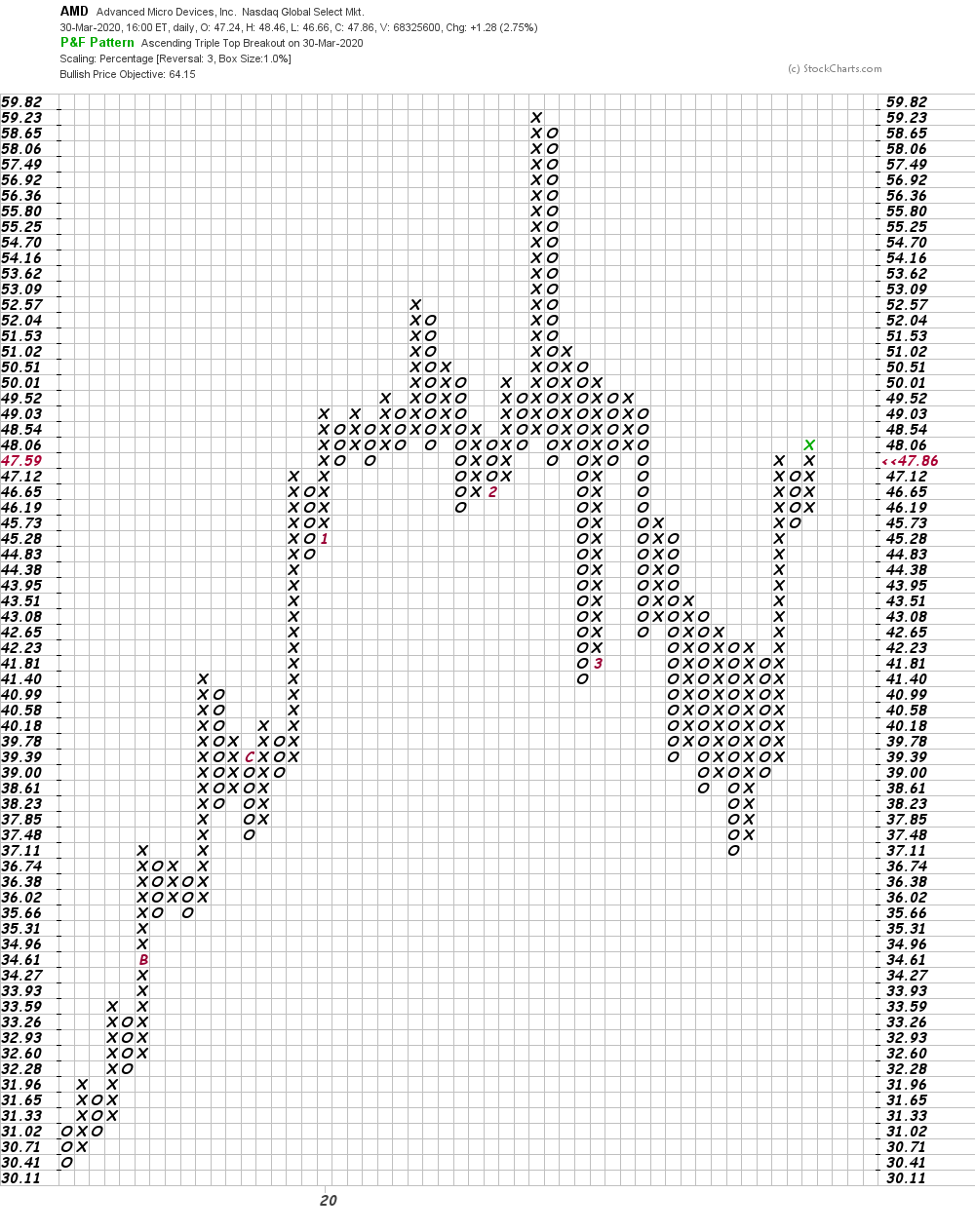 Bottom line strategy: With so many charts of companies in weak positions lately, it is refreshing to see charts so strong as AMD.  Traders and investors could look to go long AMD on a dip towards $45 risking a close below the price gap or below $42.
Get an email alert each time I write an article for Real Money. Click the "+Follow" next to my byline to this article.
TAGS: Investing | Stocks | Technical Analysis | Trading | Semiconductors & Semiconductor Equipment | Technology | Gaming | Mad Money