So, I looked myself in the mirror (That's a lie, I really sat at my desk and looked out my office window, but I could kind of see my reflection.) and I said, "Self, what can you give the readers for (Christmas, Hanukkah, Kwanzaa, Festivus, Wednesday, Other) this year?" I thought hard, and tried to write a highly intelligent piece where I would create through my own expertise a given trading opportunity based upon both sound fundamental and technical analysis. Phew, that was some heavy thinking. Glad that's over.

Instead, I thought... "What if I just address a well known Sarge name that has been on the move, that I have not addressed too recently. Maybe readers would appreciate that." I hope you do, because there was a tug or war in between my ears. (AMD) ? (MRK) ? AMD? MRK? (UTX) ? No.... AMD it will be. Not only is writing up my thoughts regarding Advanced Micro Devices (AMD) exactly what I am going to do, but any conclusion that I come to by the end of this piece, I will act on, once published. We really are in the same foxhole, folks, and we really are facing the same direction. Us against the world? You bet your sorry tail it is. Now, let's dig in.

Anyone who has read me for the past year or two, or seen me talk about the semiconductor space on Fin-TV, knows that I have long been enamored with Lisa Su as a Chief Executive. Under Su's leadership, Advanced Micro Devices  has moved from the depths of where the firm was just four years ago to the point now where AMD is one of the real players in the space.

Fast forward to late 2019. Advanced Micro Devices is taking share from Intel (INTC) in the fight for the CPU inside your personal computer, as well as taking on Nvidia (NVDA) in the world of more highly specialized GPUs. Over the past few days, we have seen Wedbush analyst Matt Bryson increase his target price for these shares to $51.50 from $39, while reaffirming his Overweight rating. Bryson citing positive reviews for the latest Threadripper processors that in his opinion may keep AMD more than competitive in these markets.

Have you been to any brick and mortar consumer electronics retailer of late? I hang around retailers during the holidays. I'm weird like that. I look at prices, I count parking spaces, I check on the size of lines on registers. In short, I was the kid in Little League who kept the stats for the whole team. On a recent trip to my local Best Buy (BBY) , one thing I noticed, not just Threadripper, but the latest Ryzen chip are everywhere. You know that little sticker on your laptop, that tells you what version of Intel is inside? A lot of them don't say Intel anymore.

On Monday (Christmas Eve Eve), extremely highly rated analyst Mitch Steves of RBC Capital reiterated his Overweight rating on AMD, and increased his price target from $50 to an industry high $53. His reasoning? Improving business in both gaming and the data center.

In the third quarter, AMD posted earnings growth of 38% on revenue growth of 9%. In fact, since the recent bottom AMD revenue has grown quite dramatically over the past two quarters when looked at sequentially. The firm will report their fourth quarter in late January. Expectations are for EPS of $0.31 on revenue of $2.1 billion. That would be good for growth of 287% and 48%, respectively. The street looks toward 2020 as a full year of solid corporate execution from this firm. Perhaps earnings of $1.10 (+77%) on revenue of $8.51 billion (+26%).

The only problem I see, at least on the surface, is how far the shares have run. At a last sale of $45.46, the shares trade at 41 times next 12 months projected earnings. The firm is quite healthy. Operating margin approached 6%, the cash position outweighs total debt, a current ratio not just above 1, but above 2. What this all adds up to for me, a trader running with a full position with an unrealized profit of 69%, is that I must now make a decision. 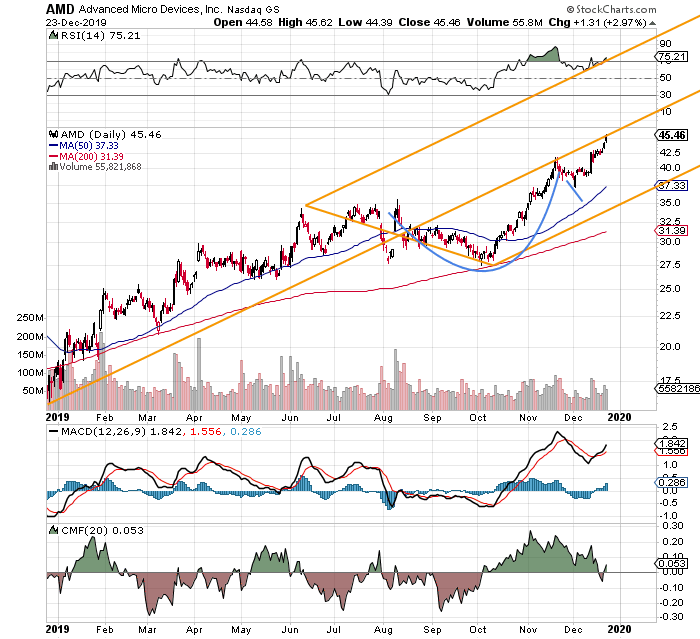 As readers will see, in this chart that I barely had to update, is that the cup with handle pattern in blue succeeded in providing a breakout, and that shares now test the central trend line of the Pitchfork for the second time in a month. Money Flow has ebbed. That's fine, especially when considering that the daily MACD is almost too strong, and Relative Strength sends an overbought signal. Mind you, that my most recent target price has been $44, and that was up from $42.

What I Am Going To Do

- Sell (write) either January 24th $40 or $41 puts (where ever I can get paid at least $0.50) to further reduce net basis, as well as force a profitable repurchase should the shares collapse within a month.

Get an email alert each time I write an article for Real Money. Click the "+Follow" next to my byline to this article.
TAGS: Investing | Stocks | Technical Analysis | Trading | Semiconductors & Semiconductor Equipment

The technical signals indicate a bit more aggressive buying of its shares of late.

Now Comes the Hard Job of Building on Wednesday's Bounce

The heavy selling pressure on certain areas of the market lifted, but generating more positive momentum will not be easy.