Adobe Inc (ADBE) released the firm's fiscal first quarter - the period ending March 4th - financial performance on Tuesday evening. Adobe posted adjusted EPS of $3.37 on revenue of $4.26B, a new record. On both the top and bottom line, Adobe did narrowly beat consensus view. The revenue number was good enough for year over year growth of 9%, but not good enough to extend a consecutive quarters streak of 20%+ revenue growth that ended at four. GAAP EPS came to $2.66, up a nickel from a year ago. Adobe has made adjustments to account for the extra week in the year ago comparable period, and to show growth rates in constant currency.

Remaining Performance Obligations (RPO) exiting the quarter were $13.83B, which was up 19% from one year ago.

Readers may have noticed that ADBE sold off a bit overnight. That had more to do with the firm's outlook than it did with the firm's performance. For the current quarter, Adobe expects to drive revenue of $4.34B, earning an adjusted $3.30 per share. Wall Street had been looking for adjusted EPS of $3.35 on revenue of $4.4B. The firm expects to see Digital Media add a rough $440M of new ARR, 13% Digital Media segment revenue growth, and 15% Digital Experience segment revenue growth.

Adobe announced back on March 4th the halt of all new sales of Adobe products and services in Russia and Belarus. As part of the above guidance, the firm reduced its estimate for Digital Media ARR by $75M to account for business lost in those two nations. In addition, while officially still doing business in Ukraine, the company also reduced its estimate for Digital Media ARR by another $12M in that country to account for business likely lost there due to the war. These actions combine for an expected reduction of $87M to total ARR for the quarter, resulting in a probable negative revenue impact of $75M for the fiscal year.

Looking at the balance sheet, Adobe ended the reporting period with a net cash position of $4.7B, which is down more than $1B in three months time. This accounted for most of the decline as current assets decreased to $7.476B. Current liabilities increased to $7.197B on an increase in net unearned revenue. This puts the current ratio at 1.04, which barely passes the Sarge test. The troubling thing here is that just three months ago, Adobe's current ratio stood at a much healthier 1.25.

Total assets decreased to $25.976B, still comfortably outweighing Total liabilities less equity that decreased to $12.201B. The drop in total liabilities was driven by a decrease in long-term debt (to Adobe's credit) from $4.123B to $3.626B. Plainly put... while I do not love a barely healthy looking current ratio, Adobe still has the cash to pay off its entire long-term debt load balance.

The firm remains a cash flow beast, producing free cash flow of $14.37 per share for the quarter reported. While slightly lower than the previous quarter, this number still dwarfs what ADBE could produce just a few years ago. Oh, I did notice something else I did not like... Adobe' tangible book value dropped into negative territory at quarter's end at $-1.61 per share. Adobe has run with a negative tangible book value before, so this is not so strange. I just thought that the firm was past that by now.

There have been a bevy of cuts being made to Adobe price targets since last night, but I don't see ratings changes. I have found 11 sell-side analysts who have opined on ADBE since Tuesday night who are also rated at five stars by TipRanks. There are eight "buy" or "buy equivalent" ratings and three "hold" or "hold equivalent" ratings. Two of the "holds" offer no price target. The average price target among the nine we have is $560.67 with a high of $600 (Gregg Moskowitz of Mizuho Securities) and a low of $525 (Philip Winslow of Credit Suisse who is the other "hold"). 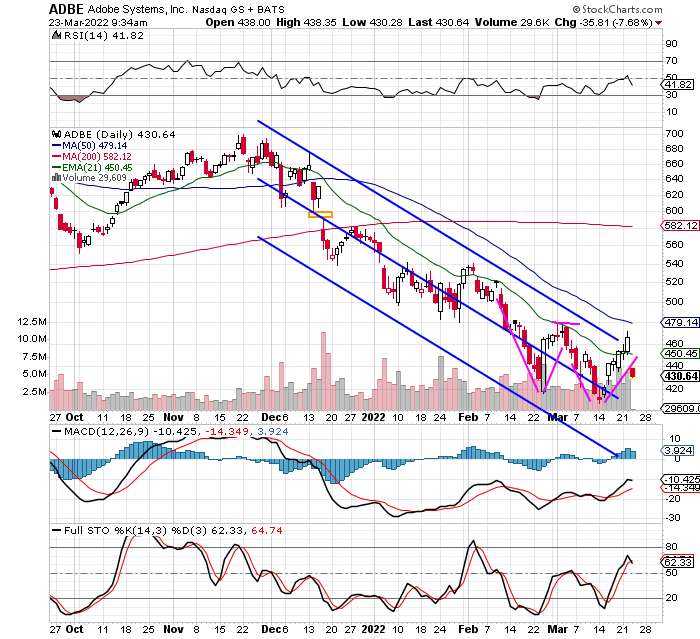 Readers can see that the stock has been mired in a downtrend since peaking last November. On the bright side, the shares had tried to break out from that down channel, and formed a double bottom pattern over the past month with a potential $479 pivot. Unfortunately after closing at $466.45 on Tuesday, the shares have been knocked back into the downward sloping channel overnight. This probably puts an end to any thought of continuing on with the stock's reversal.

Let's face it. The company has told you that the war in Europe is a problem. I don't love the fundamentals... not to mention the technicals. Even now, ADBE still trades at 33 times forward looking earnings. Hardly a value play. Nor a growth play. Yikes.

An interested trader could still sell $450 ADBE calls expiring this Friday for $2. Dangerous? It is. That's why the same trader might buy a like amount of $455 calls for less than a buck. Risk management.