Adobe Inc. (ADBE) was favored by Jim Cramer during the Lightning Round of his Mad Money program Tuesday night. The broad market turned weak in April and accelerated on the downside in May so let's double check the charts and indicators of ADBE before jumping in.

In this daily bar chart of ADBE, below, we can see a small double bottom pattern in November/December followed by a rally to a new high at the end of April/beginning of May. Prices weakened during May as the broad market suffered.

It looks like volume has diminished from December but the On-Balance-Volume (OBV) line shows a rising pattern and indicates that buyers of ADBE have been more aggressive than sellers overall the past five months.

The Moving Average Convergence Divergence (MACD) oscillator tells a different story as it has been weakening since the middle of February and is about to cross below the zero line to an outright sell signal.

In this weekly bar chart of ADBE, below, we see a mix of signals. Mathematically the trend is still up as prices are above the positively sloped 40-week moving average line. A weekly close below $255 will break the line however.

Weekly trading volume has declined this year and the weekly OBV line has not made a new high to confirm the new price highs in April.

The MACD oscillator has narrowed in recent weeks and is close to a bearish crossover - stronger prices would defer the signal.

In this Point and Figure chart of ADBE, below, we can see some distribution (selling) and a potential downside price target of $232. 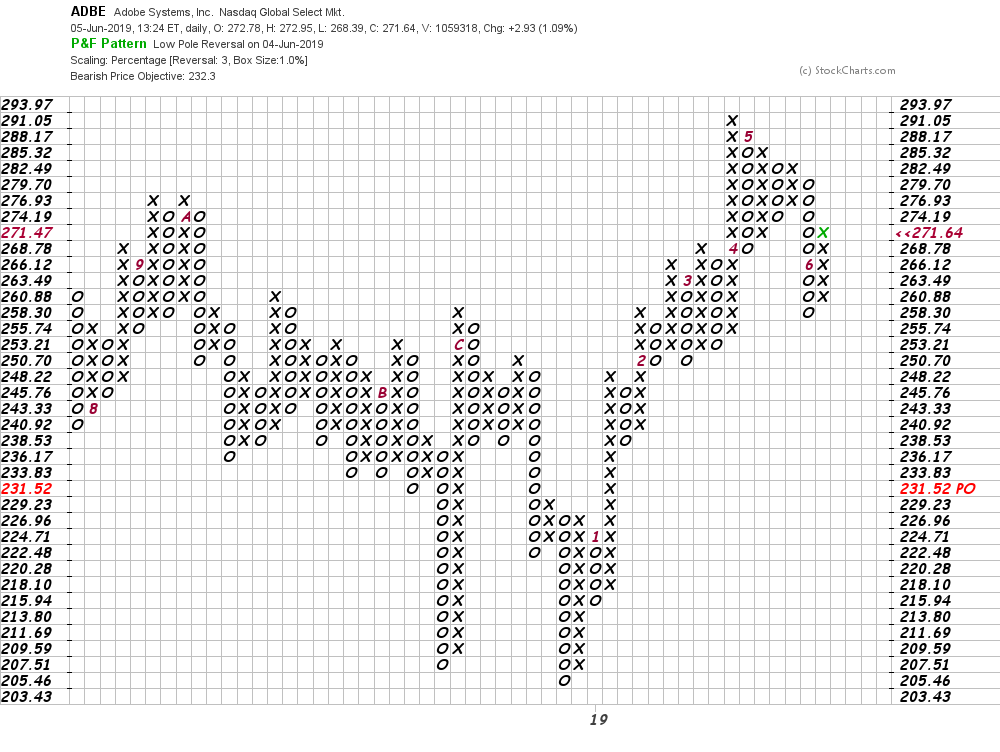 Bottom line strategy: Net net the indicators on ADBE are mixed though the trends on the bar charts are bullish. The sky is not falling but we do not want to start a habit of ignoring some indicators because they may tell us something we might not want to hear. Hold longs and risk a close below $259 for now.

Get an email alert each time I write an article for Real Money. Click the "+Follow" next to my byline to this article.
TAGS: Investing | Stocks | Technical Analysis | Trading | Software & Services | Mad Money

As Indexes Rise Amid Unrest, Investors Are Skeptical, Fear Missing Out

If this market is ever going to top, it seems likely it will have to occur on good news since no amount of bad news seems to matter.

Ciena Corp. May Keep You on Hold a Bit Before Rising Up

Let's check in on the charts of this telecommunications networking equipment company.

Jim Cramer: There Are a Handful of Oils I'd Own

A big cap dividend producer, a company with the best assets, two larger growth companies, and my favorite, Parsley Energy.