As I wade into the quarter reported by Adobe Systems (ADBE) , I'll just get this out there. I am long this name, have been for a long time. I am still up nicely from net basis. That said, I am down badly in the name since February. This name is a core position of my three pronged approach to surviving the negative impacts of the spreading coronavirus on the economy. This name is central to my "rebound" group, which is the smallest, and most volatile group that I have created to co-exist with my "virus" and ""revenue" groups. Though volatile, I have not fallen back on Adobe as a day-trading vehicle as I have with Amazon (AMZN) , also a member of that subset.Adobe for me remains an investment.

Investors may recall (you may have been distracted) that in early March, Adobe cancelled the annual Adobe Summit conference that was to be held in Las Vegas this March 29 through April 2. The event that attracted 16,000 attendees in 2019 will be held on-line only, and this adjustment has forced the firm to factor in an expense charge that will place an expected negative impact on Q2 earnings of seven cents per share.

Simply put, Adobe Systems reported another great quarter for the first quarter, which ended February 28th, so there is some impact from the Covid-19 virus. For the quarter, the firm reported adjusted EPS of $2.27, which was a beat and growth of 33%. Revenue printed at $3.09 billion (first quarter ever above $3 billion). That was also a beat, and good enough for growth of 18.8%. This growth, while a deceleration from the pace of recent years is still quite robust and quite possibly very understandable.

The inside numbers remain impressive in my admittedly biased opinion. The Digital Media segment contributed sales of $2.17 billion (+22%), while the Digital Experience business provided revenue of $858 million (+15%). As for ARR (Annual Recurring Revenue), or subscription based sales (annualized)... Digital Media grew 23% to $8.73 billion, Creative grew 22% to $7.58 billion, and Document Cloud grew 34% to $1.15 billion. On these numbers, CFO John Murphy said on Thursday, "Our recurring revenue model and the real-time visibility we have into our business uniquely positions Adobe to manage through an uncertain environment."

For the second quarter, given this model, the firm is able to make an estimate for guidance, which is something now scarce across a number of industries. The firm now looks for sales of $3.175 billion (the street is at $3.22 billion) that produces adjusted EPS of $2.35, which is still above consensus expectations of $2.33.

Taken from the firm's press release... these numbers "factor the expected impact of the global uncertainty caused by the Covid-19 situation based on the latest data and information available." The firm does expect to see delays in booking decisions, and a clientele that spends less on marketing and consultation. The firm also sees the potential for reduced software licensing revenue as customers are impacted.

The shares sold off hard going into the numbers and sold off further in after-hours after the release. I found that a little tough, as I find the guidance, honestly, very reassuring. I really felt relief when I saw the outlook for Q2. Yes, the shares opened higher on Friday morning. How much of that is the market itself, I do not know yet. 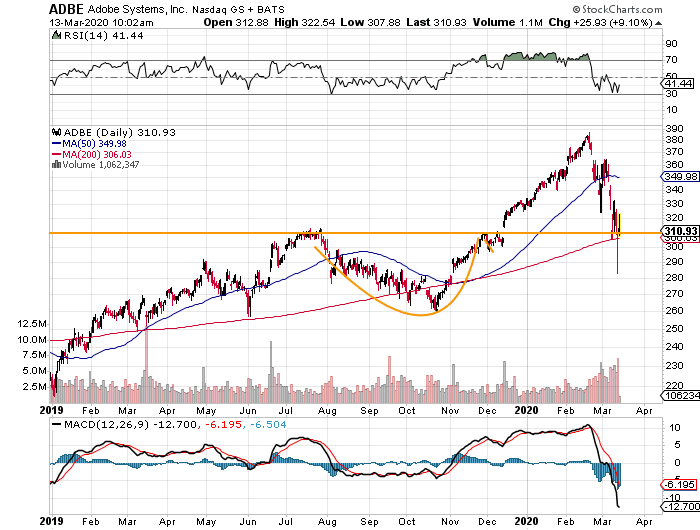 Readers will note that shares of ADBE have regained the 200 day SMA at $306, as well as the old pivot at $310 that had provoked the entire December through February breakout. While I think holding both of these lines would be important, at this point, given the broad market volatility, I will place more importance on the 200 day line.

I am not adding, nor am I reducing today. That said, my target price will be $370, or close to a 20% move from pivot, but and this is a big but... should the shares fail to hold $306, then I would expect a technical re-test of Thursday's low price of $283, and I will sell something on that break.

Get an email alert each time I write an article for Real Money. Click the "+Follow" next to my byline to this article.
TAGS: Earnings | Investing | Stocks | Technical Analysis | Trading | Software & Services | Technology | Coronavirus

Here Are My 7 Takeaways Heading into Q2

It's still not a stock picker's market, but have a list of names ready to perform amid the coronavirus crisis.

A retest of the March lows could develop in the next couple of weeks, so be patient and careful with LHX.