Retail has not been a fun ride this earnings season. We've moved past disappointment to utter disaster for many names. We can add Foot Locker (FL) to the latest list of casualties with shares trading down 16% in early Friday afternoon trade. The company missed the bottom line by nine cents when it reported earnings of $1.53 per share on revenue of $2.08 billion. While the company reiterated full-year guidance, it now expects high-single-digit EPS growth based on share repurchase activity.

Despite the huge move today, the option's market is still pricing another 8% movement in shares over the next three weeks. And it is not like Foot Locker is a stranger to big moves the first day of trading post-earnings. The stock has closed with a move greater than 9% eight of the past nine earnings reports. That takes us all the way back to the start of 2017. The idea of another 8% on top of the first day's move though is a much rarer feat when examining the following three weeks, which would take us to the June 14, 2019, expiration. Foot Locker shares haven't accomplished this since November 2016. They came close in March 2018, but the bulk of the move is in the first day. I'm a little surprised to see the aggressive pricing remain in the options market. If that doesn't come down before the end of trading today, then a short volatility play may be worthy of consideration. 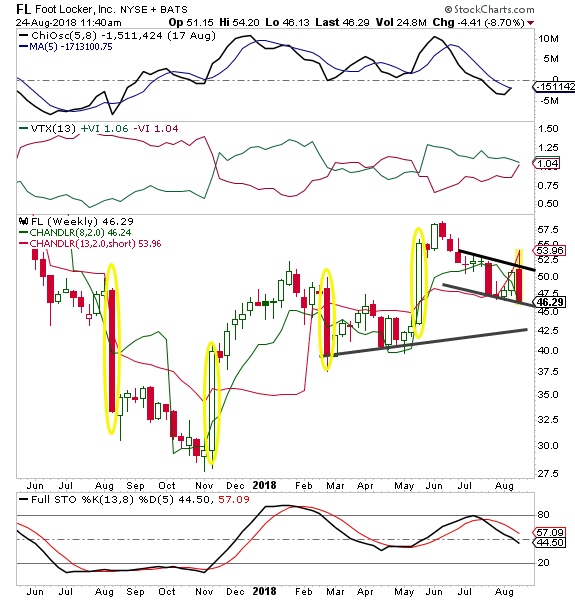 Finding support may be difficult. That might explain the current option pricing. I have to go back to the big November 2017 move, and subsequent breakout, to identify support. That leads to another interesting possibility. Note the huge drop in August 17th, it is similar to the current drop in price. After a small bounce, Foot Locker shares struggled for three solid months. It wasn't until the earnings report of November reversed the trend that Foot Locker found any buyers. A repetition or even rhyme of that pattern would push shares into the $35-$40 range.

There's little in the report or technical picture that makes me want to rush into FL. The company will likely continue to buyback shares, but after only spending $1.8 million to buy 32,100 at an average price of $56.07 (not a great return on those dollars so far), I don't anticipate future buybacks to help rally shares. This is a $6 billion market cap company, so until we see a "real" amount of money going into buybacks, it's a non-factor. A dividend approaching 3% will make this an intriguing buy-write consideration under $40, but until we see that price tag the best bet is to let someone else be the bullish hero of this story.

Get an email alert each time I write an article for Real Money. Click the "+Follow" next to my byline to this article.
TAGS: Earnings | Economy | Investing | Markets | Stocks | Technical Analysis | Trading | Retail | Stock of the Day