If anything, Uber Technologies (UBER) has shown throughout this pandemic an ability to adapt to changing environments. From an evolving focus on what businesses are working to sharp execution in cost controls (Saved over $1 billion in fixed expenses last year.), this is one reopening play that has managed to stay "in the game" throughout the pandemic. I will tell you flat out that I had always preferred an actual taxi cab to an Uber, and a year ago, I never would have expected to use Uber Eats in order to "eat out" while remaining in. The pandemic changed all of that. I would definitely refer to my family as heavy users of the Uber Eats app.

The first inkling of some kind of notable improvement came back in mid-March when chief ride-sharing rival Lyft (LYFT) announced that volumes were hitting post-pandemic records. The next shoe to drop (so to say) came on April Fools' Day when five star (at TipRanks) analyst Brent Thill at Jefferies initiated coverage of Uber Technologies with a "Buy" rating and a $75 price target. Thill wrote at the time that UBER is "ideally positioned" for accelerating growth and to reach profitability as vaccines roll out. Hmm. Hold on to that thought as we proceed. Finally, Thill christened UBER as a top reopening play.

Just an FYI. Since Thill made his move, at least three other five star analysts have either initiated or reiterated "Buy" ratings on UBER with price targets in the mid $70's.

Monday Morning. April 12th. Uber Technologies announces that gross bookings for the month of March increased to a record highest monthly level in the 12 year history of the firm. Mobility, which is really the ride sharing business, posted a 9% month over month increase in gross bookings, passing a $30 billion annualized run rate. Meanwhile the Delivery business, which is mostly Uber Eats, crossed $52 billion in an annualized gross bookings run rate for March, up 150% on the year. This business has become indispensable to families trying to keep people safe.

Incredibly, Uber has now said that demand for the ride hailing service is recovering faster than driver availability, while demand for meal delivery continues to exceed courier availability. The company also says that it is now on track to reach profitability in quarterly EBITDA later his year. The firm has already stated the intention to invest $250 million in incentives in order to get more drivers back on the roads.

In other news, but news that can not be ignored, the firm expects to record a "significant accrual" in its Q1 financial data due to the recording of historical claims relative to a settlement process in the United Kingdom after the UK's top court in February ruled that Uber drivers be reclassified as "workers" thus entitling them to a minimum wage and other employee type benefits common to that nation. The majority of this accrual is expected to hit revenue in the Mobility unit as well as overall, but will be excluded from adjusted EBITDA results. So, I guess we're talking about "adjusted" EBITDA profitability? Perhaps not. I still think there is money to be made here. 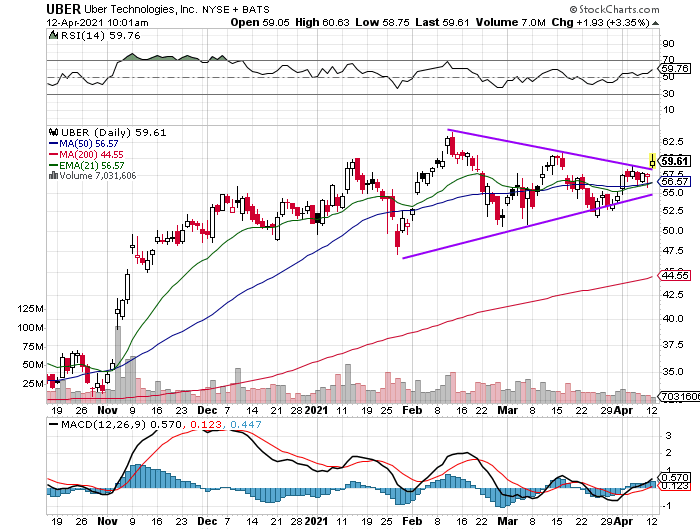 At first glance, I thought I was looking at a basing period of consolidation that starts at least on the sporty side in December. Then I realized that the basing period ends in early January as what you see outlined in purple, which is a pennant pattern, develops. These "pennants'', which are really just a rather neutral series of lower highs that correlate to a series of higher lows, tend to end in a violent move that can honestly be in either direction. Is this morning's explosive move the beginning of such action?

Could be. Earnings are due after the closing bell on Wednesday, May 5th. Could investors see a nice three week plus run into the numbers? If they do, I would get flat a long position ahead of the digits. Not fortune telling, just risk management.

Note 1: Equity ownership is capped at $65 through May 7th. If called away, the trade bears a 14.5% profit for about three weeks' work.

Note 3: The series used in this example can be illiquid. Traders will have to use some finesse to get the "right" price. No market orders.

Get an email alert each time I write an article for Real Money. Click the "+Follow" next to my byline to this article.
TAGS: Economy | Investing | Options | Stocks | Technical Analysis | Trading | Transportation | Analyst Actions | Earnings Preview