Activision Blizzard (ATVI) reported the firm's third quarter financial performance on Tuesday evening. The numbers did not "wow" anyone. That, unfortunately, is not where our story begins. This past August, Blizzard President J. Allen Brack left the firm following waves of negative headlines. The California Department of Fair Employment and Housing filed a civil action suit in July alleging that the company had fostered a pervasive "frat boy" workplace culture. The company was also subpoenaed by the Securities and Exchange Commission concerning workplace issues.

Earlier this month, Activision announced that 20 employees had been fired and another 20 had been disciplined following a settlement with the Equal Employment Opportunity Commission. On top of that.... Brack had been replaced in August by Jen Oneal and Mike Ybarra who would be co-leaders of Blizzard. Along with the numbers and a couple of key delays that we haven't even gotten into yet, the firm had to announce that Jen Oneal was already planning to leave the firm, leaving Mike Ybarra to run Blizzard. Investors have to wonder, are the workplace issues really behind them? How on earth can the public possibly know? Let's get into the rest of this story.

Activision Blizzard posted adjusted EPS of $0.72 and GAAP EPS of $0.82. By both metrics, earnings did beat Wall Street. Net Bookings amounted to $1.88 billion, just meeting expectations. Third quarter monthly active users decreased from 408 million for the second quarter to 390 million for this reporting period. Activision and King Digital both experienced significant reductions while Blizzard seems to have retained it's number.

More important to investors than the mediocre financial performance was the fact that the firm had to confirm on the conference call that two highly anticipated video games... Overwatch 2, and Diablo IV would not only miss this holiday season, but the fact that neither game should be counted on to contribute meaningfully until 2023. What does that mean? Has there been turnover at positions so key to getting these games finished that they might miss two holiday seasons?

Looking ahead, the firm sees adjusted Q4 sales running at $2.78 billion and the full year totaling $8.65 billion. We have heard from a number of sell-side analysts, mostly negatively this morning. I only see four that are rated at five stars by TipRanks. Two "Holds" and two "Buys". One key name would be Morgan Stanley's Brian Nowak (one of the holds), who downgraded ATVI from "Overweight" to "Equal Weight" and his price target from $120 to $65. Nowak said that he was not going all the way to "Underweight" (or "Sell") because the firm still has substantial game franchise value. The average price target of these four is $81.75. Nowak is the low, while Brian Fitzgerald of Wells Fargo is the high at $105.

The balance sheet is quite strong, and has been for some time. This has not changed in 2021. Current assets dwarf current liabilities and total assets dwarf total liabilities less equity. There has been no increased reliance upon either goodwill or long-term debt. Uh, just an idea, they may want to reduce that entry for goodwill. Not sure the brand is quite what it was. 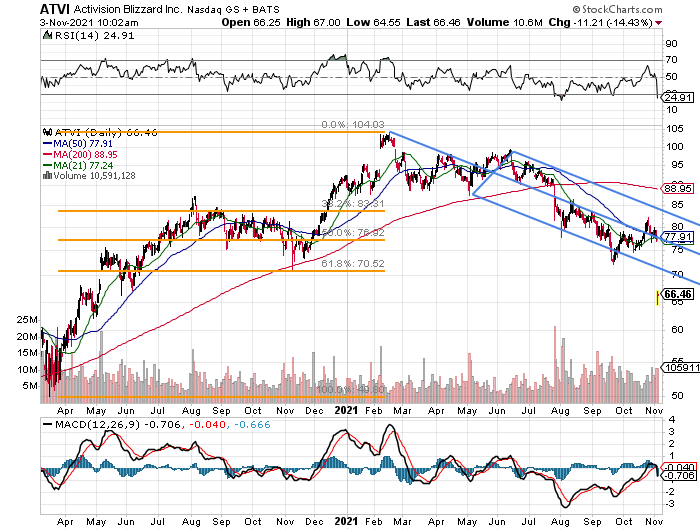 Readers will see that on Wednesday, ATVI opened well below a 61.8% Fibonacci retracement of the entire March 2020 through February 2021 rally, and well below the lower trend line of the downward sloping Pitchfork model that had been in place ever since.

Buy the dip? The stock is broken, at least for now. Dip buyers may want to give this one the "three day rule"... and others may want to wait to see if the firm really can get their act together. Have no doubt, Activision Blizzard will be back, and will probably be a better company and healthier stock when they do. I just don't know if I am ready to go there just yet. The balance sheet alone will sustain the firm through whatever it still has to go through. If these two games can be ready by late 2022, this could be one heck of a stock.

Need to have skin in the game? If you do buy the shares here at $67, you might want to write $70 May calls against the position for a rough $5.25. Get called away in May? That's a 13% net profit. Have the shares cave in at some point even worse than they are today? At least you'll have a net basis of $61.75. For me, this is a hard pass for now.

Get an email alert each time I write an article for Real Money. Click the "+Follow" next to my byline to this article.
TAGS: Earnings | Investing | Stocks | Technical Analysis | Trading | Gaming