The cloud, technology and cybersecurity stocks continue to surge and this past week we learned why, Jim Cramer told viewers of Mad Money Thursday night -- it was because Accenture (ACN) gave us an update on exactly what's happening in the enterprise technology world.

When Accenture reported their earnings, they confirmed that the pandemic has forced companies to accelerate their digital transformation plans and migrate to the cloud even faster than before. Cramer said we could be seeing three to five years of change happening in just a few months' time.

Accenture saw strength across the board. The company called the past few months the biggest change in human behavior they've ever seen, forever changing how companies engage with their customers and employees.

Let's check out the charts and indicators of ACN.

In this daily bar chart of ACN, below, we can see how prices declined from February to March as the impact of Covid-19 impacted the stock market. ACN bottomed in March and then rallied back into July. There have been a number of pullbacks/corrections along the way higher but none of them have interrupted the pattern of higher lows and higher highs.

The trading volume has been active since March and the On-Balance-Volume (OBV) line has bottomed out in April and May. A rising OBV line tells us that buyers of ACN have been more aggressive and that helps to confirm the rally.

The Moving Average Convergence Divergence (MACD) oscillator crossed the zero line by late April for a buy signal and it is now turning upwards for another buy signal.

In this weekly bar chart of ACN, below, we can see that the February/March decline was deep but it did not break the late 2018 low and with the recent new highs the longer-term uptrend continues. Prices are above the rising 40-week moving average line.

The weekly OBV line is rising but has not yet made a new high. The weekly MACD oscillator has given us an outright buy signal. 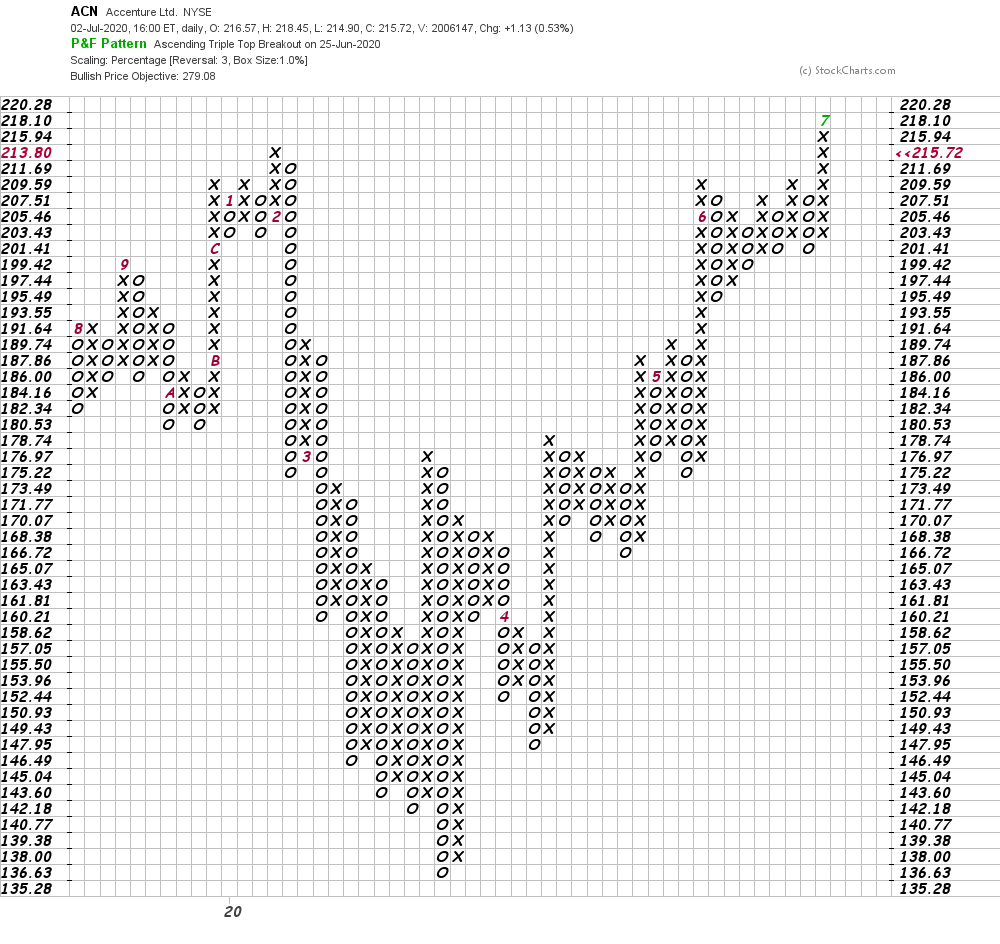 Bottom line strategy: ACN is in an uptrend on all three of these charts (above). Traders could go long ACN at current levels risking a close below $205 for now. The $279 area is our price target.

Get an email alert each time I write an article for Real Money. Click the "+Follow" next to my byline to this article.
TAGS: Economy | Investing | Stocks | Technical Analysis | Trading | Commercial & Professional Services | Cybersecurity | Software & Services | Technology | Mad Money