We have not reviewed the charts of Acadia Pharmaceuticals (ACAD)  since Aug. 9, 2017. Way back then we wrote that "ACAD looks strong enough for a rally to the upper $30s but a close above $40 will be more impressive. Trade ACAD from the long side with a reasonable stop. A breakout above $40 could mean a longer-term rally into the $50s."

Prices eventually reached the $50's but 2018 saw a hard decline to new lows. Now the picture is much, much different.

Let's check out some updated price charts.
In this daily bar chart of ACAD, below, we see a bearish picture with a number of downside price gaps. Prices plunged sharply lower in early March and again today. We can see a bearish dead or death cross in the middle of March as the declining 50-day moving average line moved below the declining 200-day moving average line.
The On-Balance-Volume (OBV) line has been weak since late December and tells us that sellers of ACAD have been more aggressive with heavier volume being traded on days when ACAD has closed lower. The Moving Average Convergence Divergence (MACD) oscillator is in a bearish alignment below the zero-line.

In this weekly bar chart of ACAD, below, we can see that prices have made a large double or triple top over the past 19 months or so. Prices have plunged below the now declining 40-week moving average line. The weekly OBV line has been in a slow decline the past 12 months and the MACD oscillator gave a sell-signal last month, when it fell below the zero-line.

In this daily Point and Figure chart of ACAD, below, we can see a potential downside price target in the $16 area. 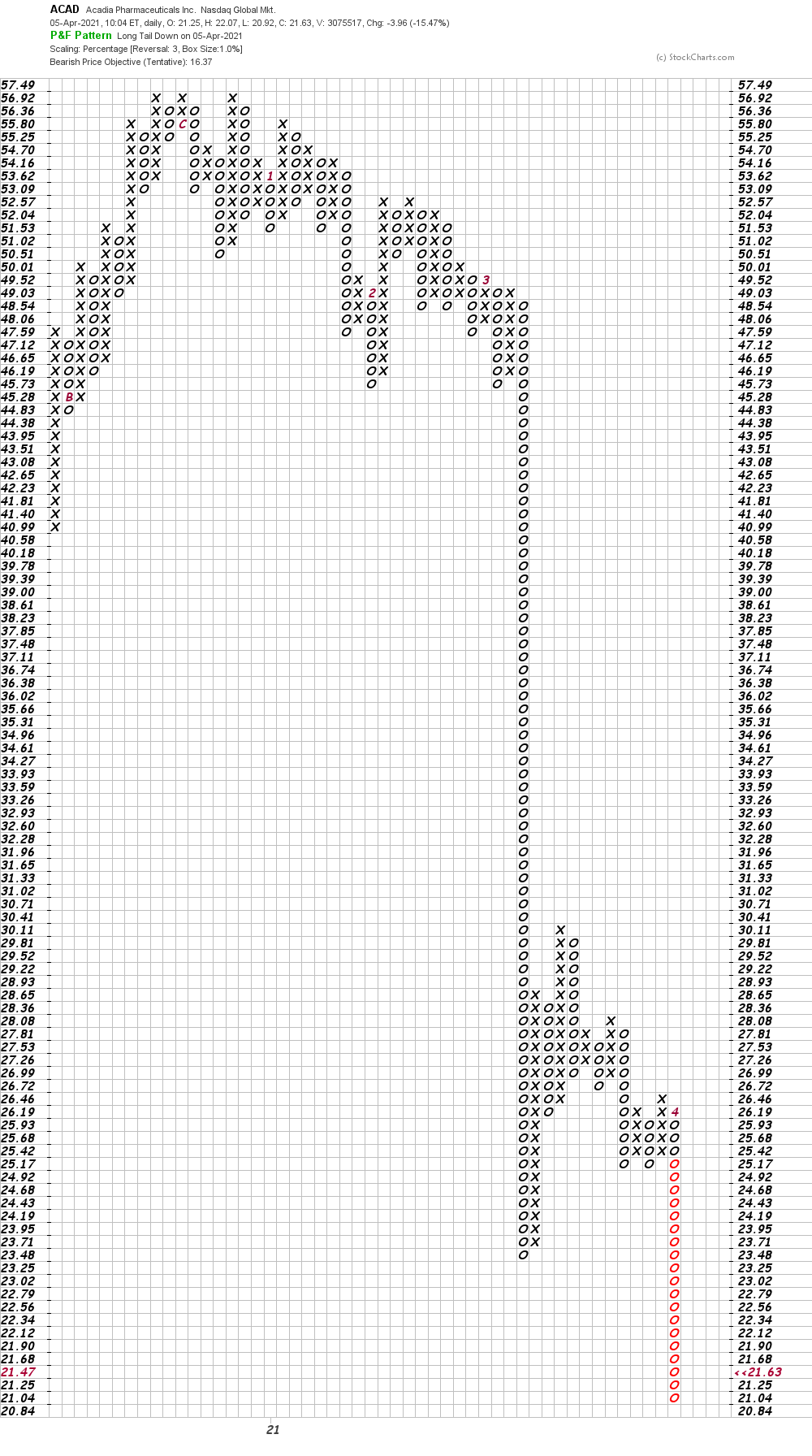 Bottom line strategy: It is not important where ACAD declines to the $16 area as suggested by the Point and Figure chart. It is not important if ACAD makes an oversold bounce. The important thing to remember is that ACAD is going to need a long repair process in the months ahead. Avoid.
Get an email alert each time I write an article for Real Money. Click the "+Follow" next to my byline to this article.
TAGS: Investing | Technical Analysis | Pharmaceuticals