AbbVie (ABBV) is the Stock of the Day at Real Money as they announced a blockbuster $63 billion takeover of Allergan (AGN) . In pre-market trading ABBV was indicated around $73 which is lower than Monday's close and could become a new low close for the move down. Let's look closer at the charts and indicators of ABBV.

In this daily bar chart of ABBV, below, we can see the price action through Monday's close. The trend since August has been down with the slope of the 200-day moving average line being negative for most of the past year and the 50-day average line also currently pointed down.

The daily On-Balance-Volume (OBV) line shows a rise from early November to late April followed by a sideways trend. A rising OBV line suggests that buyers of ABBV have been more aggressive but in a downtrend that is not necessary as traders and investors can easily purchase shares as the fall.

The Moving Average Convergence Divergence (MACD) oscillator has spent much of the past 12 months below the zero line.

In this weekly bar chart of ABBV, below, we see a pretty negative picture. Prices are below the negative 40-week moving average line.

The weekly OBV line shows a long decline before some recent sideways activity. The MACD oscillator has been bearish since last summer.

In this Point and Figure chart of ABBV, below, we can imagine that there will be a column of "O's" drawn in down to below $73.73 when the stock opens for trading. A downside price target of $67.68 is indicated. 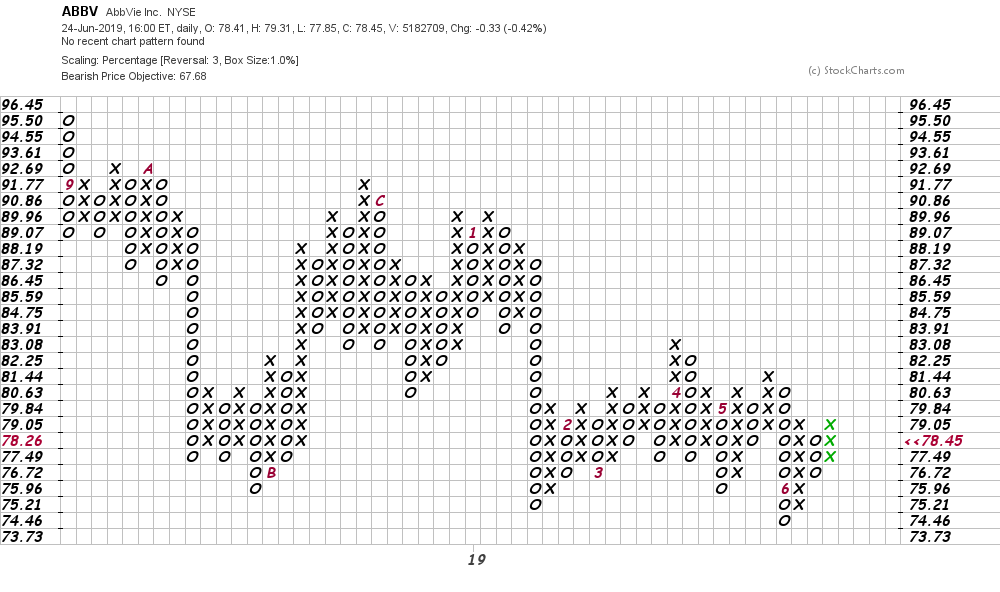 Bottom line strategy: It is above my pay grade to know whether a deal is fundamentally attractive to both parties and makes good long-term sense, but right now it looks like ABBV will continue its bearish trend.

Get an email alert each time I write an article for Real Money. Click the "+Follow" next to my byline to this article.
TAGS: Mergers and Acquisitions | Investing | Markets | Stocks | Technical Analysis | Healthcare | Pharmaceuticals | Stock of the Day

As the Political Battle Intensifies, 'Sell the News' Conditions Develop

The biggest positive that's going on right now is that there continues to be a focus on individual stocks.

Plus, a quick look at Southwest Airlines and why it remains the one airline to own.

Here's How Your Portfolio Should Look If You Followed My Advice

Remember back in March when I told you not to cower away from great opportunities -- this column shows how you had to be 'in' to profit and where to go from here.

The market keeps rallying on the possibility of a deal, despite the hurdles.