During Friday's "Mad Money" program, Jim Cramer gave viewers his game plan for this week. On Wednesday, we'll hear from the Federal Reserve, but Cramer wasn't expecting any changes. The earnings continue with Boeing  (BA)  and Abbott Labs (ABT)  two stocks that are still early in their rallies. After the close, it's a trifecta of tech darlings, Facebook (FB) , Apple (AAPL) and Tesla  (TSLA) .

Let's check out the charts of ABT first.
In this daily bar chart of ABT, below, we can see that prices are very close to breaking above the highs of August and November. ABT is trading above the rising 50-day moving average line and the rising 200-day moving average line. The trading volume has remained steady the past five months instead of diminishing and that I consider a positive sign. The On-Balance-Volume (OBV) line has been moving up since early December and is close to making a new high. The Moving Average Convergence Divergence (MACD) oscillator gave us an outright buy signal earlier this month when it crossed above the zero-line.

In this weekly bar chart of ABT, below, we see a constructive picture. Prices are in an uptrend above the rising 40-week moving average line. The weekly OBV line has been moving up since early December and is close to making a new high. The MACD oscillator showed weakness from November but has recently narrowed and is close to an upside crossover and buy signal.

In this daily Point and Figure chart of ABT, below, we can see that prices just made an upside breakout at $115.37 and a $125 price target is being projected. 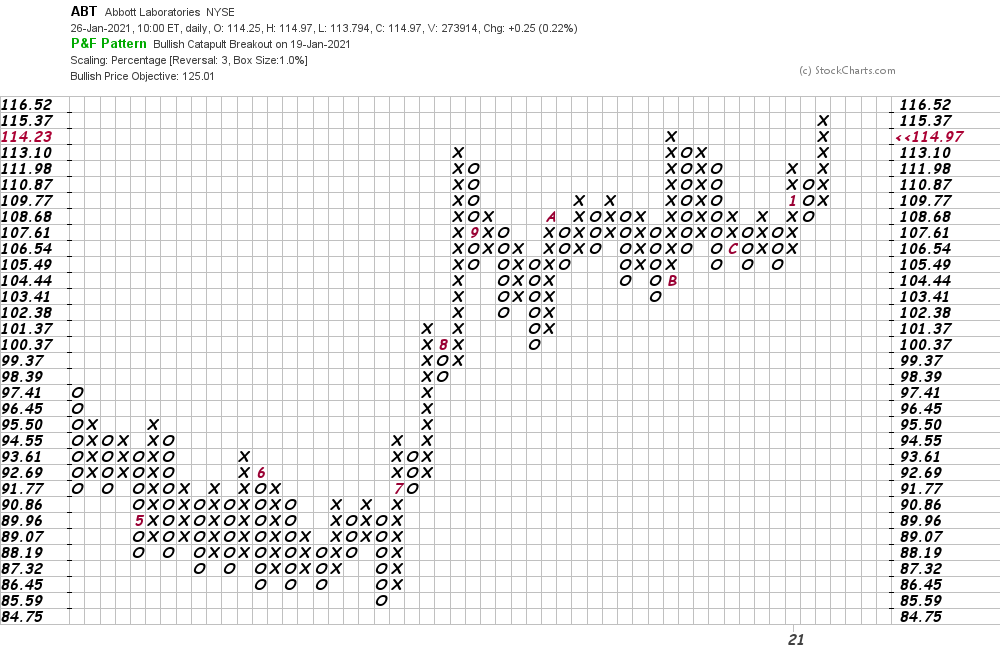 Bottom line strategy: ABT has made an upside breakout on the daily Point and Figure chart (above). Traders could use available weakness to go long. Risk a decline to $107. The $125 area is our first price objective.
Get an email alert each time I write an article for Real Money. Click the "+Follow" next to my byline to this article.
TAGS: Investing | Technical Analysis | Pharmaceuticals | Mad Money