Last day of 2020. A mix of joy, relief, and anxiety. We're putting an emotionally challenging year in the rearview mirror, but what happens on January 1? Look, Covid isn't going to magically disappear because it is 2021. Any bad habits you developed in 2020, won't disappear. It's just another day. Time takes...well, time. The mental reset should provide a temporary boost for some, so use it while you have it.

I never wish away years, no matter how bad. In the portfolio of life, we're all short time. That being said I did get a nice end of the year treat talking with my pops last night. For the first time since December 5th, he sounded like himself.

The S&P 500 is going out on highs. The index has been steadily climbing higher since the late October dip. The 21-week simple moving average (SMA) has operated as strong support. Initial support has been consistently found in the 10-week SMA. The area of caution is the heated Full Stochastics. The index has struggled when it has crosses bearishly. We're close to that right here. If we are going to get a trigger, it won't happen until the first or second week in January. Fortunately, the 10-week SMA has been the downside test. That sits around $359 (and climbing) this week, so if we're talking pullback, we're looking at 3% to 3.5%.

The outlook remains bullish longer-term but I'm looking for a pullback in mid-to-late January of 3% to 4%.

I opted not to add the Nasdaq as it is a redundant view of the SPY right now. 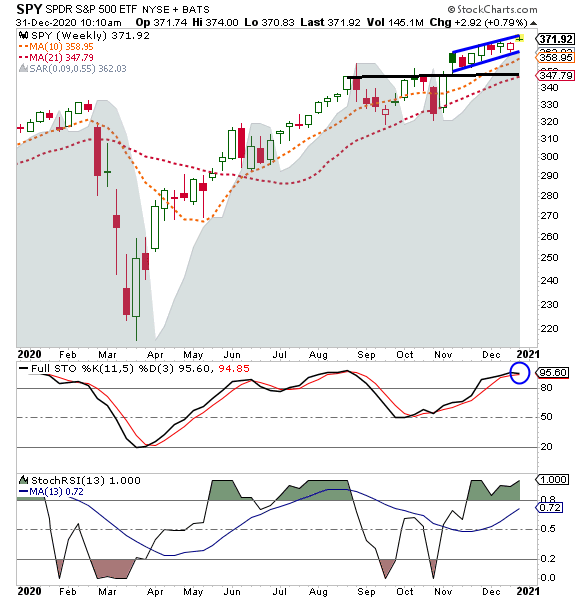 We're seeing rotation this week from small names to larger names. That sets up a risk for small-caps heading into early 2021. We're already seeing the bearish crossover in the Full Stochastics and StochRSI. Again, these have been stalwarts to moves higher. The pattern on IWM is slightly more concerning as it resembles a rising wedge more than a rising channels. Those tend to slant bearish, so I would watch IWM closely. Should we close below the low of last week then I would anticipate a test of $181.50. That would be a pullback about twice the size of the SPY. 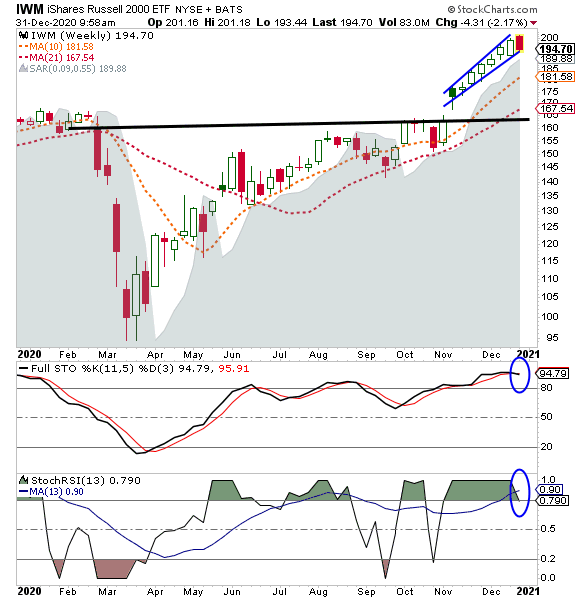 Could the start of 2021 be exactly what GLD needs to break free from this long, slow decline off the August top? With shares stuck between the 10-week SMA and 21-week SMA plus a pattern that could either be either bullish or bearish, we'll know a lot quickly.

I know the bullish/bearish pattern sounds like hedging language but look closer. The current trend has been lower since August. The recent bounce could be nothing more than a bearish flag within that pattern. On the flip side, the pullback since August could be a consolidation of the move higher in the first half of 2020.

With that in mind, I think a close over $178.50 puts us clearly in the bull camp, especially when you combine the bullish crossovers in the Full Stochastics and StochRSI. That's where I sit. No hedging. I think we're headed back to $185 in January and will retest highs during the first quarter. 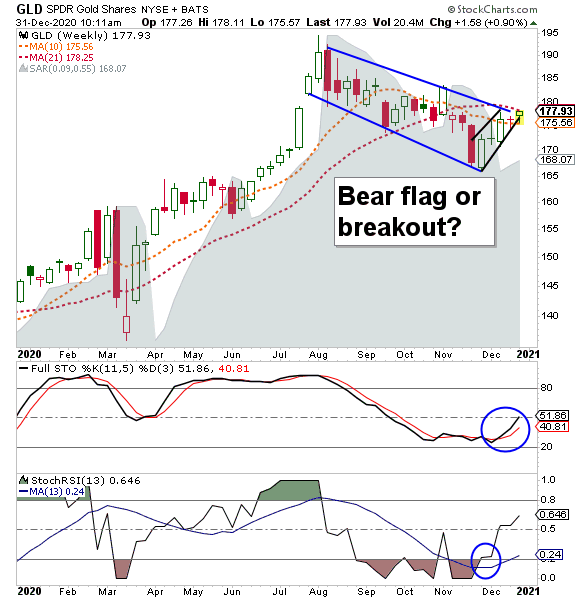 How could I not mention Bitcoin? The momentum train has been rolling! For the better part of three months, bulls have barely rested. We've been running along the upper edge of the Bollinger Band (20, 2.5) for the better part of three months as well. This is a major change of character from the first three quarter of 2020. Can that continue? I think it is a bit much to ask. I suspect we'll retest the $24,000 to $25,000 in the first quarter, but until we break support, there's no reason to expect buyers to completely take their foot off the gas. 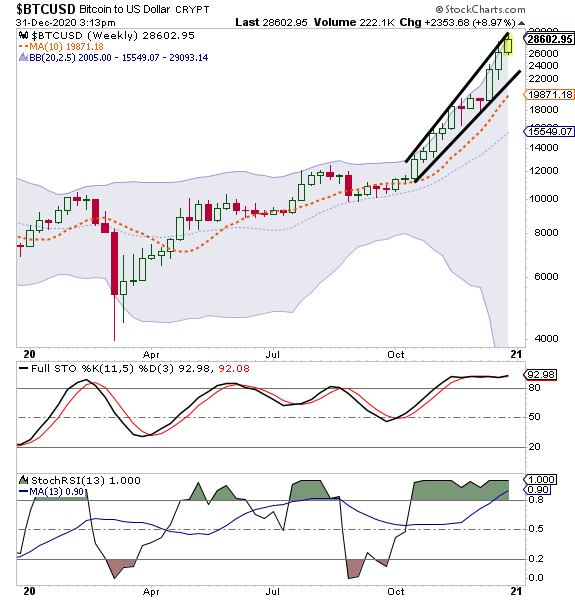 While it's not a half-day (it should be), I don't expect I'll do much this afternoon. I want to take this opportunity to thank everyone for their continued support and readership. Here's wishing you all a safe and happy New Year's.

Get an email alert each time I write an article for Real Money. Click the "+Follow" next to my byline to this article.
TAGS: Economy | Gold | Investing | Markets | Stocks | Technical Analysis | Trading | Cryptocurrency