Just five days. Seemed longer. What began with two days of increased institutional (almost panicked) selling, ended with three days of upside momentum on volume high enough to consider serious. What could change the character of a marketplace midweek like that? Remember that Tuesday "island" that we wrote last week, potentially signaling movement to the upside? You know what they say... never screw with tried and true tendencies. On that note, we are a long way from calling Friday's action island-like, but the day's candle does preset as a gap higher from Thursday for both the S&P 500 as well as the Nasdaq Composite. Just one more thing to keep an eye on.

So, what did we learn? We learned that financial markets remain highly sensitive to trade headlines. No kidding. Not just between the U.S. and China, though that obviously remains the main attraction, but basically any trade headlines with any other sovereign will move markets. Argentina, Brazil, France, you name it. We learned that financial markets either do not think President Trump will be impeached or that the impeachment will amount to very little in terms of consequence. We learned markets generally like anything that potentially squeezes the supply side in energy markets, though we've also known that since forever. Oh, and we learned that markets love strong labor markets. Keeping U.S. consumers healthy beats out all other macro as perhaps it should.

Fourth quarter earnings still lie well to our front, as the holidays draw near. That in no way means you get to glide through the coming week. The week to your front stands fraught with peril in a way that few can. All cognizant beings remain keenly aware that this coming Sunday is December 15th, and that this date is the one all have pointed to for months now. Will President Trump's administration move ahead with plans to turn up the heat on China in such a way that U.S. consumers for the first time share some of that pain? Will the administration roll back some tariffs instead in order to make possible the much ballyhooed Phase One Trade deal? Maybe, there will just be a cessation of increased trade hostilities... an extended "trade truce"?

Does the November strength in U.S. labor markets seen on Friday help with U.S. leverage? Does a fourth consecutive month of decline in November for Chinese exporters do the same? These factors should, but one thing we have also learned by now, is that these guys are no "easy out." Throwing pure heat won't do it. Have to hit the corners, and work the count. We'll know more on this shortly. Until then, we'll just have to discuss, the Fed (Fortunately, there'll be a dot plot to mock this week.), the ECB, the election in the UK, and some fairly high level domestic U.S. macro-economic data such as CPI and Retail Sales.

Though negotiations between the administrations of Presidents Trump and Xi are indeed paramount to perceived potential for U.S., Chinese, and global economic growth, prospects for this growth is translated throughout the marketplace as the spread between short-term and long-term interest rates. That's what portfolio managers key on, and that being understood by the many, is what algorithms written for high speed traders that higher technical analysts to read charts for them focus on as well. As we have discussed on multitudes of occasions, the most highly focused upon spread is that of the yields between the 3 month T-Bill and the 10 Year Treasury Note.

This spread is well known as our market's most accurate predictor of economic contraction, but this spread is indeed more than that. This is also where algorithms controlling broad equity prices of even gold futures get their signal. Take a look at this...

Here, well illustrated for you, is the correlation of the 3 month/10 year yield spread (31 basis points) and the S&P 500 (3145) over the past six months. This is practically the same darned chart. Where does the money go when the spread narrows and the algos pull back on equity market exposure? Safe haven. All of this dough doesn't end up in gold, but for the purpose of educating the masses, this is the same six month chart of the 3 mo/10 yr spread versus continuous contracts for gold futures.

Clearly a mirror reflection in terms of performance. What does this mean for the retail investor who feels overwhelmed simply trying to defend themselves against multi-directional avenues of attack? Take it from your old pal. All threats from all directions can be boiled down to the slope of the yield curve. Can it really be that simple? Short answer? Yes. All of you who have made it this far can learn this stuff. We probably could not do your job without going through some kind of a learning curve experience either.

The Financial Times reported on Sunday afternoon that Beijing had ordered all government offices to remove foreign computer equipment and software over the next three years. Does this signal a further decoupling of the world's two largest economies? Well, this can certainly be seen as an effort made to ignite domestic Chinese demand at the least, and a response to the barriers placed by Washington between Chinese telecom giant Huawei and U.S. companies that sell that firm technological equipment.

Bottom line here is that Chinese purveyors of software have much smaller ecosystems than do some of their U.S. counterparts. Replacing the likes of Microsoft (MSFT) or Apple (AAPL) in terms of globally compatible operating systems would not be easy, hence the three year window. Decoupling. Perhaps that's the watchword moving forward. Now, for the algos to pick up on it.

Blame It On Rio

The Bank of International Settlements, the BIS for short, also known as the central bank for central banks released over the weekend as they do four times a year, their quarterly assessment of the health of global financial markets. What was different this time was that the BIS tried to explain the shortage overnight liquidity in cash markets that took the planet by surprise in September, and really has not abated all that much despite the Federal Reserves aggressiveness in addressing the problem.

Of course, these markets are quite complex, so we are going to simplify here just to make sure everyone at least "gets" what the BIS thinks is going on. First off, overnight repo markets are dominated by four large banks. These banks in rough numbers, in the current environment, hold about 25% of all reserves in the U.S. banking system, and 50% of U.S. Treasuries. This imbalance results in simply less cash available to these repo markets. At the same, time, what are being referred to as "non-financial" type firms (or hedge funds) have been using these every same overnight markets to finance strategies where say U.S. Treasuries are purchased versus the sale of interest rate futures contracts. The strategy there is to increase the size of the trade through the use of the purchased Treasuries to then secure cash loans (in order to finance the greater size of the trade) in this repo market that we just told you has becomes cash scarce.

I glance at my screen early this morning, and I see Target (TGT) trading off more than 3% in the overnight session. Remember that short that I was going to clean up? Well, I did clean up the derivative positions that had collared performance. I also bought back half of the short when I did that in order to manage the risk. Bottom line... I am still short half of a position, and the stock is trading in the hole. I may cover these before the open, just to make sure that I still book the win, and given that I do like Target going forward. 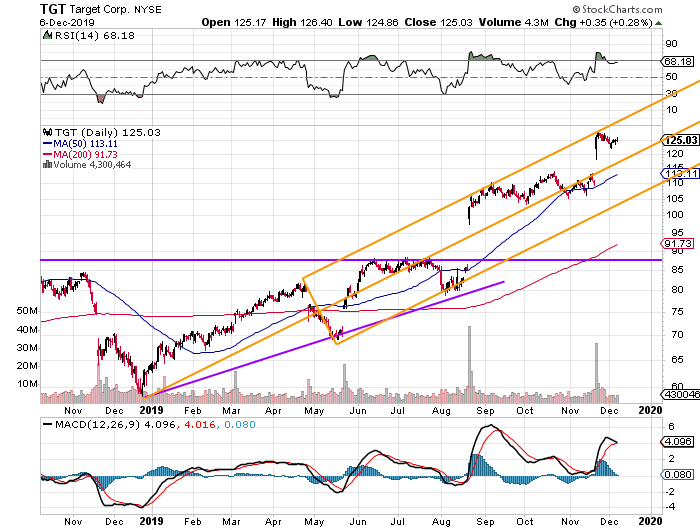 Here, readers see the wonderful breakout of the ascending triangle in late August. followed by another breakout in November. Note that at no time has the upside momentum been able to crack the upper trend line of the Pitchfork.

Thanks to the delay on Friday in between the time that I wrote the Ulta Beauty (ULTA) piece and certainly not my skill as a trader, I ended up with a much higher net basis on that short than I expected. Still, my execution on the trade was less than spectacular, and I never got a chance to put the options related trades on. 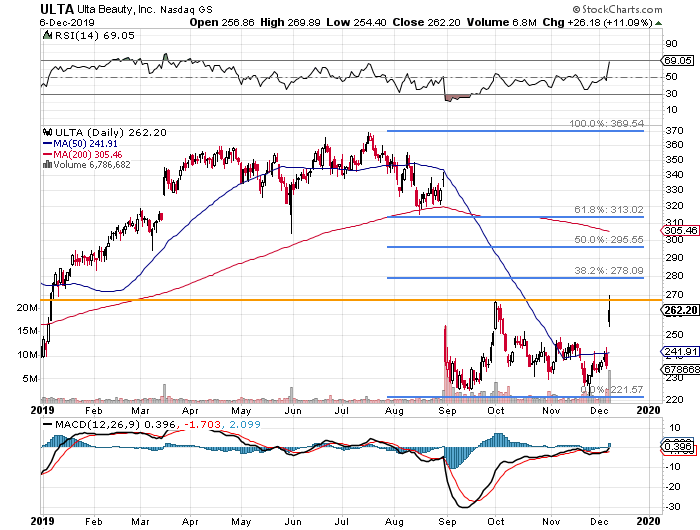 These shares closed well off of the highs of the session (fortunately) on Friday at $262.20. My net basis, currently stands at $267.25. If I can put this whole thing to bed below 260, I'll probably never lock in a trading range for the cover and just take my football and go home. These shares are not moving in the pre-open, so I am not sure how much I trust the late Friday selloff to hold. I also cover these should they move higher and threaten the P in my P/L.

There are no significant domestic macro-economic data-points scheduled for release today.

The Fed remains in blackout through Wednesday afternoon.

(Microsoft and Apple are holdings in Jim Cramer's Action Alerts PLUS member club. Want to be alerted before Jim Cramer buys or sells MSFT or AAPL? Learn more now.)

Get an email alert each time I write an article for Real Money. Click the "+Follow" next to my byline to this article.
TAGS: Federal Reserve | Gold | Interest Rates | Investing | Markets | Stocks | Technical Analysis | Trading | Treasury Bonds | China