This very thin stock is well under the radar, but it has the potential to offer some of the most important data for mid-stage biotechnology stocks later this year.

Biotechnology stocks can be very challenging to trade. Most of the time the key factor that determines their movement is expectations for the next data they may issue on key drugs under development. The stock can trade quite erratically when the data isn't due for months, especially if it trades little volume.

One stock that is trading that way right now is Forte Biosciences (FBRX) . It is driving around in a $10 point range and has an average daily volume of just around 65,000 shares. This stock is going to continue to trade erratically until it releases data sometime around mid-year.

An analyst at Chardan, Gbola Amusa, has set a price target of $115 on the stock and reiterated his buy rating after third-quarter earnings. He writes that "a positive Phase II result for FB-401 in 2021, if consistent with FB-401's prior phase I/IIa published data, would prove to the one of the most important readouts for a mid-stage biotech company in 2021 and would catalyze performance of the entire microbiome medicines space, with 'considerably more upside' for Forte." 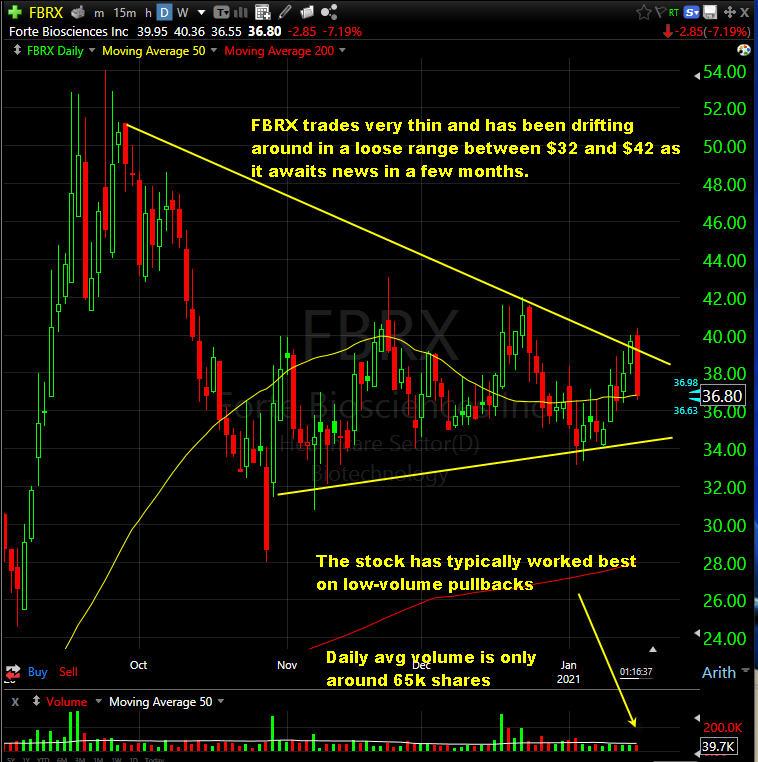 Forte's sole clinic candidate is FB-401 for the treatment of atopic dermatitis, which is the scientific name for eczema. Eczema is an incurable inflammatory skin condition characterized by itchy, dry, scaly, rashy skin. There are around 20 million patients that suffer from it in the U.S., roughly half of them are children.

FB-401 is a water-based spray containing three-different strains of bacteria that have been shown to help repair tissue and reduce inflammation. The use of the microbiome in this manner is viewed as a key theme in biotechnology in the years ahead.

I believe it is likely that the FBRX story will gain traction within the next few months as investors look ahead to a mid-year readout. The company had positive data on September 9th that caused the stock to nearly double in a few weeks. I'm looking for a similar move on the next report. The company has FDA Fast Track Designation.

There is no rush to buy these shares as it will be a long wait until data hits. I've been a periodic buyer on weakness and a seller into strength and will continue that approach until we are closer to the data readout

Get an email alert each time I write an article for Real Money. Click the "+Follow" next to my byline to this article.
TAGS: Investing | Stocks | Technical Analysis | Trading | Biotechnology