Back on August 4 we checked out the charts of Aurinia Pharmaceuticals (AUPH) and wrote that "The charts of AUPH are weak and pointed lower. Avoid the long side." That advice was terrible as prices quickly rallied and almost tripled by late October.

How do the charts look now? Let's check.
In this updated daily bar chart of AUPH, below, we can see that prices quickly gave up their earlier gains. A three month decline followed a three month rally. AUPH has recently rallied to test the underside of both the 200-day moving average line and the 50-day moving average line.
The On-Balance-Volume (OBV) line improved from July to the end of October and then stayed relatively stable as prices declined the past three months. A stable OBV line where prices decline suggests that a stock is falling of its own weight and sellers are not particularly aggressive.
The 12-day price momentum study shows a higher low from November to January even as prices made a lower low. This is a bullish divergence and tells us that the pace of the decline slowed.

In this weekly Japanese candlestick chart of AUPH, below, we see a mixed chart. Prices made a bottom reversal pattern in January with a long-legged doji at the low. AUPH has rebounded to the 40-week moving average line.
The weekly OBV line shows weakness from late October and is weaker looking than the daily line.
The Moving Average Convergence Divergence (MACD) oscillator is close to crossing the zero line for an outright sell signal but it has been narrowing in recent weeks. Mixed.

In this daily Point and Figure chart of AUPH, below, we can see a potential upside price target in the $24-$25 area. 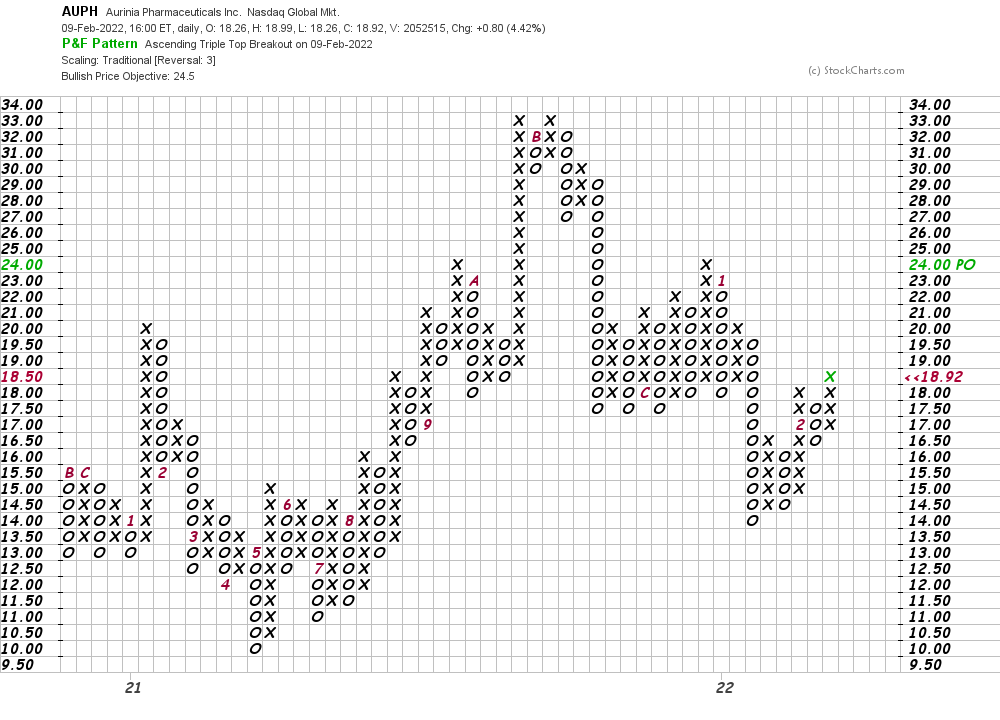 In this second Point and Figure chart of AUPH, below, we used close only weekly price data and here the software projects a possible downside price target in the $5 area.

Bottom line strategy: This bio-pharmaceutical company is set to report its latest numbers on February 28. Prices look like they can bounce further to the upside in the short-run but the longer-term picture is problematic. Obviously my last recommendation to stand aside did not win me any fans. Unfortunately, I am a broken record today and would continue to avoid the long side of AUPH.
Get an email alert each time I write an article for Real Money. Click the "+Follow" next to my byline to this article.
TAGS: Investing | Stocks | Technical Analysis | Trading | Biotechnology | Pharmaceuticals