Last Monday, equity markets came off of a ferocious Friday beating to stabilize. The inversion of the yield curve would move from the novelty of wonder to cemented fact over the week that followed. Still, stocks would process a short-term bottom through the early part of the week. By this past Friday, markets methodically took back virtually all of the ground lost a week earlier. The catalyst? Some possibly misguided optimism concerning the U.S./China trade relationship.

Impressive? Not so much, really. For the month of August, the S&P 500 gave up 1.8%, outperforming a Nasdaq Composite that moved 2.6% to the downside. Both of our broader equity indices remain unable to take their persistently resistant 50 day simple moving averages. Take a quick look at the recent similarity.

Anyone who has ever played any sport knows the feeling. I imagine it must feel the same way for those who sing, dance or act before a live audience. Butterflies. Nervous energy. Play the field in front of you. Use that energy to bear down... to do a great job that you know is a great job while you are doing it. We are all smart enough. We are all highly motivated, truly dedicated, hard charging fire-eaters, so let's charge hard. Let's take that field, that stage, the environment. Being lucky is nice, but obviously not sustainable. Excellence is a lifestyle choice. Choose wisely.

Equity index futures are trading lower on Tuesday morning. That should come as no surprise given the now dissipated boost that equities likely experienced from a monthly pension fund re-balance. This should also not surprise given the U.S. implementation on Sunday of 15% tariffs on roughly $110 billion in Chinese imports that widely impact consumer goods such as apparel and electronics. Yes, Apple (AAPL) will feel some impact, where the Apple Watch and AirPods are concerned. China targeted U.S. soybeans, crude, seafood, and pharmaceuticals with increased tariffs of between 5% and 10% in response, while lodging a complaint with the World Trade Organization. So much for possible delays. So much for no retaliation. Just who is retaliating to what will not matter on Main Street.

I have repeated often that nothing positive gets done here until at least October at the earliest, and probably later than that. Perhaps much later. Keep your eyes on October 1st. This is not only the next trade war deadline, as President Trump has expressed an intention to take the existing 25% tariff on $250 billion worth of Chinese goods up to 30%. More importantly, this will also be the 70th anniversary of Mao Zedong's Communist forces achieving military victory over Chiang Kai-shek's Nationalist army, the former taking control of the mainland, the latter retreating to Taiwan. The communist party is expecting to make a big deal of this anniversary, and President Xi, though technically president for life, can not go into this event looking weak publicly. Remember, retention of power is likely a much higher priority here than economic performance, and the protests across Hong Kong present a significant black eye.

The Minds of Pretenders

Make no mistake. The Chinese almost certainly feel pressure to clean up what has transpired in Hong Kong prior to October. The matter in which this is accomplished will almost certainly impact any potential for the U.S. and China to reach an amicable agreement on trade, even if a short-term solution is prioritized over substantive problem solving. For those keeping score, according to the Stock Trader's Almanac, September has been the worst month on average for all of the broad major indices, going back to the mid-twentieth century. Expect another rough September? I think (not much of a reach) that a month of exaggerated volatility would be more likely than not.

On top of trade (non) negotiations with China, there is still that inverted yield curve. The U.S. 10 year note yields 1.47% this (Tuesday) morning. On Friday, we learned that core inflation as measured by the Bureau of Economic Analysis PCE Price Index "soared" in July to 1.6%. Yes, my loyal and faithful warriors, you indeed are living in a "real" negative rate environment, and that's a 10 year yield. Most of your savings have lived in this environment for what qualifies as an "era" by now.

Part of the problem (actually a major part) has been the FOMC's inability to interpret global conditions, and implement what would be timely and appropriate monetary policy in this environment. Fed Chair Jerome Powell speaks this Friday from Zurich. Before we get that far, investors will hear from seven Fed speakers (four voting FOMC members) Tuesday evening through Wednesday in addition to the release of the Beige Book that afternoon. The lethargic and very late attention paid to the yield curve by the central bank has left the US dollar nearly defenseless versus upside pressure felt from peer reserve currencies. One British Pound buys $1.19, and one Euro buys $1.09 as I write through the zero dark hours on Tuesday morning. China's yuan approached nearly 7.2 to the US dollar earlier today. That's clearly detrimental to large cap corporate earnings as well as on the already struggling U.S. manufacturing sector. This damage is on the Fed. Nothing like simply not realizing that the world is indeed a competitive place. Congrats.

Those making an attempt to survive the marketplace on a daily basis already know that algorithmic control over the point of sale has left price discovery overly sensitive to short-term news flow. You all see it over and over again... overreaction in one direction or the other based on keyword readers followed by momentum bots. Has uncertainty ever been higher? We all think not in real time. My guess is that some 18 year old kid on the beach at Iwo Jima in February of 1945 may have had it a bit worse than we do. So, buckle your chinstraps, buttercup. If it gets rough, so will we.

S&P 500 earnings have already posted back to back negative growth earnings seasons. Remember all that talk about there being no earnings recession. Yeah, mostly by those with no skin in the game. Global weakness matters. Trade wars matter. Brexit matters. Jobs Day (this Friday) matters. Monetary policy matters. Fiscal policy will matter sooner or later. Hong Kong matters. Hurricanes matter. The point? In the words of my highly esteemed colleague, Arthur Cashin of UBS Financial Services... "Stay nimble, my friends."

Three Stocks Trying To Break Out

One of the most interesting tasks for those coming back from a week off is the intense day long Sunday (in this case, Monday) marathon cram session the night prior. The Sunday night cram is a weekly tradition in the field of business and economics that truly intensifies when one has been away for a few days. Doing my evening chart work, among my current and recent positions, I found several issues that clearly benefited from last week's action.

These three names will either hit resistance or hurdle immediate pivot points in as traders (or bots) try to form a technical breakout. Have a glance at three examples. 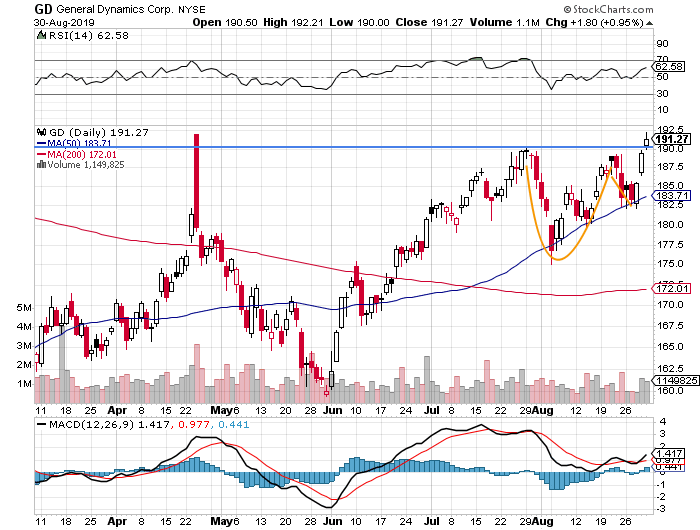 General Dynamics (GD) surpassed pivot on Friday. The name comes off of a well-formed cup with handle, while riding the 50 day SMA all the way from the tough to the present. I am long the name. 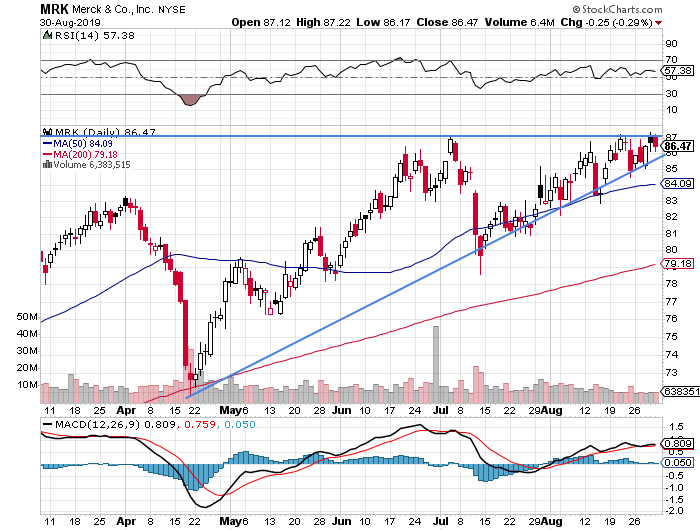 Merck (MRK) , while also riding it's own 50 day SMA, has formed what is known to traders as an ascending triangle that goes back at least as far as early July, and perhaps as far back as April. The closing of this wedge is seen by traders (at least by this one) as the fore-bearer of violence. What direction. The chart tells me higher. That's why I am long this name. Volatility is a surer bet than is direction here. 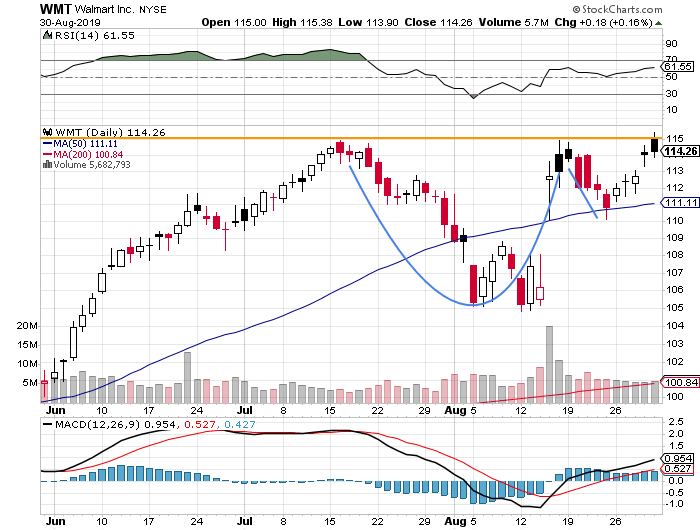 Walmart (WMT) presents as another fine example of a well-formed cup with handle pattern. I am no longer in this name, having taken profits and filled that spot in my portfolio with Target (TGT) . This certainly was not the wrong move to make. Target has been a home run. That said. Walmart now trades above where I got out. I must ask myself... "Can I make room for the two of them?" ... "Does that leave me too exposed?"

I'll tell you what I think. I am not buying Walmart right here. I will consider grabbing something smallish should these shares either take pivot and then pass at least one test from the upside, or approach the 50 day SMA (111).

Get an email alert each time I write an article for Real Money. Click the "+Follow" next to my byline to this article.
TAGS: Federal Reserve | Investing | Markets | Options | Stocks | Technical Analysis | Trading | China

Welcome to the Wild, Wild Market

The end of the quarter brings crazy moves, but can they be blamed for Tuesday's decline? Let's see and let's see why I think we can rally again before the quarter's over.