During Friday night's Mad Money program host Jim Cramer mentioned that there are some companies with confusing outlooks such as AbbVie Inc. (ABBV) , which acquired Allergan. Allergan's focus has been with Botox and cosmetic surgeries, which are also on hold.

Let's check out the charts of AbbVie, which is an Action Alerts PLUS holding.

In the daily bar chart of ABBV, below, we can see that prices retreated to the August lows before rebounding in recent sessions. Prices broke below the declining 50-day moving average line and the slightly declining 200-day moving average line. ABBV has rallied back toward the underside of the 200-day line and could stall around there or the underside of the late January low.

Trading volume increased in March and the daily On-Balance-Volume (OBV) line broke to a new low for the recent move down and showed a bearish divergence back in February when prices made new highs but the OBV line did not. The Moving Average Convergence Divergence (MACD) oscillator gave a cover shorts buy signal but has a lot of ground to recoup before testing the underside of the zero line.

In this weekly bar chart of ABBV, below, we can see that prices might be making a double bottom pattern when viewed from a longer-term perspective. The 40-week moving average line is still in a positive trend. The weekly OBV line is in pretty good shape and the MACD oscillator is still above the zero line.

In this daily Point and Figure of ABBV, below, we can see an upside target of $99. 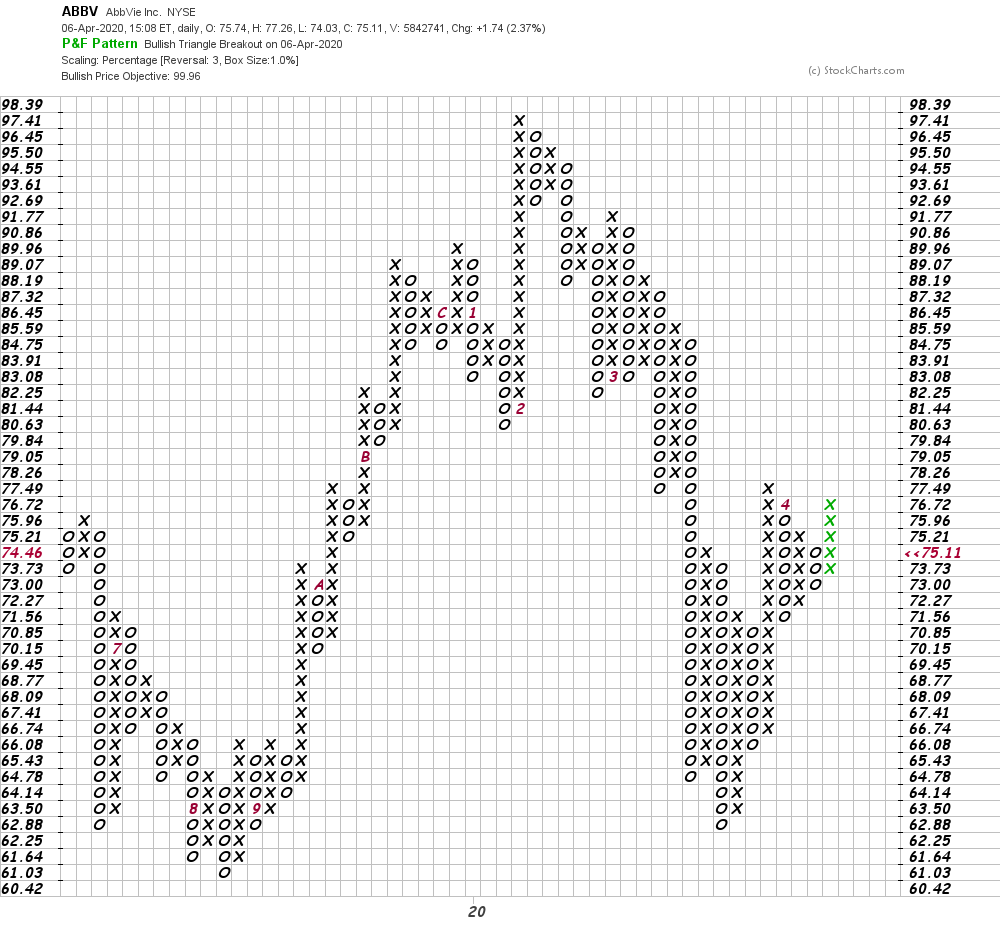 Bottom-line strategy: ABBV could make a strong come back in the weeks and months ahead -- we have a $99 Point and Figure target but there is a fair amount of overhead resistance to overcome. If you want to go long ABBV you will have to risk below $65 in my opinion -- basically allowing for a retest of the March low.
Get an email alert each time I write an article for Real Money. Click the "+Follow" next to my byline to this article.
TAGS: Investing | Technical Analysis | Healthcare | Pharmaceuticals | Mad Money