Freda attributed Estee Lauder's success to one thing: quality. He said marketing will get consumers to try your product, but only quality will get them to purchase it again.

When asked about their strong sales, Freda explained that with people working from home, they have more time to pamper themselves. People also still want to look good in their video meetings, he added.

Finally, Freda said that sales in Asia continue to be a strong driver of growth.

We looked at EL back on May 4 and wrote that, "The charts and indicators for EL are constructive and aggressive traders could probe the long side risking a close below $160. The $210 area is our target." Prices reached our $210 target by August and have kept climbing.

Let's look at some updated charts.

The trading volume has been active but uneven since early November and the On-Balance-Volume (OBV) line has declined since the middle of November. A declining or weak OBV line suggests or tells us that sellers of EL have been more aggressive - unusual as prices have moved higher. The OBV line shows improvement lately so maybe a turn higher has begun.

In this weekly bar chart of EL, below, we see a mixed to positive picture. Prices are in a longer-term uptrend above the rising 40-week moving average line. Trading volume has been diminishing since the March/April time frame and the OBV line has been stalled/neutral since June. The MACD oscillator crossed to the downside in early January but now looks like it is reversing to the upside again.

In this Point and Figure chart of EL, below, we used daily price data. The gap is gone and we can see the upside breakout and a potential price target in the $360 area. 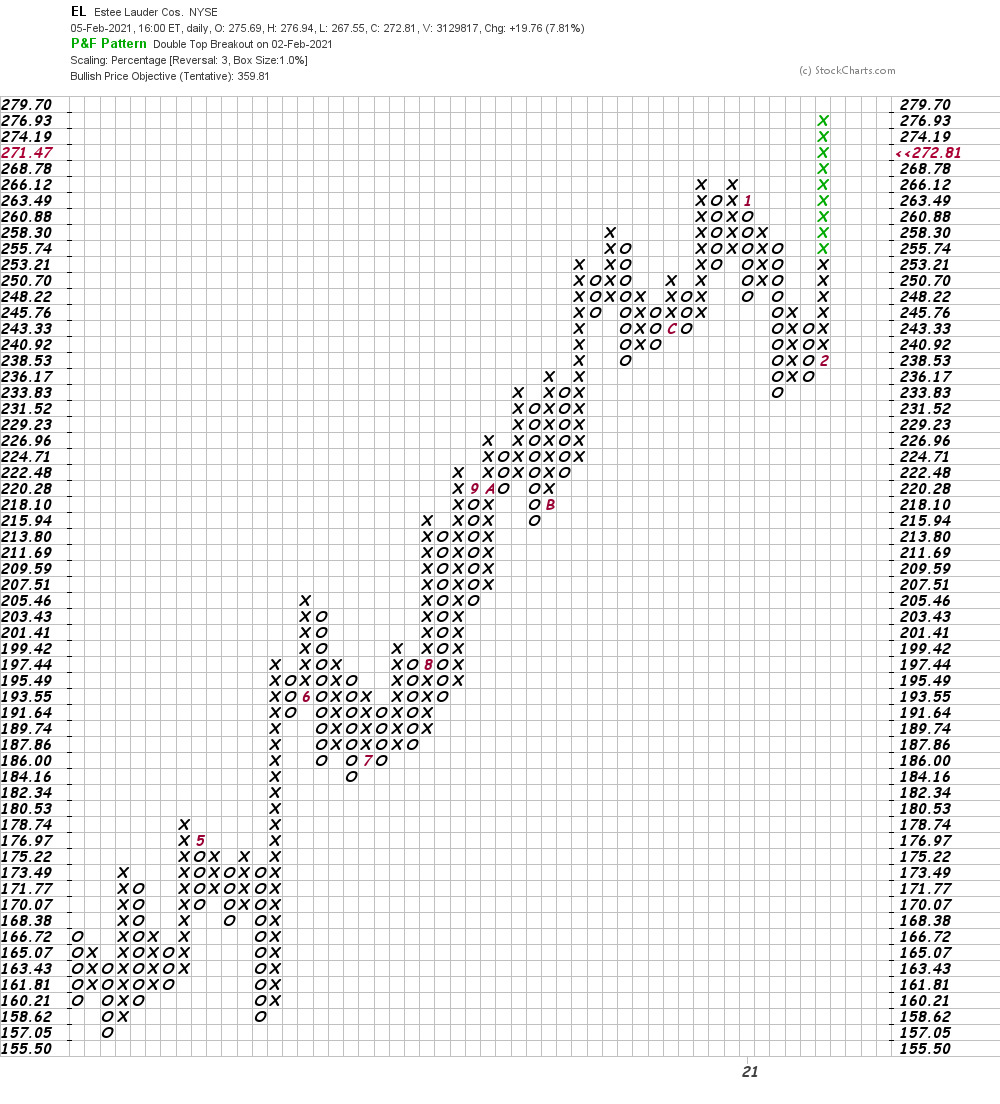 Bottom line strategy: I don't normally chase after a stock that has gapped higher. I like to see a bit of sideways trading to see what sort of sell stop to recommend and see how aggressive traders might be on profit taking. Buyers should risk to $259 now but if support develops around $270 and EL moves higher then a closer stop could be recommended. $300 and then $360 are the price targets.

Get an email alert each time I write an article for Real Money. Click the "+Follow" next to my byline to this article.
TAGS: Earnings | Economy | Investing | Stocks | Technical Analysis | Trading | Asia | Mad Money | Executive Interview | Consumer Products