For his second "Executive Decision" segment of Mad Money Friday night, Jim Cramer spoke with Tarang Amin, chairman and CEO of e.l.f. Beauty (ELF) , which found itself in a proxy fight with activist investor Marathon Partners.

Amin said ELF is performing well. The declines the company saw in 2018 were a real wake-up call. Since then, they've focused on five new initiatives and have enjoyed five consecutive quarters of year-over-year sales growth.

When asked about the effects of the pandemic, Amin said they did initially see declines, but over the past four weeks consumption is up 11%. He said their partnerships with Target (TGT) and Walmart (WMT) continue to perform well. Both Walmart and Ulta Beauty (ULTA) are expanding their ELF footprint within their stores.

We haven't looked closely at the charts of ELF since the the middle of last year , were we wrote that "ELF has been making a base pattern the past 11 months and an upside breakout seems likely. Traders could probe the long side at current levels risking to $11 while looking for gains to around $21." Traders got two chances to take profits around $20. Let's check out some up to date charts of ELF.

In this daily bar chart of ELF, below, we can see a very steep decline for shares from February into March. Prices bounced in late March and then made a "classic" retest of the March low in early April. ELF has since rallied nicely and is back within "striking distance" of the highs.  Prices are above the rising 50-day moving average line and the bottoming 200-day moving average line.

The trading volume has been active since February and the On-Balance-Volume (OBV) line has been rising from April.

The Moving Average Convergence Divergence (MACD) oscillator is in a strong bullish alignment above the zero line.

In this weekly bar chart of ELF, below, we can see what looks like a possible double bottom pattern from around $8. A weekly close above $20 will give us a breakout. Prices are above the bottoming 40-week moving average line.

The weekly OBV line shows a similar double bottom pattern and the MACD oscillator has crossed to a cover shorts buy signal.

In this weekly close only Point and Figure chart of ELF, below, we can see a potential upside price target in the $33 area. 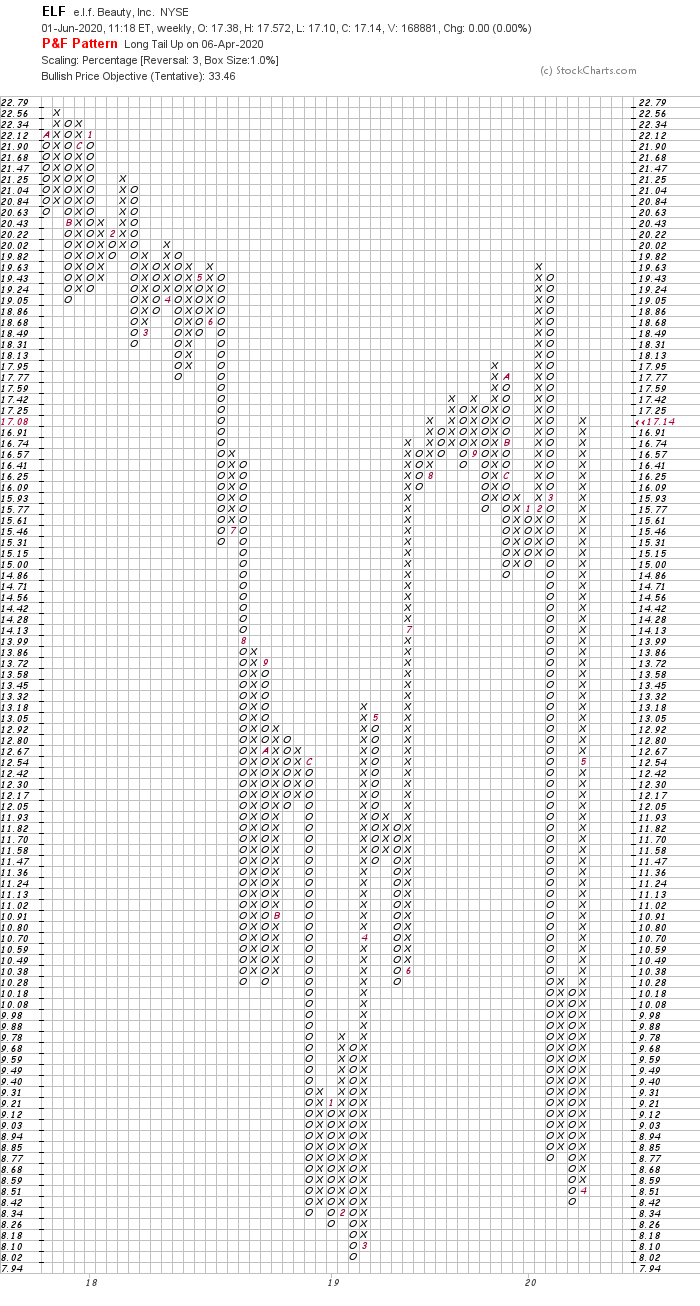 Bottom line strategy: ELF looks like it can rally further. Aggressive traders could go long at current levels risking a close below $15. Add to longs above $20 looking for gains to the $33 area longer-term.

Get an email alert each time I write an article for Real Money. Click the "+Follow" next to my byline to this article.
TAGS: Economy | Investing | Stocks | Technical Analysis | Trading | Personal Products | Mad Money | Executive Interview