Kurtz said it's no surprise that CrowdStrike was ranked No. 1 in the "Fortune Future 50" list for 2021.

Kurtz added that most cyber attacks occur because companies are using legacy systems that just can't keep up with the speed at which attacks are occurring. That's why CrowdStrike deploys artificial intelligence for endpoint protection.

CrowdStrike is also growing by selling more software to existing clients. Kurtz noted that 60% of its customers now have more than four modules from CrowdStrike which is another testament to how well CrowdStrike protects.

We reviewed the charts of CRWD on November 29: "In our November 15 review of CRWD we wrote, "Avoid the long side of CRWD but I would not expect a decline to $208. Maybe the August low around $225 holds." It does not look like $225 will hold now so be prepared for further weakness in the weeks ahead."

Prices bounced Thursday after better than expected earnings but has that changed the charts?

In this updated daily bar chart of CRWD, below, we can see that prices broke the August low around $225 as anticipated and continued to trade lower. The slope of the 50-day moving average line is still negative and now the slope of the 200-day line is bearish.

In this weekly Japanese candlestick chart of CRWD, below, we continue to see a bearish picture with the string of red real bodies (bearish) telling us that the sellers are in control. The 40-week moving average line is cresting. The weekly OBV line is in a decline and the MACD oscillator has shown weakness since February.

In this daily Point and Figure chart of CRWD, below, we can see a nearby downside price target in the $198 area. 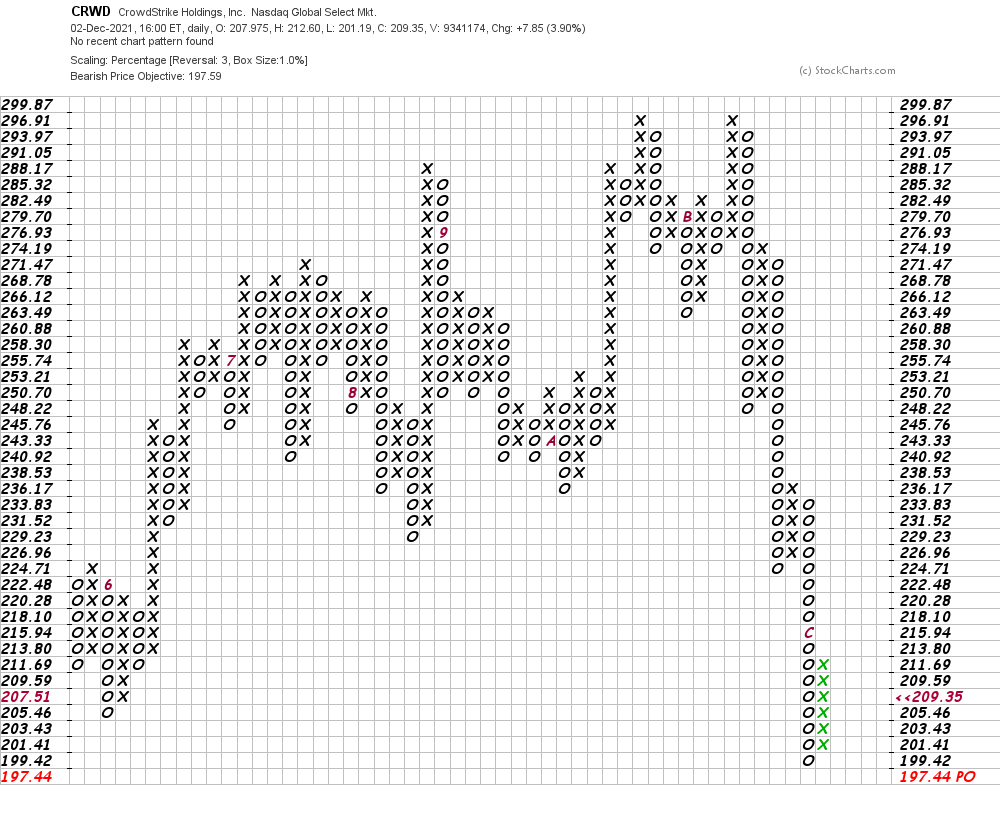 In this weekly Point and Figure chart of CRWD, below, we can see that the software is projecting a potential decline to the $100 area.

Bottom line strategy: CRWD could bounce further in the short-run but the charts and indicators currently suggest that further weakness is possible. I am content to stay on the sidelines and see how things develop.

Get an email alert each time I write an article for Real Money. Click the "+Follow" next to my byline to this article.
TAGS: Earnings | Investing | Stocks | Technical Analysis | Trading | Cybersecurity | Mad Money | Executive Interview