Dr. Jonas said that postpartum depression is the most common complication for women after childbirth, and suicide remains a leading cause of death among adults overall. The standard treatment for postpartum, which includes antidepressants, can take weeks to become effective. Zulresso is fast acting.

Jonas added that depression is not just about the mom, it's multi-generational and affects the child, the spouse, the extended family and beyond. Lost days at work affect our economy and suicides can affect entire communities. Everyone has the right to get better, Jonas concluded, and he welcomes more innovation in the vital area of mental health. I know from personal experience with one of my daughter-in-laws that this is a real issue.

Let's review the charts this morning.

In this daily bar chart of SAGE, below, we can see some "jumpy" movement with prices and the indicators. Prices trade sideways from March to early September but the indicators weakened significantly.

Yesterday's price action was a large "outside day and lower close" which happens when prices break above and below the previous session and then close weak.

The slope of the 50-day moving average line is negative and the daily On-Balance-Volume (OBV) line turns down sharply in June signaling some heavy liquidation (selling). Prices move lower from early September to late December and then we get an upside price gap in January. Trading volume surges on the price gap but then it falls off from there.

The old saying on the Street is that volume is the weapon of the bull but the bull looks like it was disarmed from January.

The daily On-Balance-Volume (OBV) line does go up into February but then it quickly declines as SAGE trades sideways into March. It looks like the buyers of SAGE in January and February have not stayed with those positions.

The Moving Average Convergence Divergence (MACD) turned bullish in January but then flipped to a take profits sell signal in the middle of February.

In this weekly bar chart of SAGE, below, we can see that prices are above the flat 40-week moving average line. The weekly OBV line shows a long rise from 2016 to August 2018 but since the peak last year it shows a lack of aggressive buying. The weekly MACD oscillator is back above the zero line as of February but the two moving averages of this indicator are narrowing and could generate a bearish crossover in the weeks ahead.

In this Point and Figure chart of SAGE, below, we can see an upside price target but we can also see that a trade at $146.49 will be bearish. 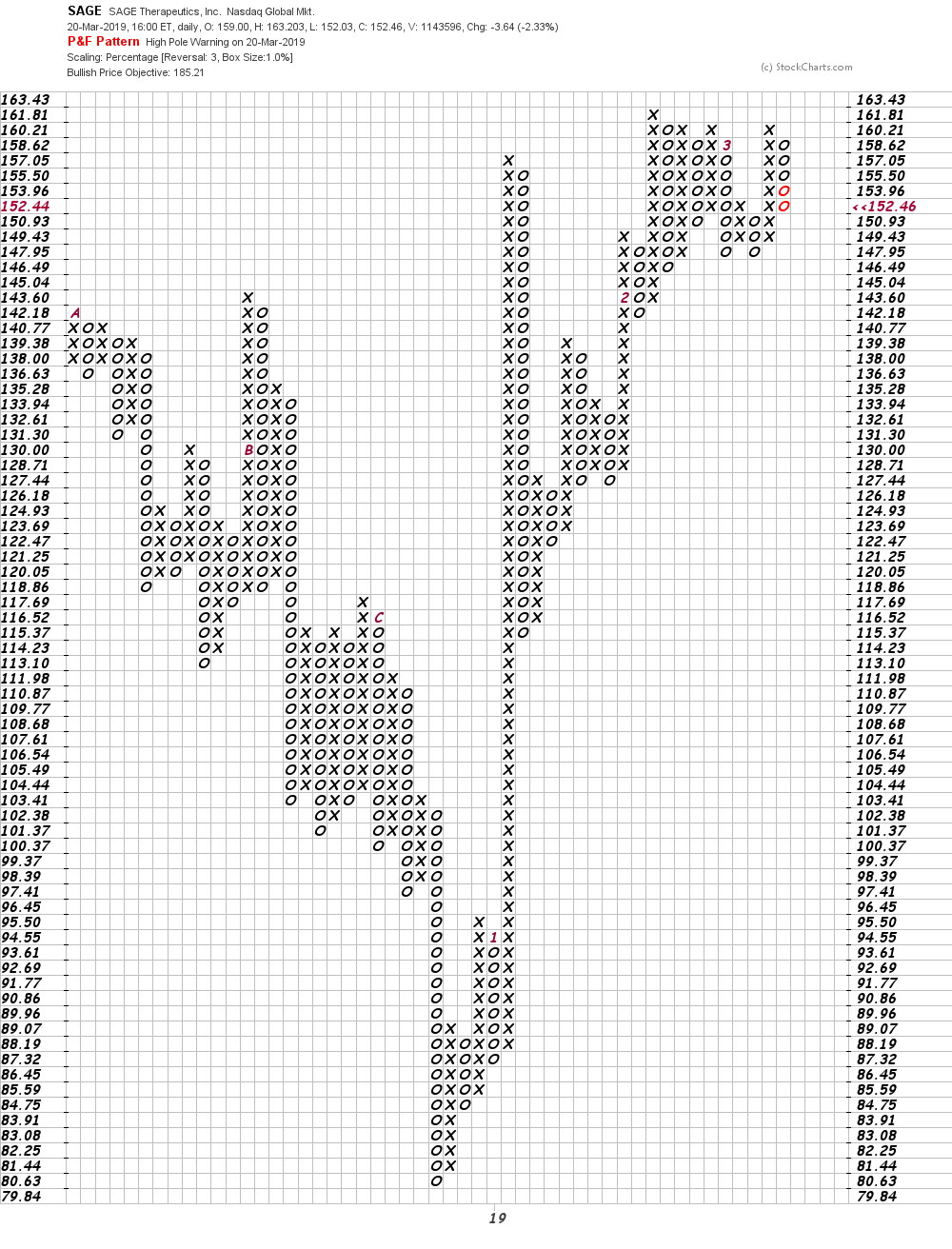 Bottom line strategy: SAGE has an important product and it may do well in the marketplace but the price action of the stock is not particularly bullish and I would take a pass.

Get an email alert each time I write an article for Real Money. Click the "+Follow" next to my byline to this article.
TAGS: Investing | Stocks | Technical Analysis | Trading | Healthcare | Pharmaceuticals