Know what? Trading volume wasn't that light on Monday. Maybe for the S&P 500, volume remained somewhat below it's own 50 day simple moving average, but volume increased at both of New York's major exchanges. On top of that, trading volume directly attributable to constituent components of the Nasdaq Composite did rise to that 50 day line, as that index enjoyed a fourth consecutive day of rising prices on a third consecutive day of rising volume. Hmm. Something going on? Oh, you might say that.

While the Software and semiconductor industry groups were jointly behind the tech sector's momentum, demand for Health Care stocks as well as Communication Services type names took not only that Nasdaq Composite to it's second highest close ever, but the S&P 500 to the apex of it's "forever chart." Can the broadest of U.S. large cap equity indices go even higher? Of course they can. What can still go wrong? Oh, plenty.

That said, markets have had to play catch up. As the year winds down, a number of issues that at first (or second or third) glance had been market headwinds. These very same issues have proven to add a bit of wind behind the market's proverbial sails. The winds of change? Well, a shift in the wind's direction anyway.

1) It has become apparent that Presidents Trump and Xi of the U.S. and China respectively, are truly making an earnest effort to sign some kind of "phase one" compromise when they meet in Chile in about two weeks. Conditions can only get better if they stop getting worse first. This is the fountain of global hopium.

2) It has become apparent that the Federal Reserve, while addressing the liquidity crisis in overnight markets, is using this event as an opportunity to make a serious attempt to repair the yield curve. How important was it to target the short end of the curve with a balance sheet expansion program while allowing the bond market to take control of the long-end? Priceless. In fact, simply that smartest implementation of a policy tool put into place by any major global central bank in a very long time. Maybe since Volcker forced the squeeze on consumer level inflation. Yeah, that long.

3) It has become apparent that the UK and the EU will play ball on at least making an improved effort to get the UK out of the EU in an orderly manner.

4) It has become apparent that U.S. dollar exchange rates have also relaxed as that yield curve has made great strides toward normalization. The U.S. dollar comes with built in safe haven value that fluctuates as does the global condition. The world allows the dollar to catch it's breath? Well... no secret, everything priced in U.S. dollars, also catches a break.

5) It has become apparent that Q3 "earnings season" might be a bit less awful the feared. Why? Because corporate America has become even leaner and meaner. As sales have wobbled in spots, profits have been more consistent than thought. Firms have learned to do more with less. Execution has been for the most part, excellent. Even where margins have been squeezed, this has been in many cases due to well explained increases in capital expenditures and not due to sloppy execution.

6) It has become apparent that a whole lot of folks were positioned incorrectly. I am not just speaking of misallocation across sectors. This is a far deeper level of error, that could now end up forcing a year end chase for performance. Let me explain.

This May Leave A Mark

Back in mid-October, data released by Morningstar showed that investors had pulled a net $60 billion out of stock funds in the third quarter. This would be the largest quarterly outflow for equity funds in 10 years. During this same period, a net $118 billion poured into bond funds, and a whopping net inflow of $225 billion moved into money market funds.

On Monday, a report released by Goldman Sachs shows that over the past 12 months, U.S. equity funds have suffered net outflows of $173 billion. This would be while a net $259 billion moved into bond funds, and again... a net $592 billion moved into cash funds.

Did I already mention that equity markets are at all-time highs, and that the winds of change do appear to have done just that... shifted. I understand reacting to a yield curve that had been inverted for months. I understand reacting to macroeconomic data that certainly seems less than robust in spots. I had been defensive myself until the 3 month/10 year spread uninverted. Still, defensive positioning stands a long way from completely vacating equities. In fact, playing defense is what had worked best for most of the year.

Who Am I To Judge?

Hey, I'm not. Not what? I'm not here to judge. Just to try to interpret the marketplace for myself, and then tell you kind folks what I think, and this is what I think. Yes, these headwinds turned tailwinds could turn back into headwinds. Presidents Trump and Xi could not sign something in Chile. Spotty weakness in U.S. macro could seep into the labor market, and thus... force the consumer to reverse course, which would put the whammy on housing as well. The Fed could try to sound hawkish at the post-policy meeting press conference on Wednesday (tomorrow). Heck, there is still a lot that can go wrong.

That said, if various conditions around trade, and economic growth do not get worse, or maybe get better, and corporate execution remains simply excellent, there will have to be a chase for performance. You and I both know that I am not always right, but I do always tell you what I honestly think. I think there are a whole lot of financial advisers who are about to get an earful from their angry clients.

Beyond Meat (BYND) reports a surprise profit on sales that keep growing wildly, and raises full-year forecasts. Everyone I talk to seems to like the stuff. I would not know, myself, but I certainly do not scoff at the idea of plant-based meat substitutes. If there was not a sizable addressable market, the competition would not be building as quickly as it is.

For those of you who also hung on to your short positions through Monday night's earnings release based upon the belief that Tuesday's lock-up period expiration might bring more shares into the secondary marketplace, the question becomes... "Just how far do we push this thing?" I mean they do have a nice business. There is demand. The shares are in my opinion overvalued, but markets pay for growth, and growth here is not soft. I'll tell you this, I have never thought of myself as some kind of short selling expert, but this earnings, my best trades have all come from that side, though this was the first one that I rode into the event already short. 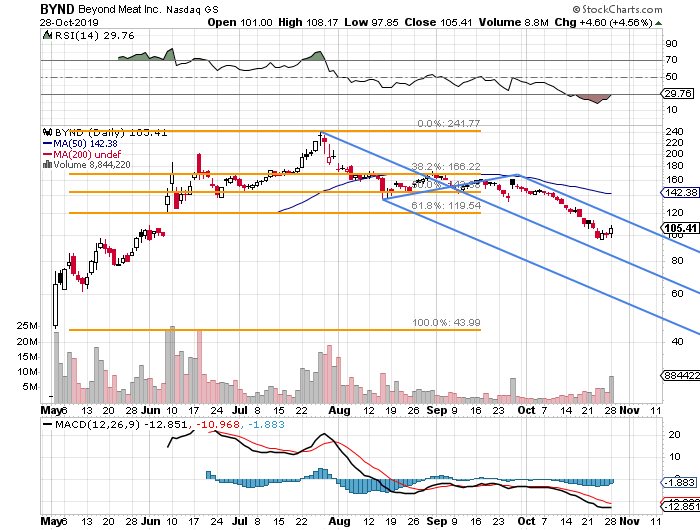 This chart shows that after a minor attempt had been made to support the stock at both 50% and 61.8% retracements of the May through late July rally, that the shares found no new friends until some shorts look like they may have panicked ahead of Monday night.

If fellow shorts were not a factor, as a trader I would look to the Pitchfork for guidance. I would see the top trend line as my own panic point, so as to ensure a victory, and I would see the central tend line as my target. That said, the last data that we have for short interest in the name runs at 5.6 million shares, or roughly 16% of the entire float as of Monday.

The last sale that I see is close to the $96 level, -9%-ish from Monday's closing price. Bottom line, I don't think that I go for the grand slam on this one. The company is too well run. Likely, I gladly take my ground rules double in this name and move on.

GrubHub (GRUB) . Question? When is an EPS miss of one cent on revenue growth of 30% far worse than just kind of wonky performance on the execution side? The answer would be right now. The firm guided Q4 revenue well below estimates, while guiding EBITDA way, way, way below estimates.

The firm can boast a 29% rise in active diners and a 10% rise in daily active users. However, in a lengthy and painful letter to shareholders, the firm acknowledges that new diners in new market just have not been cutting the mustard, umm... I mean driving as many orders as had been expected.

Listen, the last sale for these shares that I see is in the $38 to $39 range, down 33% or so. That said, as I write this, it's still dark outside and will be for a little while. Though, the numbers were released on Monday night, the earnings call will not be held until Tuesday morning at 9 am Eastern Time. Might as well hear the firm out. We already know that Uber (UBER) Eats, DoorDash, and Postmates, among others, are providing stiff competition. What they do about it is the question.

(BP and Mastercard are holdings in Jim Cramer's Action Alerts PLUS member club. Want to be alerted before Jim Cramer buys or sells BP or MA? Learn more now.)

Get an email alert each time I write an article for Real Money. Click the "+Follow" next to my byline to this article.
TAGS: Earnings | Federal Reserve | Investing | Markets | Stocks | Technical Analysis | Trading | China

Taking a Leap of Faith to Buy Walmart Now

Sorry, Buy-and-Hold Types, but My Concern Isn't Beyond the Next Day or Two

That's how a short-term, long-focused trader operates in a bear market.

The next few weeks could be revealing for the steelmaker from a technical viewpoint.

The Market Is Anticipating Positive Comments From Jerome Powell

However, the wrong remark from the Fed chairman could derail any upward action.

Contrary to popular opinion, since December 1999, shares of small-cap and mid-cap companies posted far superior total returns than mega-cap stocks. Here's what that means for how to invest now.